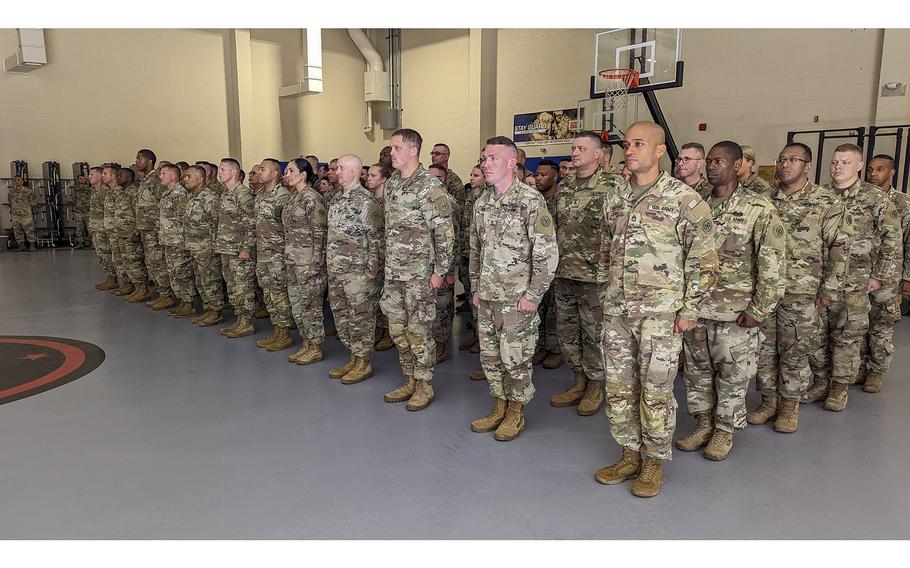 New York Army National Guard Soldiers of the 27th Infantry Brigade Combat Team, who are deploying to Germany as part of the Joint Multinational Training Group-Ukraine, stand at attention during a farewell ceremony at the Thompson Road Armory in Syracuse, New York on July 15, 2022. (Avery Schneider/U.S. Army)

One-hundred-forty soldiers from the 27th Infantry Brigade Combat Team left Friday for Fort Bliss, Texas, to prepare for a trip to Europe, according to a news release by the New York State Division of Military & Naval Affairs.

The soldiers from Syracuse’s 27th Infantry Brigade will replace 160 soldiers from Florida, who have been training Ukrainian military personnel since November — first in western Ukraine and then in Germany in February after Russia began signaling it would invade.

The Syracuse-based soldiers are expected to replace their predecessors in September, after they’ve completed training in Texas, officials for the Division of Military & Naval Affairs said.

The teams from New York and Florida are a part of a multinational training group that formed in 2015, the DMNA said.

The U.S. has been sending troops overseas to help train Ukrainians in waves that have also included teams from Oklahoma and Tennessee, according to the DMNA. Canada, Lithuania, Denmark, Poland, Sweden and the United Kingdom have also helped in the training, officials said.