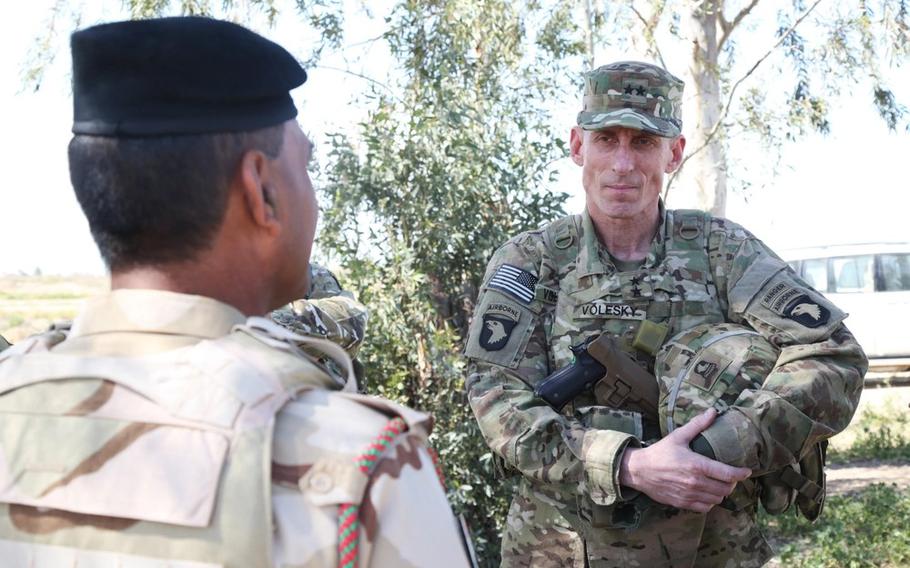 The U.S. Army has suspended retired Lt. Gen. Gary Volesky, its former head of communications, from his mentorship role and placed him under investigation after he posted a tweet that appeared to mock first lady Jill Biden's tweet about the Supreme Court's recent decision on abortion.

The tweet was in response to Biden's June 24 tweet about the Supreme Court's decision to overturn Roe v. Wade, in which the first lady lamented the decision's impact on women.

"Glad to see you finally know what a woman is," Volesky responded in a tweet that has since been deleted, according to USA Today, which reported the news earlier Saturday.

Army spokesperson Cynthia Smith told The Washington Post in a statement that Lt. Gen. Theodore Martin, commanding general of the Combined Arms Center, suspended Volesky from his contract as a senior mentor "pending the outcome of the commander's inquiry." In the role, Volesky was among the retired military officials or senior retired civilian officials who offer mentorship and training to Army officers, staffers and students.

Volesky did not immediately respond to a request for comment Saturday afternoon. The White House declined to comment.

Volesky, 60, is a decorated officer with a long military career. Before he retired from the Army and was hired as a mentor, Volesky commanded I Corps, a major military formation, and led Joint Base Lewis-McChord from 2017 to 2020. From 2014 to 2017, he commanded the 101st Airborne Division, renowned for its role on D-Day during World War II. From 2012 to 2014, he was the chief of the Army's public affairs division.

Volesky served in the Gulf War, the Iraq War, and the War in Afghanistan. He was awarded a Silver Star, the third-highest military combat honor, for his involvement in military efforts in northeastern Baghdad. He is an advisory board member for Unified Business Technologies, an information technology company headquartered in Michigan.

Volesky's reply to Biden's tweet bears echoes of an interaction between Sen. Marsha Blackburn, R-Tenn., and Judge Ketanji Brown Jackson during Jackson's Supreme Court confirmation hearings this year. Blackburn, who has criticized a bill to strengthen LGBTQ protections, pressed Jackson to define the word "woman" in reference to transgender rights.

A movement against transgender rights has gained more traction in the aftermath of the Dobbs v. Jackson Women's Health Organization decision, particularly around the use of the word "women" to describe people affected by abortion restrictions. Many of the movement's supporters — sometimes called trans-exclusionary radical feminists (TERFs) — have decried what they say is the inability to call themselves "women" as gender-inclusive language becomes more commonly used. On Monday, entertainers Bette Midler and Macy Gray were criticized for their anti-transgender comments.

Volesky has posted other political tweets, including a July 2021 reply to a tweet from Rep. Liz Cheney, R-Wyo., in which she announced that she would serve on the select committee to investigate the Jan. 6, 2021, attack on the U.S. Capitol by supporters of then-President Donald Trump. She wrote, "Our oath to the Constitution must be above partisan politics."

Political messages from retired military members are not new.

In 2016, retired Marine Gen. John Allen endorsed Hillary Clinton for president, while retired Army Lt. Gen. Michael Flynn called for Clinton to be locked up, and he later served as Trump's national security adviser before he was fired for lying to federal investigators. In 2019, retired Army Gen. Stanley McChrystal called Trump "immoral" and said he did not believe that the then-president was truthful. Retired Navy Adm. William McRaven wrote a Washington Post opinion article in 2020 criticizing Trump for undermining "every major U.S. institution."