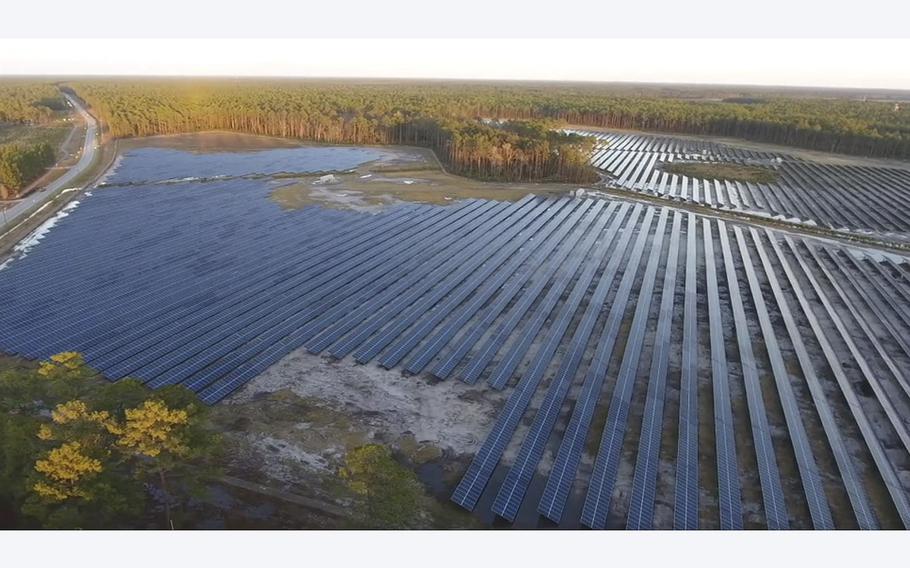 A video screen grab shows an aerial view of the Fort Stewart solar farm on Dec. 6, 2016. Fort Bragg’s energy and utilities branch chief said Wednesday, June 1, 2022, that the base plans to hold a ribbon cutting ceremony for a 1.1-megawatt solar farm floating on top of a lake on Camp Mackall, a Special Forces training site. (Brian Fickel/U.S. Army)

(Tribune News Service) — The largest floating solar farm in the Southeast is just one of several steps Fort Bragg has planned to increase the sprawling army facility’s use of renewable energy, an Army official said Wednesday.

Audrey Oxendine, the chief of Fort Bragg’s energy and utilities branch, said the base plans to hold a ribbon cutting next week for the 1.1-megawatt solar farm that is floating on top of Camp Mackall’s Big Muddy Lake. Camp Mackall is a Special Forces training site.

Speaking at an event hosted in downtown Raleigh by environmental business organization E2, Oxendine said Fort Bragg’s next steps include a microgrid at Camp Mackall, 67 electric vehicles, and exploring placing solar panels on top of parking lots across the roughly 250-square-mile base.

Bob Keefe, E2’s executive director, said the military is likely the largest market-maker in the nation’s economy, a massive purchaser whose needs can spur research and development that has ramifications for everyone.

Keefe asked the audience to think about “what would happen if the biggest user of energy and fuel in the world, aka the U.S. military, were to shift to cleaner sources.”

That’s exactly what the U.S. Department of Defense is trying to accomplish, targeting 100% carbon-free electricity by 2030.

The DoD is trying to curb the effects of climate change — 2018’s Hurricane Florence caused $3.6 billion in damage at the Marine Corps’ Camp Lejuene. But the military also believes that adding renewable energy is important to maintaining mission readiness and reducing costs.

Fort Bragg’s electricity bill alone is about $40 million a year.

“We’re constantly looking to try to reduce that and to be able to have renewable energy,” Oxendine said.

Fort Bragg’s peak demand is about 132 megawatts, and while the floating array is promising, Oxendine said, “We don’t have enough lakes on Fort Bragg to get there.”

The solar canopies that Bragg is considering would allow the base to add panels on top of land that has already been cleared, meaning Army officials wouldn’t have to worry about sacrificing additional training ground or threaten the red-cockaded woodpeckers that are found around the base.

Duke Energy won the contract to build the solar panel project, with Ameresco acting as a primary contractor. Ameresco officials estimated it would save Fort Bragg about $2 million annually, cutting electricity use by 7% and water use by 20%.

In addition to the solar array, the Camp Mackall project includes two megawatts of battery storage that can be used when there are local power outages, as well as energy efficiency upgrades.

Having the on-site electricity generation is important, Oxendine said, because there is one electricity feeder line that runs to Camp Mackall. If something were to go wrong with that line, Oxendine warned, it could impact the training of Green Berets.

“These classes are scheduled years in advance,” Oxendine said, “and if we cancel them, then that opportunity for that soldier is gone.”

Greg Gebhardt, a Duke Energy strategic account manager, stressed that interest in renewables is not limited to the military. Gebhardt, a u.S. Army veteran who served on Fort Bragg, is a former Republican candidate for lieutenant governor.

In his role at Duke, Gebhardt works with Fortune 50 companies, many of whom, he said, have a growing interest in renewable energy. Recently, he added, a company approached him to ask about a microgrid that could provide power in the event of an outage.

“Down time is lost money,” Gebhardt said, “and in today’s day and age where everyone’s looking to cut costs to save money, it’s very important to them.”

This story was produced with financial support from 1Earth Fund, in partnership with Journalism Funding Partners, as part of an independent journalism fellowship program. The N&O maintains full editorial control of the work.