Across the military, basic training is changing with a focus on mentorship, not yelling 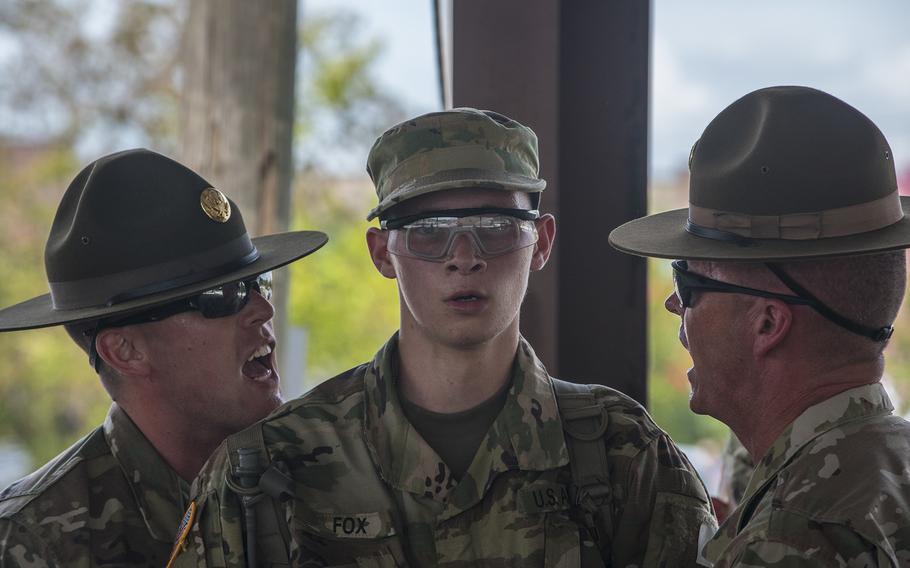 (Tribune News Service) — More than 40 feet up the tower at Fort Jackson, Army recruit Robert Smith missed setting his feet on the 4-by-4 plank from which he was to start rappelling down.

“I said: ‘Sergeant, what should I do?’ I was kind of scared. And sergeant said: ‘Trust your equipment. Now straighten your legs.’ Then he said: ‘Now wave at me,’ I waved. ...

“I’m going to remember that for the rest of my life.”

Smith made it down.

Waving was not a dare or an act of bravado, his drill sergeant, Staff Sgt. Joseph Flanagan said later. Rappelling — walking down a wall or cliff with a safety rope — involves two hands. One is kept behind the back as a brake, the other is used to manage how quickly the rope moves as the rappeller walks down. Waving with that hand is meant to demonstrate how securely the brake hand holds you in place.

Smith was new to the Army — about two weeks in, and the tower came on his first day out of the Army’s new “Yellow” phase.

Yellow phase is the result of a reordering of basic training schedules during the pandemic, a rethinking by the armed forces of how a select group of NCOs should bring tens of thousands in their late teens and early 20s into the tightly disciplined military.

These days, those NCOs have been asked to help trainees tackle many more challenges than rappelling down a tower.

One sign: the Smokey the Bear hats that mark drill instructors in the Army, Marine Corps and Air Force come off fairly regularly these days. That means it is time for talking, not giving orders or doling out punishment pushups.

Mentorship, with the campaign hats set aside, is a major theme for all the services. Navy instructors don’t wear the broad-brimmed hats, but they, too are putting a new emphasis on mentoring new sailors. That’s why the Navy this year added two weeks to its boot camp outside Waukegan, Illinois. Basic now takes 10 weeks — the first graduates are now in A-school and should begin arriving in Hampton Roads this summer.

Some of what drill instructors tackle are social issues that have been worrying the Pentagon’s top brass: sexual assault and harassment, racism and political extremism. In the wake of the Jan. 6. Capitol riot, Secretary of Defense Lloyd Austin ordered a worldwide stand-down to air concerns about racism and extremism. In December, the Pentagon issued new guidelines to root out extremism after finding about 100 service members were involved in extremist activity over the past year. 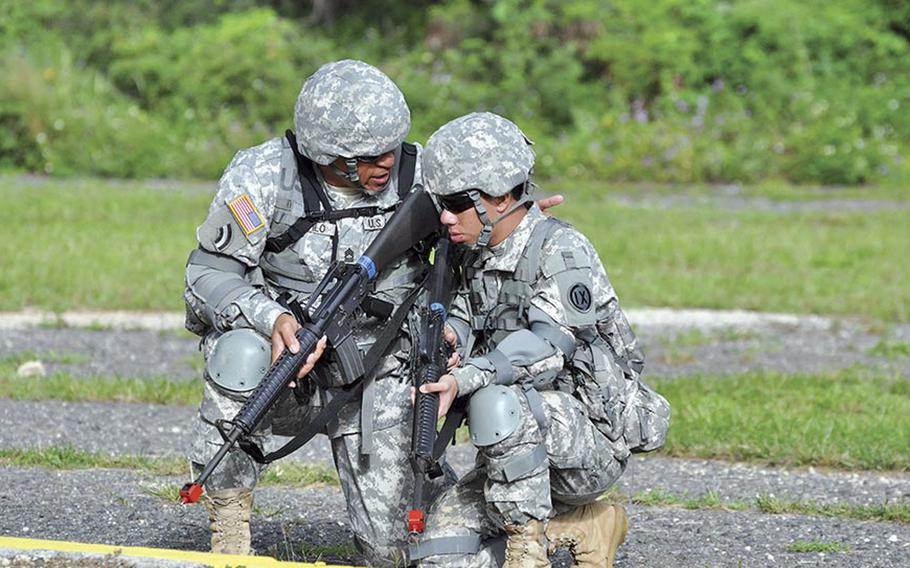 At Fort Jackson — one of the Army’s main basic training centers — Lt. Col. Larry Steward’s pilot program of naming “SASH influencers” (for student against sexual harassment) in each unit is expanding to cover all recruit platoons.

The idea is for recruits to listen for and intervene when early signs of harassment emerge: it is easier to hear a peer telling you a comment is out of line than to hear from a drill sergeant or company commander. And sometimes, an early intervention that doesn’t involve punishment can have a better effect.

The Army’s holistic health and fitness program’s five domains include a focus on values, which includes how soldiers are to treat each another and other people they encounter as they carry out their duties.

Thinking about how basic training launches that Army-wide push is part of what the Fort Eustis-based Center for Initial Military Training is working hard on these days, said Brig. Gen. John D. Kline, the center’s commanding general.

”If we get that right, not only do we have a high school graduate who is a values-oriented solider at the end of 10 weeks, but hopefully we have a long-term effect,” he said.

As it happens, the pandemic led Fort Jackson to make a major change to basic training. To the old “Red,” “White” and “Blue” phases that moved recruits through increasingly demanding drills, marksmanship and maneuver training, it added a new “Yellow” phase, right at the start.

The idea was to keep recruits in small groups while social distancing until a quarantine period passed.

Barracks are designed differently ― beds are spaced out in each bay, with 12 to 15 recruits sleeping head to toe. Their foot lockers are arranged to create a kind of personal space.

A series of classes on Army core values, first aid, military law and sexual harassment prevention are scheduled for this phase, instead of being spread through all 10 weeks of basic.

Instead of recruits from several bays taking classes together, as they used to, each bay conducts its own session — keeping in the smaller group based on housing builds a sense of being a team.

“We get them to know about each other, to recognize that they are stronger together,” said Brig. Gen. Patrick R. Michaelis, commander at Fort Jackson.

The values domain can be really emphasized then.

“We want to build spiritual resilience; not necessarily religious, but so they understand their own core values ... we want to layer the Army core values on that, so they can bring out their core values, so you can rely on them in adversity,” Michaelis said.

Pfc. Marcus Chavis, celebrating his graduation earlier this spring, felt he experienced that.

Yellow phase has another benefit: students don’t march around as much from class to class and drill session to drill session. That means less of a shock to the system as they work at getting in better physical condition; the payoff is fewer injuries.

The Navy actually adopted that housing unit-basic training a few years ago, although instead of barracks bays, those units are called ships. With that shift have come sessions based on real-world scenarios, life skills training and a focus on the Navy’s Warrior Toughness program, which combines performance psychology skills with character development.

The Navy’s extra two weeks of boot camp are all about mentorship. The idea is to set time for new sailors to talk with their instructors about situations they and their families will face once they are with the fleet, and to walk through various scenarios applying lessons from the “warrior toughness,” life skills and professional development curriculum from the previous eight weeks.

“Instructor feedback has been incredibly positive regarding additional time for mentorship and training,” said Lt. Michael Miller, public affairs officer at Great Lakes. “The additional time has allowed more opportunities for RDCs (recruit division commander, the Navy term for drill instructor) and instructors to provide an experienced view of what the fleet might look like as a new sailor.

The additional two weeks focus on scenario-based training about prevention and response for sexual assault and harassment, as well as extremism. Recruits are provided with real-life situations from the fleet, so they can work through the the issues as a group. At the end, they’ll learn what actually happened, and instructors emphasize problem-solving skills and the Navy’s core values.

The Navy adopted the extra time for mentorship from the Marine Corps’ move four years ago. During this “Phase 4″ time, Marine drill instructors provide time to talk freely and to walk through similar scenarios and discussion sessions.

“We talk about everything, what’s going on in the world, what our responsibilities are as Marines,” said Staff Sgt. Evelyn Esquinal, a senior drill instructor at Parris Island.

Col. Bradley Ward, commander of Parris Island’s Recruit Training Regiment, said Phase 4 is a chance to drive home some of the “core values” classes that are a central feature of the first weeks of boot camp,

“We’re really about teaching,” he said.

While the Marine Corps and Navy added time for mentorship to the end of basic training, the Air Force reincorporated an end-of-training mentorship period back into the basic training schedule. Last month, Air Force Chief of Staff Gen. Charles “CQ” Brown and Chief Master Sergeant of the Air Force JoAnne Bass asked leaders to routinely set aside “airmen time,” to focus on their airmen’s growth and forge closer bonds with them.

“I don’t believe we’re here to break down people, I’m not going to tolerate that,” said Col. Jeff Pixley, commander of the Air Force training center.

Every Friday, it’s his job to speak to the several hundred recruits who arrived four days earlier — they’ve been through haircuts, uniform and equipment handouts, first classes with their instructors, including such basics as how to stand properly at attention, and first sessions of drilling and marching in step.

“When I get up to speak to them, I’ll say I don’t care if come here with deeply held beliefs, but if you tell me you can’t work with someone because they’re a different gender or a different race or because they are transgender, and if that’s what you say — I say you can get on the bus back home,” he said.

Pixley said a lot of that message gets through from the way Air Force instructors do their job.

For Tech. Sgt. Joseph Van Doren, it’s about how you raise your voice. He still will yell, but if he needs to correct a student, it’s one on one, and his focus is on what needs fixing, and not any personal comment about the student.

“If you’re still having trouble marching in step then I’ll take you aside, say ‘just walk with me, just walk with me,’ and then maybe something like ‘hey cup your hand’ ‘cause I know that can help,” he said.

“The first 72 hours are shock and awe,” said Staff Sgt. Joshua Champion, at Fort Jackson. So there can be some yelling.

But it eases after that.

“If you’re stressed, you’re not listening,” he said.

“I’m about teaching them ... I want to get them thinking, I want to mold thinking. I don’t want them automatically charging in a frontal attack on a machine gun nest, I want them to be able to say, ‘That doesn’t sound so smart,’ ” Champion said.

“I’ll take my hat off and ask them what’s going on, how are they doing .... we had phone time and I saw a trainee sitting off by himself outside, so I ask ‘Why are you sitting there?’ and he said ‘I don’t have anybody to call, except maybe my teacher.’

“Maybe they yell at first, but as we move on, it’s not like that,” said private Chavis, speaking a few minutes after graduation at Fort Jackson.

“Say we’re learning about suppressing fire ... it’s like he’s saying you could have done it this way, you could do that,” Chavis said.

Gen. Kline, up at Fort Eustis, wants to see that across the Army’s basic training centers.

“If I do something wrong and that means I’m yelled at or doing more pushups, that’s something different than if you say to me you could have done that better,” he said. “If I’m private Kline and I screwed something up and I’m going to get yelled at, I’ll have one kind of reaction. If I’m private Kline and I hear I could have done better, I’m going to think I don’t want to let anyone down.”

For Sgt. Major Reggie Fox, back at Fort Jackson after a spell as a drill sergeant 15 years ago, basic training has changed a lot, and for the better.

“Now, we’re teachers. Before, we were disciplinarians. We still cared about our kids, but it was not the same ...

“When I was a drill sergeant ... (recruits) weren’t asking questions. I think it is good see them doing that now,” he said. “When I look back now, I remember how I could see on their faces that they were scared. I don’t like remembering that.”