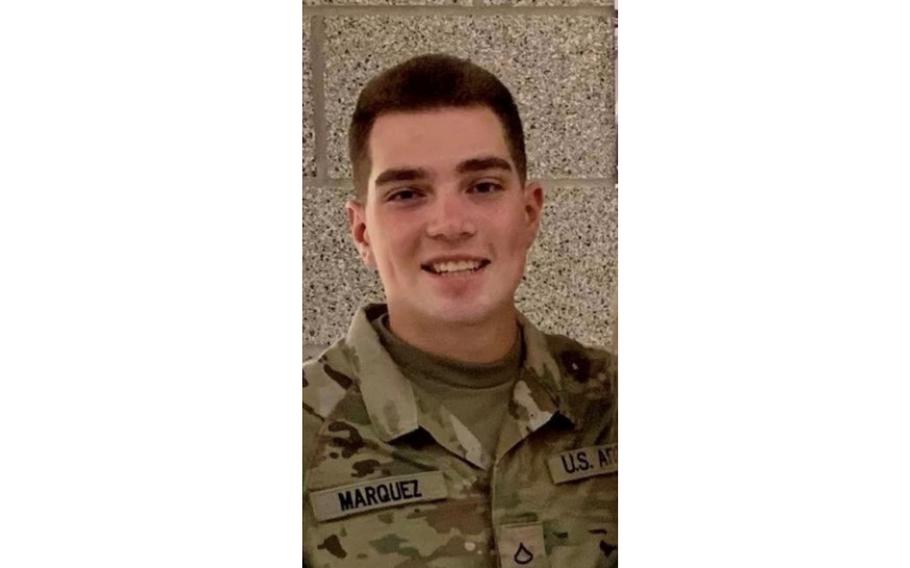 Pfc. Joseph A. Marquez of Dover, Del., was a member of the 8th Squadron, 1st Calvary, which is part of the 2-2 Stryker Brigade Combat Team of the 7th Infantry Division at Joint Base Lewis-McChord, Wash. (8th Squadron, 1st U.S. Cavalry/Facebook)

WASHINGTON — A 20-year-old soldier was killed and two others were injured after a single-vehicle crash Monday during a training exercise in Yakima, Wash., according to the Army.

Pfc. Joseph A. Marquez of Dover, Del., was taking part in a training exercise at Yakima Training Center when the incident occurred, according to the Army.

He was a member of the 8th Squadron, 1st Calvary, which is part of the 2-2 Stryker Brigade Combat Team of the 7th Infantry Division at Joint Base Lewis-McChord, Wash., near Tacoma. He joined the Army in 2021.

“Pfc. Marquez was known for his laughter and the light he spread everywhere he went,” the squadron posted Tuesday on Facebook. “We knew him as a loving son and brother to his family, a faithful friend to his comrades, and a loyal soldier to his nation.”

He was pronounced dead at the scene of the crash, the brigade said in the Facebook post.

Two other soldiers received minor injuries in the incident, which is under investigation, the Army said. They were taken to Yakima Memorial Hospital, where they were treated and released.

The Army did not release the injured soldiers’ names, citing privacy guidelines.

The 2-2 Stryker Brigade Combat Team had just participated in the 7th Infantry Division Best Warrior Competition held at the base on Friday, according to an Army video of the event.

Joint Base Lewis-McChord is a training and mobilization center, according to its website.

The Pentagon had placed some units from the base on heightened readiness orders in January to deploy to Eastern Europe as Russian President Vladimir Putin prepared his forces to invade Ukraine. However, they were not tapped to deploy.