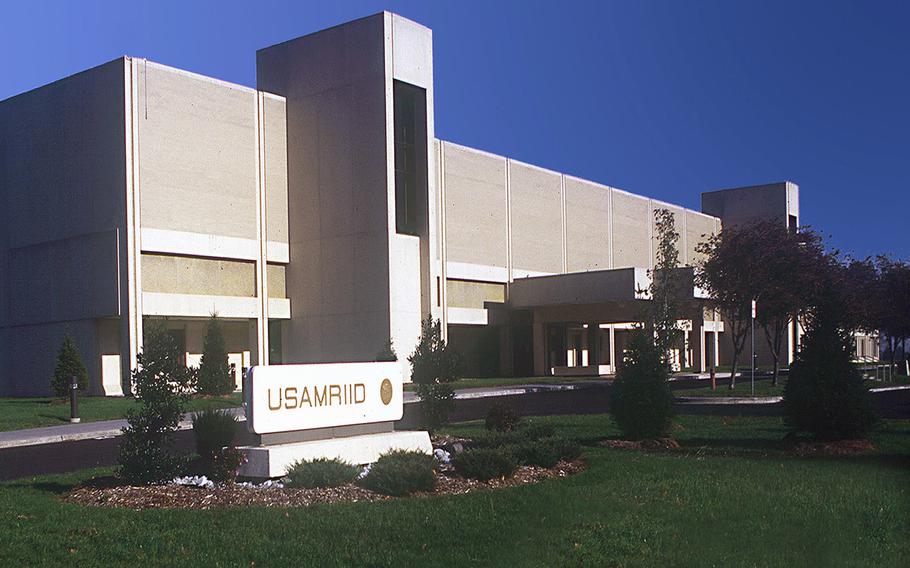 FREDERICK, Md. (Tribune News Service) — In 2018, the World Health Organization published a list of diseases that had the potential to cause a future pandemic.

It included SARS and MERS, two diseases caused by coronaviruses.

But when another disease caused by a coronavirus — COVID-19 — emerged a year after the list was released, nobody was ready for what would come. Not even USAMRIID, which helped develop and test the first vaccine approved by the U.S. Food and Drug Administration to prevent the deadly Ebola virus disease.

Next time, researchers say, things will be different.

At the Army's premier biology laboratory, headquartered at Fort Detrick in Frederick, scientists say they're taking lessons they've learned over the past two years and preparing to apply them to emerging infectious diseases that could cause future outbreaks.

On a recent morning, through a tiny window at the end of a long and narrow hallway in USAMRIID, Dye watched a researcher work in a Biosafety Level 4 laboratory — one of few that exist in the country.

Dressed in protective gear that resembled a spacesuit, she was testing new monoclonal antibodies scientists had developed against Crimean-Congo hemorrhagic fever, a highly deadly disease endemic in Africa, the Balkans, the Middle East and Asia. It also made the WHO's list in 2018.

When it came to responding to COVID-19, scientists at USAMRIID were building the plane as they were flying it, said Dye, who holds a doctorate in immunology.

In the early stages of the pandemic, when Dye would pull onto Fort Detrick, it seemed like every parking lot on the base was empty — except for the one in front of USAMRIID.

That one was full.

Keersten Ricks, a research microbiologist in the institute's Diagnostic Systems Division, remembers working from home for a few weeks at the start of the outbreak. But once it was established how her lab would fit into the institute's evolving mission, she returned.

"Life didn't stop," said Ricks, who has a doctorate in chemistry. "You went to work."

When the United States' first COVID-19 cases were confirmed in Seattle, samples of the virus were flown to USAMRIID, where scientists studied them.

Researchers also used the samples to grow a large "stock" of the virus, which they provided to academic and medical institutes around the world to ensure everyone was studying the same virus. They needed to do an "apples to apples" comparison of SARS-CoV-2, the virus that causes COVID-19, Dye said.

The institute was later involved with efforts in New York and Texas to study the efficacy of convalescent plasma treatments, Dye said. In those treatments, plasma would be taken from a person who survived a COVID-19 infection and given to someone recently infected with the virus to boost their chances at surviving it.

Ricks and other scientists at USAMRIID also helped develop diagnostic and testing tools specific to COVID-19. And researchers published papers on their use of animal models for studying COVID-19, which were picked up and applied by institutes all around the world, Dye said.

Then, when President Donald Trump launched Operation Warp Speed in May 2020 to accelerate the development of COVID-19 vaccines, therapeutics and diagnostics, the U.S. government tapped USAMRIID to be a part of the effort.

Scientists tested thousands of vaccines and treatments in a "blinded fashion," Dye said, meaning the government sent coded samples of the products to the institute's lab without indicating what company was behind each one.

There were originally eight vaccine candidates brought through Operation Warp Speed, Dye said. Though he can't say for sure because of the blinded nature of testing, Dye said he thinks most of the vaccine candidates came through USAMRIID at one point or another.

Dye said he is often asked how it was possible for scientists to develop a vaccine in only a year and a half when it usually takes 10 to 20 years. For one, he said, there was an immediate need for a vaccine. Money was also not an object.

"And it was successful," he said. "Thank goodness."

USAMRIID's response to the coronavirus pandemic and the 2014-2016 Ebola outbreak in West Africa was different in at least one major way: With Ebola, scientists had a head start.

Before 2014 there were so few laboratories researching Ebola it was considered an "orphan virus." But scientists at USAMRIID had been working on developing an Ebola vaccine since 2004. By the time of the outbreak, the vaccine had already been through multiple animal testing models, Dye said.

"If we would have started at ground zero for Ebola, it would have been much, much worse than what actually ended up happening in West Africa," he said.

USAMRIID later developed the laboratory diagnostic test used during the Ebola outbreak. The institute also performed the first comprehensive genomic analysis of Ebola virus sequences from Liberia, which helped researchers better understand how the virus moved between Guinea and Sierra Leone, according to information provided by USAMRIID.

And in the lab of Maj. Jeffrey Kugelman, chief of USAMRIID's Molecular Biology Division, scientists became the first to confirm that the Ebola virus could be sexually transmitted.

More recently, Kugelman and his team developed a testing approach that allows tens of thousands of samples to be tested at once for the virus that causes COVID-19. The approach, for which a patent is pending, according to USAMRIID, could save resources and scan large populations for the presence of the virus, Kugelman said.

Military communities all around the world are already sending samples to Kugelman's lab. His scientists have detected people who are infected with the virus, but who are asymptomatic or presymptomatic.

"These are your super-spreaders," said Kugelman, who has a doctorate in pathobiology. "These guys are really sick but show no symptoms. So, they're out hanging out, running in PT formation. They're some of the reasons why [spread of the virus] explodes the way it does."

Ricks' lab has had its own advances.

In early spring of 2020, the Defense Health Agency approached Ricks and her colleagues to monitor the prevalence of COVID-19 among service members. Every two months for more than a year, the scientists received 4,000 samples and tested them for the presence of virus antibodies.

Their results indicated a large group of service members had been exposed to the virus at some point over the course of the studied 14-month period, but didn't know it, Ricks said.

Ricks, Kugelman and their many colleagues have done amazing work over the past two years, Dye said. They were here every day, pulling long hours. He's proud of the way USAMRIID responded to the pandemic, he said.

"We just hope that as we move forward, the natural immunity that is gained by vaccination and being generally exposed to this virus is going to outweigh how quickly this virus could potentially mutate and become something different," he said.

Researchers didn't live in a vacuum at the start of the pandemic. They would go to work at USAMRIID, spend all day studying the virus and then come home to communities paralyzed with fear about the still unfamiliar threat.

It was all-encompassing, Dye said.

"Your day was COVID, your night was COVID, you're dreaming COVID," he said. "I mean, I'm not complaining about it. It's what we signed on for. We understand our jobs. But at the same time, now it would be nice to take a vacation."

Dye got that vacation last weekend, when he traveled to the Outer Banks, N.C., with his family. Things have finally slowed down at work, the USAMRIID researchers said. Kugelman noted that he can now go home on the weekends.

But it's been a busy couple of years. Scientists at the institute never stopped the work they were doing before the pandemic hit. They just added extra duties on top of it.

At the height of the pandemic, Dye said, scientists were spending about 80% of their time working with COVID-19 and about 20% on their prepandemic research. That ratio has since been inverted.

Dye acknowledged the mission of USAMRIID has evolved. The institute is still focused on biodefense and preparing for an intentional attack, but researchers understand that "anything in the environment is now within our mission," he said.

USAMRIID is still involved with coronavirus projects. The institute has been working with pharmaceutical companies AstraZeneca and Merck to assess "next generation" vaccines and therapeutics that researchers hope will protect people from coronaviruses other than just SARS-CoV-2.

The next time an unknown agent comes through their doors, Dye said, USAMRIID will have a formalized system in place to figure out what it is, and to develop vaccines and treatments against it — and then to start the whole process over again once the virus or bacteria mutates.

There might be a time in the future, similar to the Ebola outbreak, when USAMRIID is already working on a therapeutic or vaccine for a disease when it triggers a public health crisis, Dye said.

"That's a perfect scenario," Dye said. "But we just can't be caught totally without anything again."