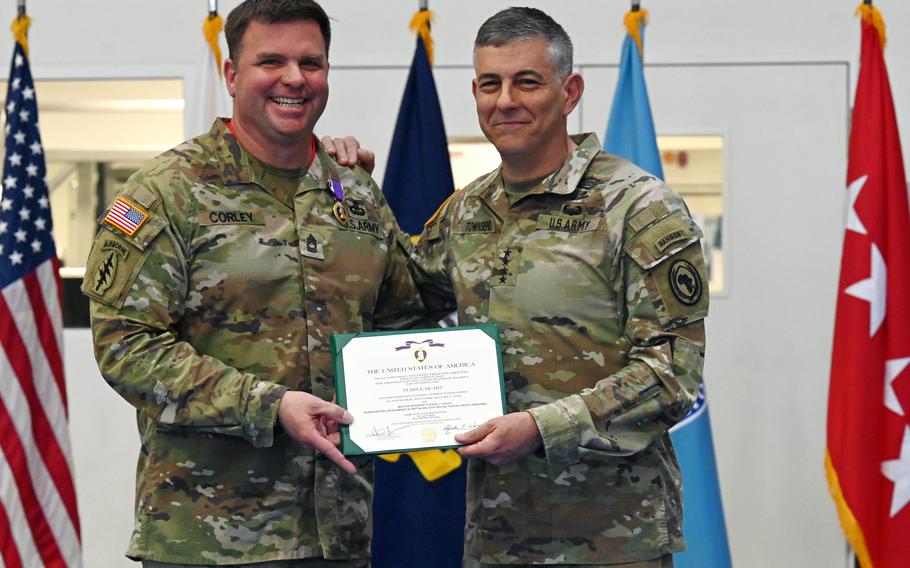 U.S. Africa Command Commander Gen. Stephen J. Townsend and Master Sgt. Steven Corley pose for a photo during a Purple Heart ceremony April 8, 2022, in Stuttgart, Germany. Corley was wounded during an attack while serving as the leader of a six-person team in northwest Africa. (Jasmonet Holmes/U.S. Air Force)

STUTTGART, Germany — A U.S. soldier serving in northwestern Africa was awarded the Purple Heart in recognition of his injuries during a January attack while he was leading a six-person team, U.S. Special Operations Command Africa said in a statement.

SOCAFRICA did not detail Corley’s mission or say where exactly he was operating when the injuries occurred.

However, in January, AFRICOM confirmed to Stars and Stripes that a U.S. service member had been injured when a French base in Mali came under mortar attack.

At the time, a small contingent of U.S. troops was in Mali to provide support for a French-led counterterrorism effort.

SOCAFRICA said Corley was responsible for “intelligence exploitation and integration with partners and allies,” adding that he had aided partner forces in locating the enemy’s position despite his wounds.

“Wherever you look in Africa, when it’s somewhere tough or dangerous, SOCAFRICA is there,” AFRICOM’s Gen. Steven Townsend said in a statement. “Sergeant Corley did what U.S. forces typically do when wounded: stay in the fight until they pass out or are instructed to stand down.”

Corley credited his military teammates and Landstuhl Regional Medical Center for his recovery.