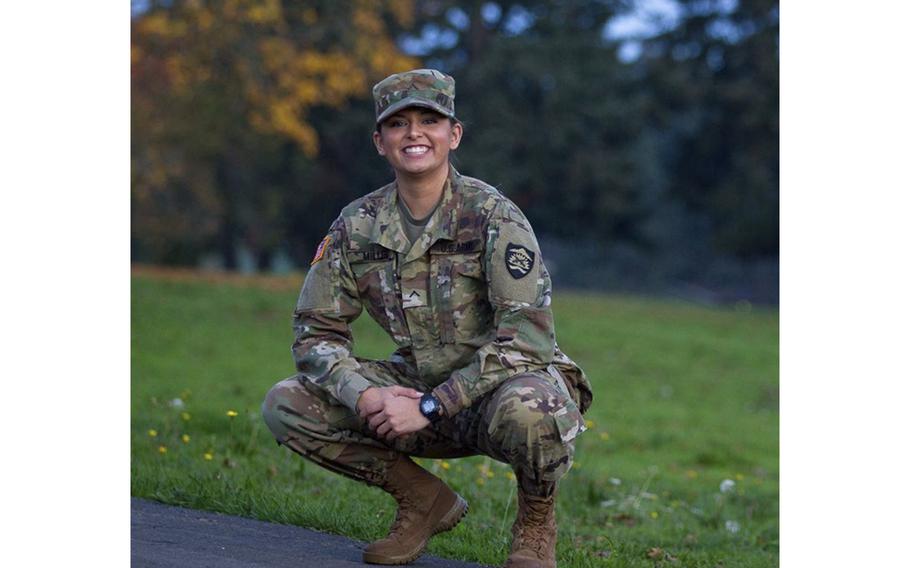 Oregon Army National Guard member Mikhenna Miller as seen in a November 2016 post. Miller will soon graduate from the University of Portland and is expected to commission as a second lieutenant in the Washington Army National Guard and start flight school to become a helicopter pilot. (hudl)

PORTLAND (Tribune News Service) — When she’s on a lacrosse field, Mikhenna Miller takes a pause from the strict, regimented part of her life and embraces the joy that comes with being part of a team.

It’s an environment Miller, 22, is hoping to soak up for a few more weeks with the University of Portland women’s lacrosse club team before graduation, commissioning as a second lieutenant in the Washington Army National Guard and starting flight school to become a helicopter pilot.

On top of being a college student in the University of Portland’s ROTC program and serving in the Oregon Army National Guard, Miller decided to join the school’s club women’s lacrosse team midway through her freshman year.

She’s been there ever since.

As a defensive midfielder and one of 11 seniors on the team, Miller and the Pilots (7-1) have experienced unprecedented success this season in the Northwest Women’s Lacrosse League, while being ranked No. 6 in the nation. This weekend, with a bid to nationals on the line, they carry the top seed into the four-team regional tournament held at Gonzaga.

The wins are nice, but as Miller and head coach Tom O’Connor say, they’re not what makes the Pilots a great team; it’s their energy and spirit, which Miller contributes to and has also benefitted from during her time in college.

“I don’t know how to explain it, they bring me out of my comfort zone,” Miller said. “(The) military side of me is very strict, very diligently professional. ... And we don’t have a lot of time for laughter, joking around, hanging out and dancing. Being on the field, it’s really refreshing to go back and be like, I’d say it’s not a childlike happiness, but it’s a very joyful team. They’re just joyful and it’s refreshing to be around.”

To understand how she transitions back and forth between the military and everything outside of it, including the team, Miller talks about “code switching.” It’s the concept of making the conscious note to talk, speak and conduct oneself differently depending on the context and surroundings of a situation. The same idea applies between military and civilian life.

“It’s basically just a conscious choice of taking a step back and being like, this isn’t the military,” Miller said. “I can be Mikhenna from before and just hang out and have fun. Then when I’m stepping into that, when I put on the uniform, my mind goes to that.”

Unlike the ROTC and national guard, however, Miller doesn’t have a formal leadership position with the lacrosse team. O’Connor, a Division Chief with the Vancouver Fire Department, sees why it makes sense.

“(She’s) in all these leadership positions in the military, but when you come on the team ... it’s Kenna. I’m Chief O’Connor all day, (then) I get to be coach Tom,” O’Connor said.

“If Kenna was team captain, there would be a whole different kind of pressure. But she’s leadership all the time, all day and then she comes on to the team. I think that’s a different choice. ... But it’s there. Players have a lot of respect for Kenna.”

Miller was fascinated with the idea of being in the military from a young age, talking about playing toy soldiers in the backyard, or watching army commercials on TV, remembers her mom, Christina Miller.

“It scared her for a really long time,” Mikhenna Miller said. “She was like, ‘My little daughter, my youngest child is going to go in the military and she wants to do all these crazy things.’ And then she’d be like, ‘Oh yeah, totally, you’re going to do that,’ and then she’d just change the conversation because she didn’t like the idea of it. What parent does?”

Shortly before her 17th birthday, she began talking to a recruiter about going to train for a day with the Oregon National Guard, an opportunity offered to high school students.

Miller still remembers the day, April 23, when she did an obstacle course, played paintball, hung out with the unit and learned a lot about what being a soldier entails.

Then came May 24, the day she enlisted.

On June 3, she left for basic combat training, and the following summer completed advanced individual training.

“It was a very fast turnaround,” Miller said. “It all happened very fast.”

Because she came into University of Portland with prior service, Miller was able to join the Simultaneous Membership Program, which allows current enlisted privates or soldiers to participate in the Oregon National Guard and ROTC program.

In the guard, Miller has served as military police, responded to wildfires, even some riots in Portland.

Additionally, Miller observed a Medevac training with a unit at Camp Rilea in Warrenton, Ore. While there, Miller said she “fell in love with the lifestyle and the community of what they’re doing.”

She decided she wanted to become a helicopter pilot, and was subsequently selected for flight school at Fort Rucker, Ala. She’ll eventually be stationed at Fairchild Air Force Base in Spokane.

Being a pilot checks all the boxes of why she joined the military, notably service to others and giving back to her country after her family gained citizenship, starting with her grandparents, first-generation immigrants from Mexico.

She also wanted a job that would keep her mind working and constantly challenge her. When she put all the pieces together, flying made the most sense.

Plus, Miller will be one of a small number of female pilots in the military, and an even smaller number who are women of color.

“I wanted to be a part of that group, leading the way for them,” she said.

“I think it’s badass to be (in the) military,” Miller said with a laugh. “That’s just me.”

If all goes according to plan for the Pilots this weekend at Gonzaga to qualify for nationals, Miller will add another date to her calendar after commissioning on April 30 and graduating from UP the following day. The team would then board a plane bound for Austin, Texas on May 3. Miller has already confirmed she can go.

That was good news to O’Connor, who knows Miller’s combination of physical ability, mental toughness and lacrosse IQ is a rare combination the team needs in the defensive midfield, along with teammate Andie Whitlow, a senior from Yamhill, Oregon.

“If they’re both on the field, even better. But I don’t really want to go to Texas without those two,” the coach said.

Miller’s mom asked if she should make invitations for her graduation party. Miller told mom to hold off for now.

“I’m really confident we’re going to go,” Miller said. “You have to be confident.”

But Miller doesn’t want to look too far ahead just yet. At the beginning of the semester, she told herself to slow down, live in the moment and enjoy the time left to have fun with friends and her team. She also recently started coaching 10 and 11 year olds in Camas youth lacrosse, another experience that the 22-year-old college senior values.

“You might think, ‘Oh, that’s another thing on her schedule,’ but that thing is really important to me because it’s giving me time to slow down and reevaluate my own self,” Miller said.

“Making the time to do those things is really my goal for the next month,” Miller said. “It’s just slow down, make the note do things that bring me joy.”

Visit The Columbian at www.columbian.com