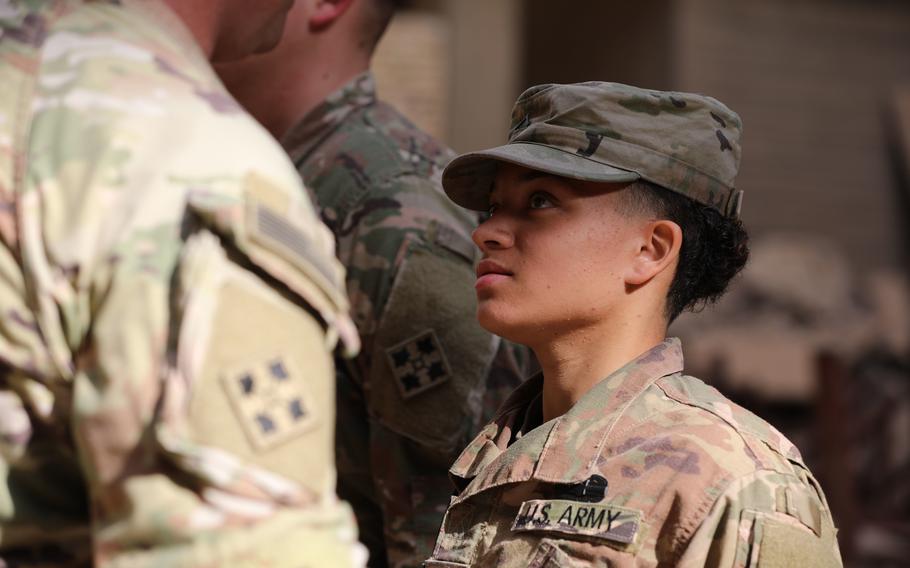 Lt. Col. Gregory Polk, the 299th Bridge Engineer Battalion commander, speaks to a soldier after pinning on the Combat Action Badge during a ceremony at Union III forward operating base in Baghdad, March 24, 2022. The soldiers were awarded for their response to an enemy attack that occurred days after the U.S.-led coalition transitioned to an advisory mission late last year. (Bree-Ann Ramos-Clifton/U.S. Army)

American soldiers in Iraq were awarded the Combat Action Badge for their response to an enemy attack that occurred days after the U.S.-led coalition transitioned from a combat mission to a strictly advisory and support role late last year.

Several members of the Army’s Task Force Pioneer were recognized recently for their actions the night of Dec. 19, 2021, when rockets targeted the coalition’s facility in Baghdad’s Green Zone, known as Union III.

In a ceremony at Union III on March 24, Lt. Col. Gregory Polk of the Fort Carson, Colo.-based 299th Brigade Engineer Battalion pinned the decorations on members of his own battalion and the 4th Battalion, 9th Infantry Regiment. Both are part of the 1st Stryker Brigade Combat Team, 4th Infantry Division.

“The soldiers either responded directly to the threat or were within the radius of the kinetic effects of the munitions,” said Lt. Col. Gina “Flash” McKeen, a coalition spokesperson, in an email last week. 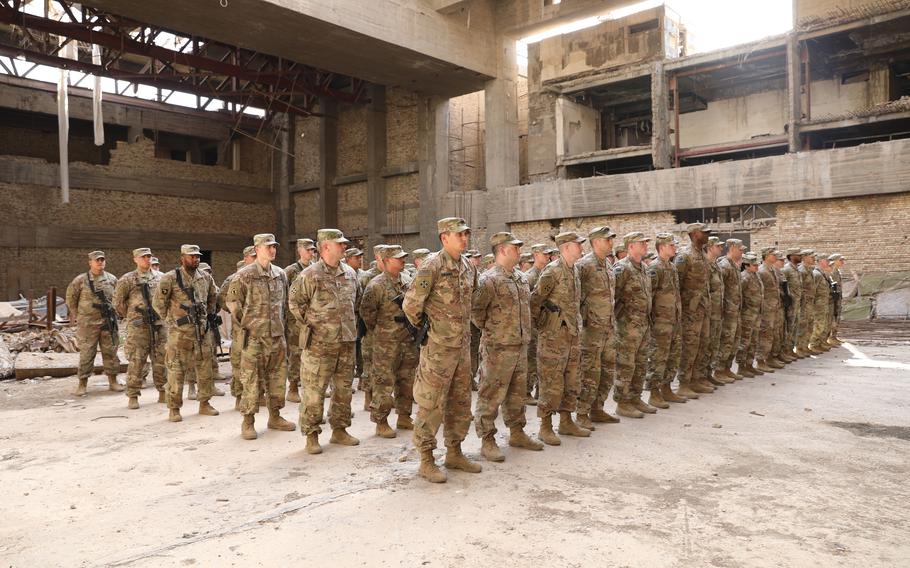 U.S. soldiers from the 299th Bridge Engineer Battalion and 4th Battalion, 9th Infantry, stand in formation during their Combat Action Badge Award ceremony in Baghdad, March 24, 2022. Several members of the Armys Task Force Pioneer were recognized for their actions the night of Dec. 19, 2021, when rockets targeted the coalitions facility in Baghdads Green Zone, known as Union III. (Bree-Ann Ramos-Clifton/U.S. Army)

Two Katyusha rockets were launched at the compound near the U.S. Embassy in Baghdad, but caused no deaths or injuries, officials said in December. One was shot down by a C-RAM defensive battery, and one struck north of the coalition compound, damaging two civilian vehicles.

The CAB recognizes non-infantry soldiers who personally take offensive or defensive action while under hostile fire, and is intended to recognize the “greatly expanded role” those soldiers have in active ground combat, Army regulations say.

The coalition did not respond to a query last week about how many troops earned CABs for the December attack, but Army photos released online show dozens of recipients at the March ceremony. 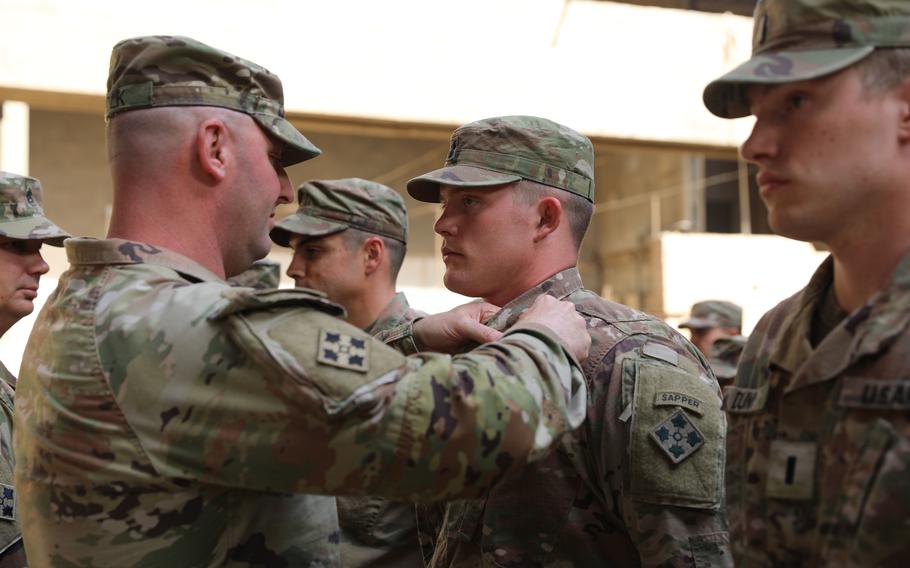 Lt. Col. Gregory Polk, the 299th Bridge Engineer Battalion commander, pins the Combat Action Badge on to a soldier's uniform during a ceremony at the coalition base Union III in Baghdad, March 24, 2022. Members of from the 299th Bridge Engineer Battalion and 4th Battalion, 9th Infantry, received the award for their response to an enemy attack on the installation. (Bree-Ann Ramos-Clifton/U.S. Army) 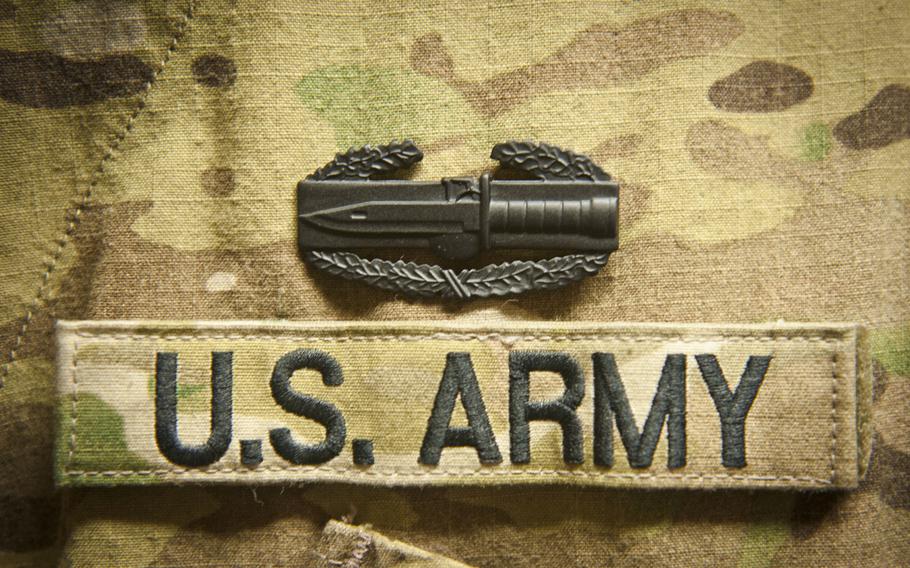 The Combat Action Badge is awarded to non-infantry soldiers who personally take offensive or defensive action while under hostile fire, and is intended to recognize the greatly expanded role those soldiers have in active ground combat, Army regulations say. (Ken Scar/U.S. Army)

Militia groups aligned with Iran have been blamed for dozens of rocket and “suicide drone” attacks, some of them deadly, launched against facilities housing Americans in Iraq in recent years.

They’re part of an effort to drive the U.S. from the region and pay back a 2020 U.S. drone strike that killed Iranian general Qassem Soleimani in Baghdad.

The persistent threat of militia attacks “drove the heightened security readiness posture and focused a considerable number of resources on the counter-UAV and counter-rocket, -artillery, and -mortar systems,” or C-RAMs, at the State Department’s Baghdad Diplomatic Security Compound, a government watchdog agency found.

The State Department planned to build hard covers for its diplomatic support hospital, dining facility and a secure fuel facility, the Lead Inspector General for the U.S.-led coalition said in a report released in February.

Militant groups conditioned the end of the attacks on the U.S. troops’ exit from Iraq.

Last July, President Joe Biden promised that combat troops would be withdrawn by the end of the year, and the coalition had announced the end of its combat mission in keeping with that pledge just days before the rockets fell on Union III last December.

But some 2,500 U.S. troops were to remain to help develop Iraq’s security forces and support their fight against remnants of the Islamic State group. Sporadic rocket and drone attacks continued into this year.

“Although the mission has changed, we retain the inherent right to self-defense in protecting coalition and Iraqi forces,” McKeen said this week.