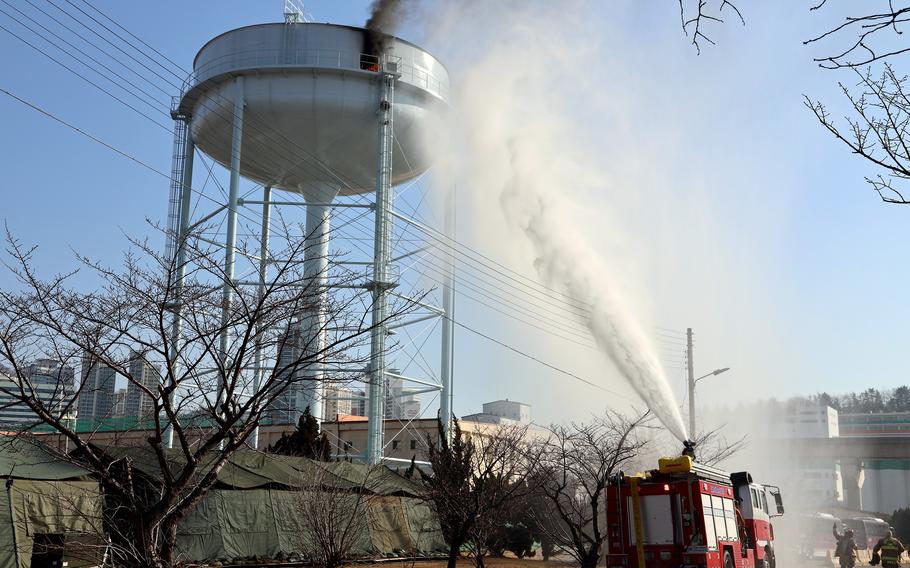 The collision occurred around 9:14 a.m. Thursday at the Busan Storage Center, small installation in the southern coastal city, a spokesman said under the customary condition of anonymity.

Sgt. 1st Class Adam Ross, spokesman for the 19th Expeditionary Sustainment Command, confirmed the incident to Stars and Stripes by phone Friday and said no injuries were reported. Damage to the water tower is cosmetic, he added.

Local fire crews extinguished the flames in 20 minutes, a Busan Fire Department official told Stars and Stripes by phone Friday. He said “sparks were flying up” when first responders arrived.

U.S. and South Korean military personnel work together at the storage center.

The South Korean military spokesman said the drone was operated using a hydrogen fuel cell. It appeared to be a small, multirotor variant, based on images taken at the scene Thursday by a soldier with the sustainment command that were shared with Stars and Stripes.

The South Korean military is conducting an investigation into the collision, the spokesman said.

The 19th Expeditionary Sustainment Command is headquartered in Daegu and includes around 5,600 personnel. Its duties are to provide support for 8th Army on the Korean Peninsula.