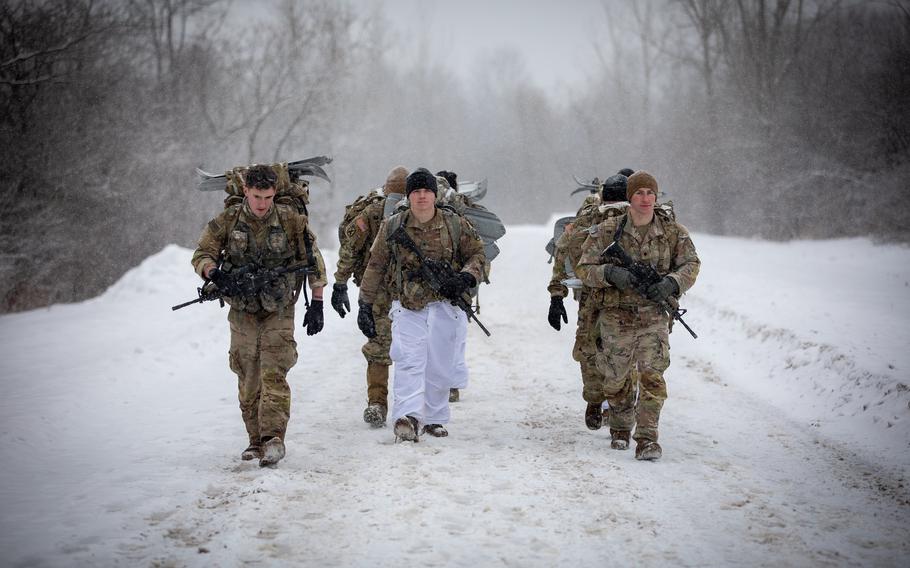 FORT DRUM (Tribune News Service) — A winter storm Friday prevented Gov. Kathleen C. Hochul from personally addressing about 200 10th Mountain Division soldiers preparing to deploy to Europe in the wake of a Russian military buildup along the Ukrainian border, but the governor was able to thank the soldiers for their service via teleconference.

Gov. Hochul told the soldiers that what they are doing — leaving their families and friends on short notice — is an extraordinary example of patriotism.

“There is something so powerful knowing that you are willing to drop everything and respond to that call when the country needs you,” she said.

Maj. Gen. Milford H. Beagle Jr., 10th Mountain Division (LI) and Fort Drum commander, told the gathered soldiers that the governor had really wanted to be on base in person to express her appreciation.

“This was important to her, and it always means a lot when they can see the soldiers and family members and personally talk with them,” Maj. Gen. Beagle said.

The governor said she was “grateful and humbled” to have the opportunity to speak with the deploying soldiers.

“We will pray for your safe return, and know that your families are well taken care of. You are all part of a great family at Fort Drum,” she said.

The 10th Mountain Division, a light infantry division, was the most-deployed Army unit during the Afghanistan and Iraq wars. Maj. Gen. Beagle said this most recent deployment was the second time in the past several months that a Fort Drum unit was called upon to rapidly deploy.

“The nation is never going to ask us if we’re ready. They’re going to expect it,” he said. “No notice, and you’re ready to go. That is the epitome of what we are about and what we do here.”

Separately, Rep. Elise M. Stefanik, R-Schuylerville, said in an interview with the Times the soldiers are being deployed to support NATO allies in Europe, potentially Poland, Germany and Romania, and “as we continue to see Russia trying to insert itself on the eastern European border and specifically when it comes to potential incursions in Ukraine, it’s important that we stand by European allies.”

“This is not boots-on-the-ground in Ukraine. To be very specific, this is our NATO ally. I support providing munitions and providing that type of financial support to the Ukrainians. And we should have never gotten this far into this,” Rep. Stefanik said.

The Congresswoman said she believes that part of the reason a response to Russia’s aggression is needed is because President Joseph R. Biden “has given (Russian President Vladimir) Putin whatever he’s wanted.”

“He greenlighted the Nord Stream 2 pipeline. He has allowed Putin to attack this country when it came to cyber attacks. And now we are seeing the result of this weak foreign policy as Putin senses weakness and is very menacing and threatening on the Ukrainian border,” Rep. Stefanik said.

The Congresswoman stressed that the Fort Drum deployment should not be interpreted as the United States sending troops to Ukraine.

“This is troops to Europe, which happens frequently when it comes to our 10th Mountain Division soldiers in terms of their rotations and where they served before,” Stefanik said. “So, I support that and I support the soldiers and we support their family members for whatever they need.”