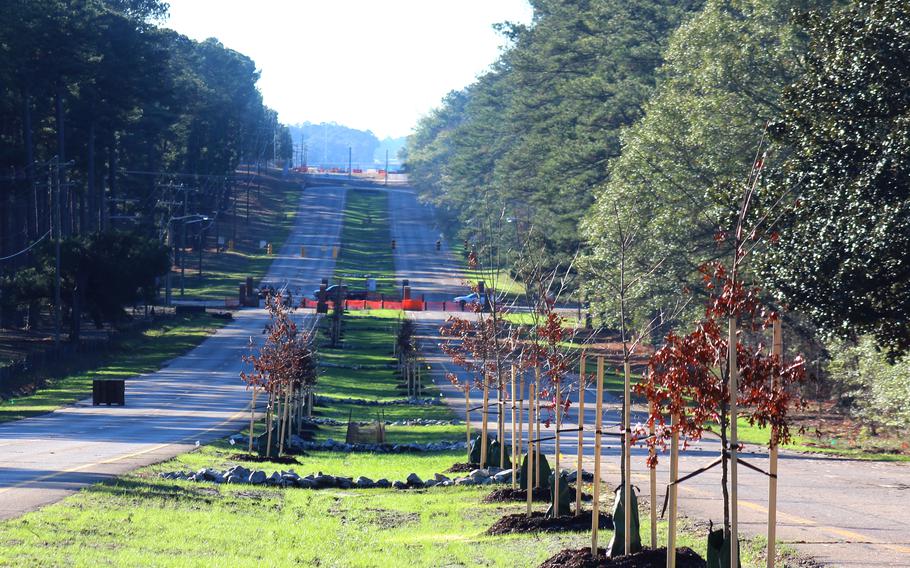 Trees have been planted in the old Fort Bragg median as part of the new Liberty Park, on Jan 4. (Brian Bird/U.S. Army)

FORT BRAGG, N.C. (Tribune News Service) — What Fort Bragg leaders described as an eyesore for several years is transformed into a space for physical and mental health to benefit soldiers, families, veterans and guests.

It is located in an area near Bragg Boulevard and Howell Street that was closed off to traffic in August 2016 as road crews worked to widen N.C. 210 and Murchison Road along with the construction of Interstate 295.

"Today is about turning a blemish into a real piece of beauty," Col. Scott Pence, Fort Bragg's garrison commander, said during a Jan. 19 ribbon cutting.

Pence said as the I-295 Outer Loop project completed near Fort Bragg in 2018, the abandoned area of Bragg Boulevard that is on post became "unneeded and unwanted as nature took back the area."

Fort Bragg's Directorate of Public Works and chief architect team decided to invest in the area with new trees as part of an effort to beautify east Fort Bragg, Pence said.

The area features 3.5 miles of paved trails near military housing and other facilities, and connects to the 14-mile Liberty Trail that goes past the Iron Mike statue, 18th Airborne Corps headquarters and 82nd Airborne Museum.

According to a news release, more than 450 new trees and wildflower groves are in the area that includes 2.8 miles of unpaved trails that move through pine forests and indigenous meadows and more than 14 acres of maintained grass and 52 acres of stabilizing wildflowers and other grasses.

The park also has 25 physical fitness stations and four family pavilions, and there are plans to convert two decommissioned churches into community centers.

It is for soldiers, families, Department of Army civilians, retirees and guests to enjoy, Pence said.

Maj. Gen. Brian Mennes, deputy commanding general of the 18th Airborne Corps, said it is a site for peace, tranquility and wellness.

Pence said it is "critical" for the mental health of soldiers and families.

"We have higher than average suicide rates," Pence said. "We have stressors from the coronavirus. We have a lot of things going on in people's lives."

He said changing blemishes to a "point of beauty" that can change mental health and enhance quality of life is an effort that is "worth it."

The name Liberty Park comes in part to honor American soldiers, airmen and allies who liberated France in 1944, leaving a trail from Omaha Beach to Bastogne, and placing markers at major points that later became known at Liberty Trail.

As community leaders, pastors and tribal leaders have weighed in on the Fort Bragg renaming process mandated by Congress in 2021, Pence said retired Gen. Dan McNeill, who has organized community representatives, suggested that the installation could be named after an idea like "liberty."

"He also knew from his experience being a former commander and leader here on Fort Bragg that liberty had the potential to unite all the ties on Fort Bragg," Pence said.

It is used in the Special Forces Latin motto "de oppresso liber" and is heard in the first stanza of the 82nd Airborne Division's “The All-American Soldier” song that says, "'We're all-American and proud to be, for we are the soldiers of liberty," Pence said.

"This walking, jogging fitness trail not only enhances quality of life for our soldiers and families and guests, but the name of it is part of our past and is part of our present and our possible future," Pence said.