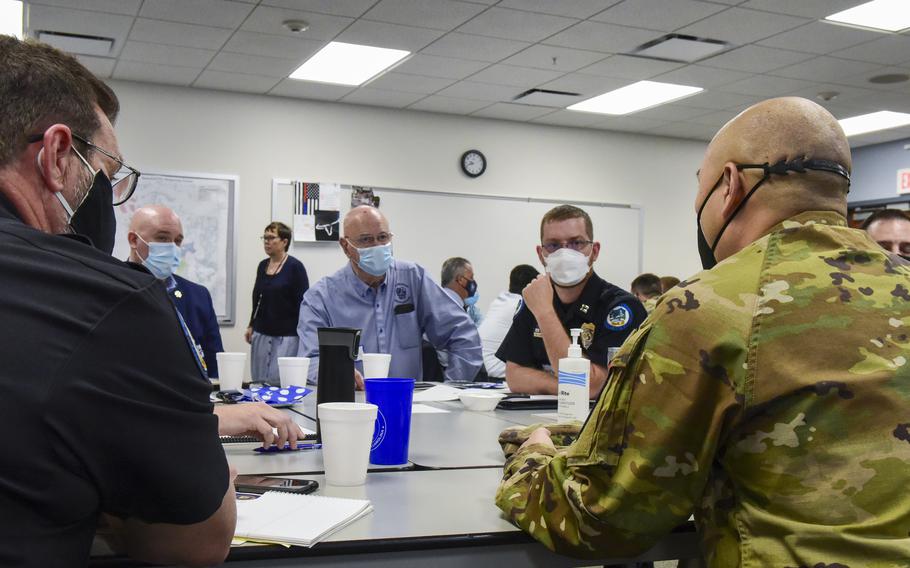 U.S. Army National Guard Soldiers with the 125th Cyber Protection Battalion, South Carolina National Guard, work with the city of Beaufort and other regional organizations as they conduct their first ever cybersecurity exercise March 24, 2021, at the Beaufort Police Department training facility in Beaufort, S.C. The guard’s multimillion-dollar Readiness Center, DreamPort and associated facilities, to be built on the USC Aiken campus, “will be a portal into the entire cyber enterprise of South Carolina,” Maj. Gen. Brad Owens said in Statehouse testimony Wednesday. (Flonasia Neals/S.C. National Guard)

AIKEN, S.C. (Tribune News Service) — A cutting-edge complex the South Carolina National Guard hopes to erect in Aiken County could prove to be the state's cybersecurity locus, with military officials and lawmakers recently underlining just how important the pursuit is.

The guard's multimillion-dollar Readiness Center, DreamPort and associated facilities, to be built on the USC Aiken campus, "will be a portal into the entire cyber enterprise of South Carolina," Maj. Gen. Brad Owens said in Statehouse testimony Wednesday.

A relationship with Battelle Savannah River Alliance, the Savannah River National Laboratory management team, will be leveraged, Owens suggested, as will connections with technical colleges and other players.

BSRA is led by Battelle and includes, on this side of the river, South Carolina, S.C. State and Clemson universities. The lab, itself, has a burgeoning cyber portfolio.

The guard's compound would sit on 18 acres at USCA, documents published by a state panel show. The land would be leased for 50 years, with automatic 20-year renewals after that.

The Readiness Center, some 43,000 square-feet, would support training and logistics for two S.C. National Guard units. The DreamPort — similar to the Georgia Cyber Center in Augusta — would be home to classrooms, testing and training spaces, and a secure area, where more clandestine operations could take place. The DreamPort would cover 25,000 square feet.

Construction of the DreamPort has been teased for 2024. Before that, the target was 2022. A memorandum of understanding was signed around this time last year.

Owens in a previous interview described Aiken County as a soon-to-be cyber hotbed: "You're bringing world-class talent together in a collaborative way that nobody else can compete with," the general said in October 2021. "It's all going to converge right here."

USCA has established itself as a cyber force, most recently partnering with a premier cybersecurity institute to expand educational offerings. And the university is about 40 minutes away from Fort Gordon, the Army's cyber center of excellence, providing it what local officials call "the power of proximity."

USCA Chancellor Dr. Daniel Heimmermann in a Wednesday statement said the university "continues to value our partnership with the South Carolina National Guard and looks forward to having the Cybersecurity DreamPort and Readiness Center on campus." The project complements a range of university efforts, he added, including "the Department of Energy's $50 million Advanced Manufacturing Collaborative, also to be built on USC Aiken's campus."

In response to remarks made by Owens, state Rep. Murrell Smith said cybersecurity "is a big issue. It is what we're seeing a lot of universities and technical colleges, and even some high schools, are trying to start training people, which we need." The Sumter Republican urged Owens to think holistically and include the entire Palmetto State, "because whatever corner of the state I go to, I hear people talking about that."

South Carolina Gov. Henry McMaster in February 2021 kicked off in-depth review of the state's cyber capabilities and climate. Later, the governor spoke at a virtual U.S. Chamber of Commerce conference and told attendees the Palmetto State was primed for cybersecurity investments.

"I think," he said at the time, "South Carolina is positioned to be enormously competitive."

McMaster last month recommended $9.8 million of the state's Savannah River Site plutonium money be applied to the DreamPort project. He further suggested $15 million be spent to bolster cyber infrastructure in North Augusta, a suburb of Fort Gordon, according to its mayor.