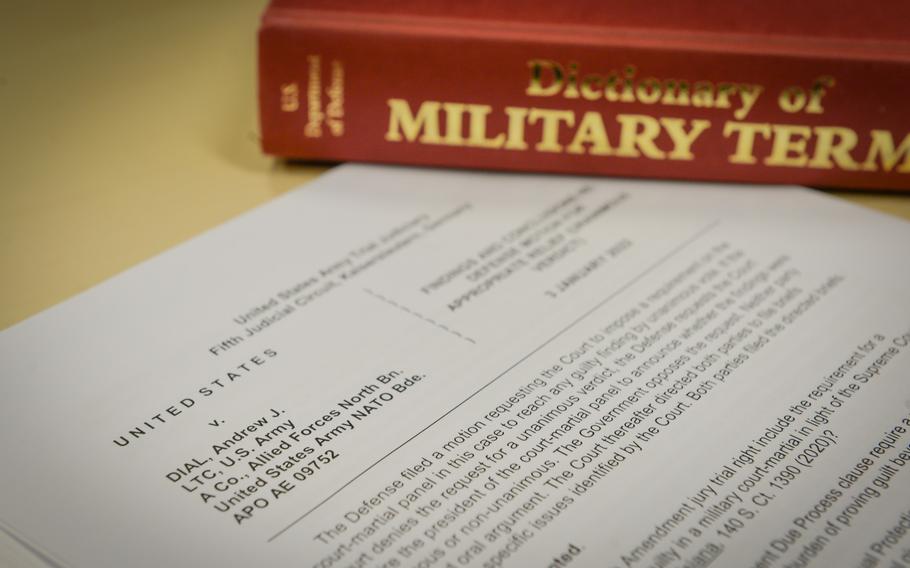 Buy Photo
An Army judge in Germany said this week that a lieutenant colonel facing sexual assault charges will require a unanimous guilty verdict in order to be convicted in his upcoming court-martial. (Alexander Riedel/Stars and Stripes)

STUTTGART, Germany — A U.S. Army officer facing sexual assault charges will require a unanimous guilty verdict to be convicted in an upcoming court-martial, a judge ruled this week ahead of a potentially groundbreaking case.

Col. Charles Pritchard, an Army judge in Kaiserslautern, Germany, said allowing a nonunanimous guilty verdict in the trial of Lt. Col. Andrew Dial would violate due process by denying him the same rights that civilian defendants enjoy.

In a pretrial decision Monday, Pritchard wrote that he will therefore instruct the military panel judging Dial that “any finding of guilty must be by unanimous vote.”

The ruling came in response to a motion by attorneys for Dial, a member of Allied Forces North Battalion, based in Belgium. Dial is charged with three counts of sexual assault.

Details about the allegations were not included in the ruling or in an Army court docket. A court martial, however, is set for Monday in Kaiserslautern.

A factor in Pritchard’s decision was an April 2020 U.S. Supreme Court ruling that banned nonunanimous verdicts in state criminal cases. Oregon was the last state to allow split jury verdicts.

The court’s 6-3 decision in Ramos v. Louisiana said state courts are also bound by the longstanding requirement in federal courts that all jurors must be in agreement for a defendant to be convicted. Army Lt. Col. Andrew Dial is facing sexual assault charges in a court-martial in Kaiserlautern, Germany, that is due to start Monday. An Army judge ruled this week that a nonunanimous guilty verdict will not be sufficient for conviction in the case. (LinkedIn)

But the Supreme Court decision made no mention of the applicable standard in military courts. One reason for that is courts have repeatedly found that the Constitution gives Congress power to “make rules for the government and regulation of the land and naval forces.”

Those rulings treated the military justice system as a congressional matter, so courts previously held that some protections for civilian defendants don’t apply to service members. However, Ramos v. Louisiana has created a churn in the military legal community.

“This is a very big decision for LTC Dial, certainly, and may pave the way for other similar rulings, but it has no mandatory precedential value until taken up by the appellate courts,” said Patrick Hughes, a former Air Force prosecutor now with the Patriots Law Group in Washington.

Hughes said that since Ramos v. Louisiana, military defense lawyers have been filing motions like the one in the Dial case, with the aim of having the issue taken to the Court of Appeals for the Armed Forces or the U.S. Supreme Court.

However, what is unique in the Dial case is that a trial judge acted on his own, Hughes said.

“I am not aware of any other similar trial-level rulings,” he said.

Under the Uniform Code of Military Justice, nonunanimous panel verdicts have long been permitted, although the guidelines have been tweaked over the years.

Currently, a three-fourths concurrence of court-martial panel members is required to convict and sentence a defendant in a trial with members. A sentence of death requires the unanimous conviction by a panel, however.

Pritchard concurred with the defense’s contention that under the Fifth Amendment there is “no rational basis for Congress’ different treatment of U.S. service members and civilians” regarding the requirement of unanimity of a jury for conviction.

Pritchard also explained in his ruling that Congress over the years has consistently narrowed the gap between the military and civilian legal system, bringing the former more in line with the latter. By allowing nonunanimous verdicts, Congress has encroached on Fifth Amendment due process rights, he said.

The use of split verdicts in courts-martial “simply slipped into congressional legislation pertaining to military justice,” Pritchard argued.

The practice dates to the original Articles of War, which were adopted from the British and kept on when the Uniform Code of Military Justice came into effect in 1950.