by
Marcus Kloeckner and Chad Garland
• Stars and Stripes • December 28, 2021 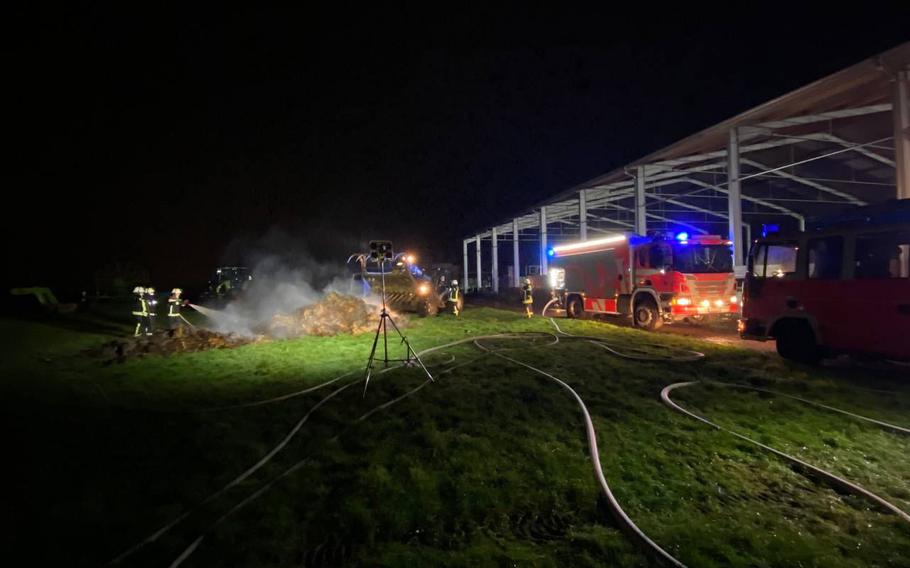 A blaze in a manure pile the size of an Olympic swimming pool was extinguished Tuesday in Wiesbaden, Germany, with help from a U.S. Army fire crew.

The fire broke out about 5 a.m. at an agricultural company’s depot in Delkenheim, a part of Wiesbaden, said Fabian Kiefer at the city fire station headquarters. The burning dung heap measured 2,750 cubic yards. 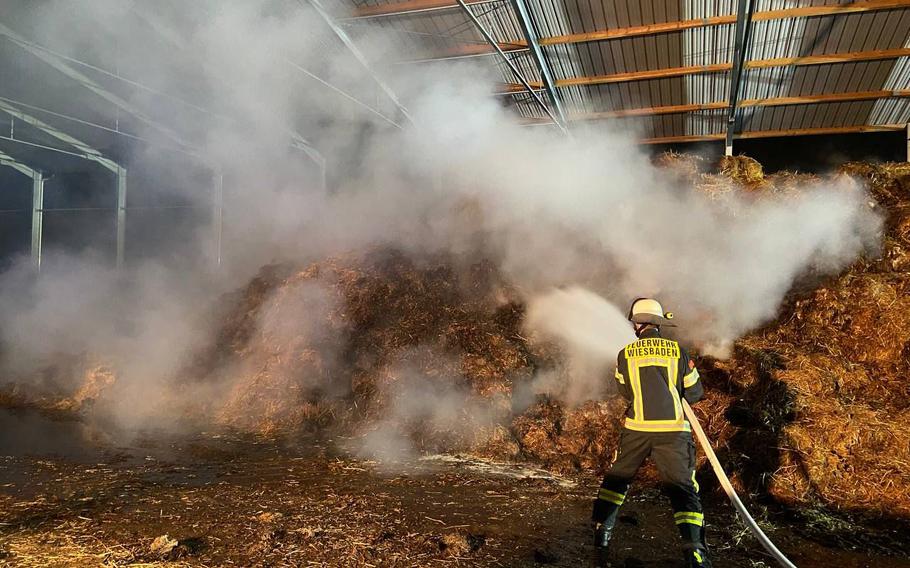 Kiefer did not have a damage estimate. The fire did not appear to have been set intentionally and was likely caused by the pile’s own heat, a Wiesbaden police spokesman said.

The military sent a special truck usually used on fires at airfields because of its large-capacity water tank, the fire station said. The truck was “very helpful at the beginning,” as up to 45 firefighters battled the blaze at its peak, fire officials said. 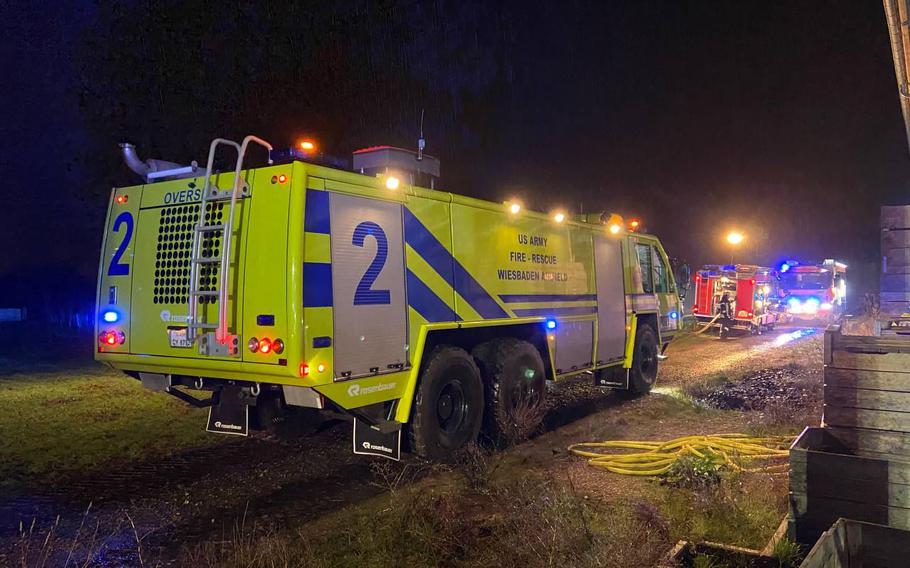 A U.S. Army firetruck at the scene of a fire in Delkenheim, Germany, early Tuesday, Dec. 28, 2021. About 2,750 cubic yards of dung at an agricultural facility caught on fire. A police spokesman said the manure pile’s own heat likely was the cause. (Wiesbaden Fire Department)

The scene was near the military airfield at Clay Kaserne and the American crew arrived quickly, Kiefer said.

U.S. and local German fire crews train together frequently, Kiefer said. The fire station has a good idea of what equipment the military operates and what to request, though the base is not required to send it.

Hours later, the Wiesbaden fire brigade was still pulling apart the huge pile of dung to make it easier to extinguish, but Kiefer said the fire was under control, and only a few firefighters remained by the afternoon. 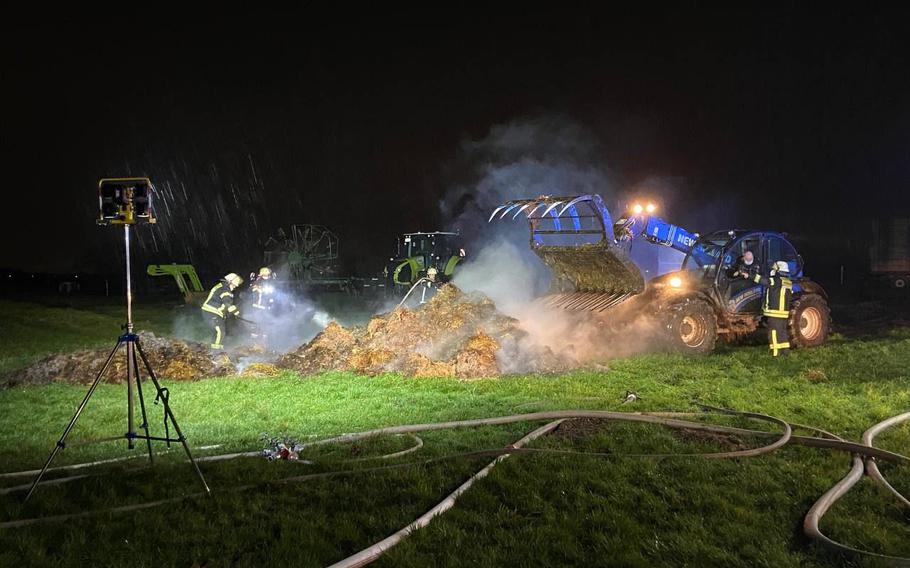 The Wiesbaden garrison did not immediately respond to phone calls and emails about the blaze.

The fire department at Clay Kaserne is staffed by some Germans, such as Karin Morrell, who the garrison said last year became the first woman in Europe to earn the title of assistant fire chief for prevention. 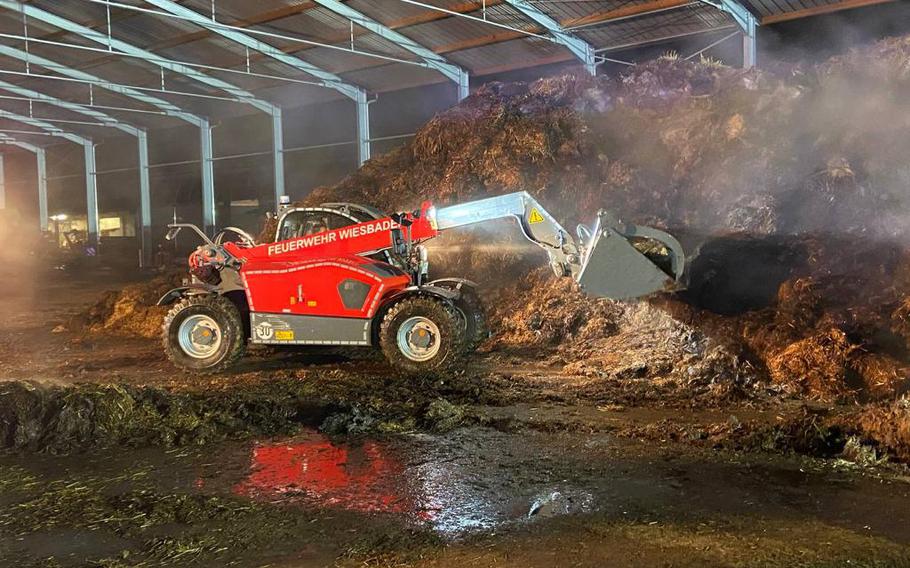 Crews use heavy equipment to extinguish hot spots at the scene of a fire at an agricultural storage area in Delkenheim, Germany, early Tuesday, Dec. 28, 2021. (Wiesbaden Fire Department)

The Americans build relationships with local fire departments because they’re likely to be the first on scene if military aircraft have off-base emergencies, Fire Chief Daniel Corzelius said in a 2019 statement.

Stars and Stripes reporter David Edge in Wiesbaden contributed to this report.