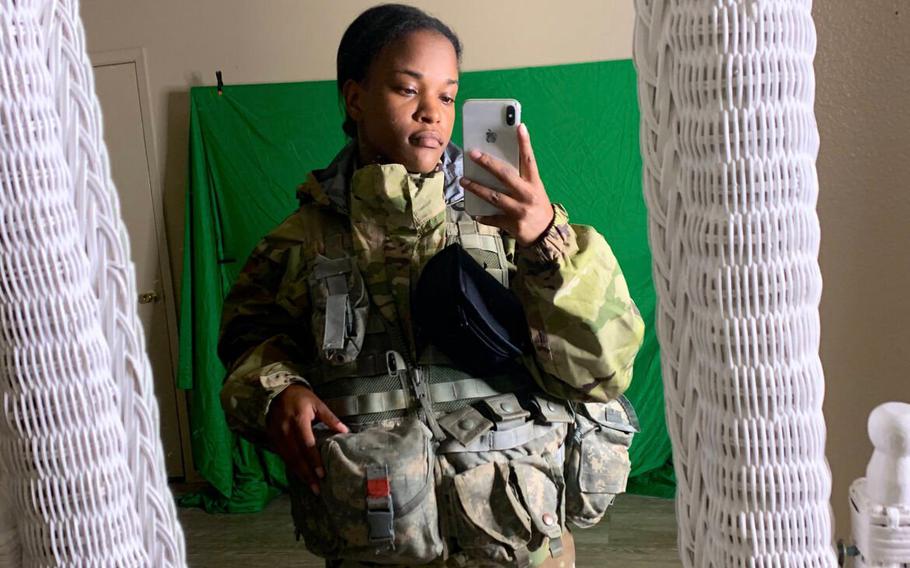 2nd Lieutenant Deja Harrison feels she was discriminated against when Harrah’s New Orleans refused to let her into its casino on Oct. 5, 2021. (Deja Harrison)

NEW ORLEANS (Tribune News Service) — A U.S. Army officer who was refused entry at Harrah’s New Orleans Casino last month has filed a lawsuit against the gaming house and its parent companies alleging that she was racially profiled and humiliated by a security manager there.

2nd Lieutenant Deja Dashante Harrison’s case already has received widespread public attention. Her video of the incident, in which a Harrah’s security manager says he doesn’t believe her identification credentials and proceeds to call the police, was posted on social media and already has hundreds of thousands of views.

The lawsuit, filed Monday in Orleans Parish Civil District Court, details Harrison’s account of what took place early in the morning on Oct. 5, when she, her brother and a friend tried to gain entry to the casino while celebrating a birthday.

After Harrison, 23 at the time, was asked for identification at the door, she produced her Louisiana’s driver’s license, the lawsuit said. It wouldn’t scan on the casino’s machine, and Harrah’s security manager was called over. He attempted to scan the license but also failed.

Harrison says she produced a vaccination card and offered her military identification but the Harrah’s security manager allegedly didn’t attempt to scan the latter. Instead, the lawsuit claims, he told Harrison “that her military ID was ‘fake,’ ‘this isn’t you’ and that ‘there is no way you made E-6 that quick,’” the latter referring to her rank of Staff Sergeant on the ID.

In fact, Harrison, a graduate of Grambling State University, had already been promoted to the rank of Second Lieutenant.

Harrison, who grew up in Algiers, explained in an interview that she joined the army at 17 while still at Eleanor McMain High School, with her mother’s permission. Having gone through the Army’s Reserve Officers Training Corps program in high school and through college, she was able to rapidly progress through the ranks.

The lawsuit says she was “shocked and dismayed as (the manager’s) dismissive treatment towards her was based on the stereotyped, biased view that a black female, with a youthful appearance, could not be a ranked officer in the military.”

She waited in the casino’s entrance foyer for more than two hours after the security manager called the New Orleans Police Department, but police never showed up, she says.

Harrison says in the lawsuit that she produced pictures of herself in uniform, Army pay stubs and other evidence of her ROTC experience, but alleges that the Harrah’s security manager wasn’t interested and continued to deride her.

Dan Real, Caesars’ New Orleans-based regional president, said the company would not be commenting on the lawsuit.

In an earlier statement, Caesars spokesperson Kate Whitely had said that Harrison had been refused entry because “the information on the military ID card did not match the information she had verbally communicated to our security officers.” She declined to comment further citing the lawsuit.

The statement said Caesars “was saddened by this situation” and had reached out to Harrison, but was told she had retained counsel.

Harrison’s lawsuit asks that Harrah’s acknowledge that it violated her human rights under Louisiana law and agree to change its policies. It also seeks an unspecified amount of damages.

“They’re a big company who say a lot about their support for diversity and the military but I want them to account for their actions,” Harrison said. “They lied about me in their statement and it made me look bad.”