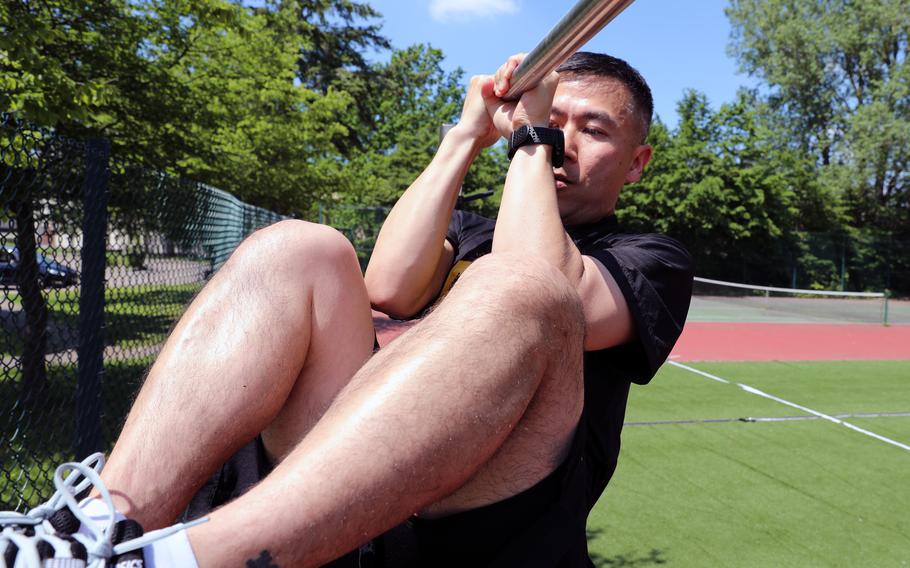 Col. Jacob Gin, the chief of human resources for Regional Health Command Europe, completes the leg tuck portion of the Army Combat Fitness Test. For 40-plus years, the U.S. Army gauged the physical fitness of its soldiers on pushups, sit-ups and a 2-mile run test. But the Army wanted a better measure of “soldier physical readiness.” And now it has it, thanks — in part — to the University of Iowa. (Russell Toof/U.S. Army)

IOWA CITY, Iowa (Tribune News Service) — For 40-plus years, the U.S. Army gauged the physical fitness of its soldiers on pushups, sit-ups and a 2-mile run test.

But the Army wanted a better measure of "soldier physical readiness." And now it has it, thanks — in part — to the University of Iowa.

In 2019, the Army chose the UI Technology Institute and its Virtual Soldier Research program to conduct a neutral, third-party validation of its newly designed, six-part Army Combat Fitness Test.

"They wanted an entity to make sure that the science behind how they chose the events is correct, and they selected the University of Iowa," said UI professor Karim Malek, director of the Iowa Technology Institute and Virtual Soldier Research.

"Why? Because of the Santos program," Malek said, referencing the virtual soldier he created. "Because of the link to athletics and the College of Medicine. We have this incredible, unique situation here that does not exist anywhere else in the U.S."

UI researchers, for the first phase of their assessment, were charged with evaluating whether the Army's "baseline soldier physical readiness requirements study" — conducted to determine physical demands on soldiers in combat — was successful in informing the new fitness test.

"The University of Iowa assessment of the (readiness requirements study) is that it was conducted by a well-qualified team of scientists and military personnel, the methodologies utilized were appropriate and rigorous, and the results provide strong baseline empirical validation for the Army Combat Fitness Test," according to a UI report of its findings.

That new test — which started with an evaluation of 23 physical fitness tests and boiled them down to six — spans a range of fitness measures, including muscular strength, muscular endurance, cardiovascular endurance, flexibility, agility, coordination, power, speed and balance.

The exercises that soldiers now are measured on include dead-lift, leg tuck, standing power throw, hand-release pushups, 2-mile run and a spring-drag-carry exercise.

The Army Combat Fitness Test became the branch's test of record in 2020 and will see full implementation in April 2022. Under the new protocol, active soldiers must pass the combat fitness test twice annually, while reserve and guard soldiers must take it once annually.

In its second validation phase, the UI Technology Institute — with help from its virtual soldiers, Santos and Sophia — confirmed the six new fitness drills' ability to predict whether a soldier has the strength needed to perform in combat.

Using sensors attached to a jumpsuit similar to one used for the movie "Avatar," UI researchers collected data from Army ROTC cadets performing common soldier tasks — like hauling supplies and climbing with gear through windows and over barriers.

They then collected data from cadets performing the new fitness skills — to compare with the combat-situation demands.

At first, volunteers were hard to recruit — as many thought participation meant completing the full fitness exam, said Chris Murphy, an application developer for the Virtual Soldier program.

"I think they thought that we were really going to make them go through the actual (fitness test)," Murphy said. "So when they get here, we tell them it's not our job to exhaust you. We're going to have you do this once so we get the motion. Then I put it into Santos, and Santos is the one who gets exhausted."

By uploading the motion and exertion data into their virtual soldier system, and then assigning Santos the strength requirements and duties, UI researchers are able to determine "if successful completion matches the strength needed to perform combat duties."

"The modeling validates the spectrum of drills is needed to accurately measure the threshold of physical requirements," according to a UI assessment.

In a third phase of its fitness-related collaboration with the Army, the UI Technology Institute has started to evaluate cumulative effects of repetitive activities — looking at muscle strength, fatigue and energy expenditure.