A look inside Camp Atterbury, the Army base housing thousands of Afghan evacuees

by
Lawrence Andrea and Rashika Jaipuriar
• The Indianapolis Star • October 15, 2021 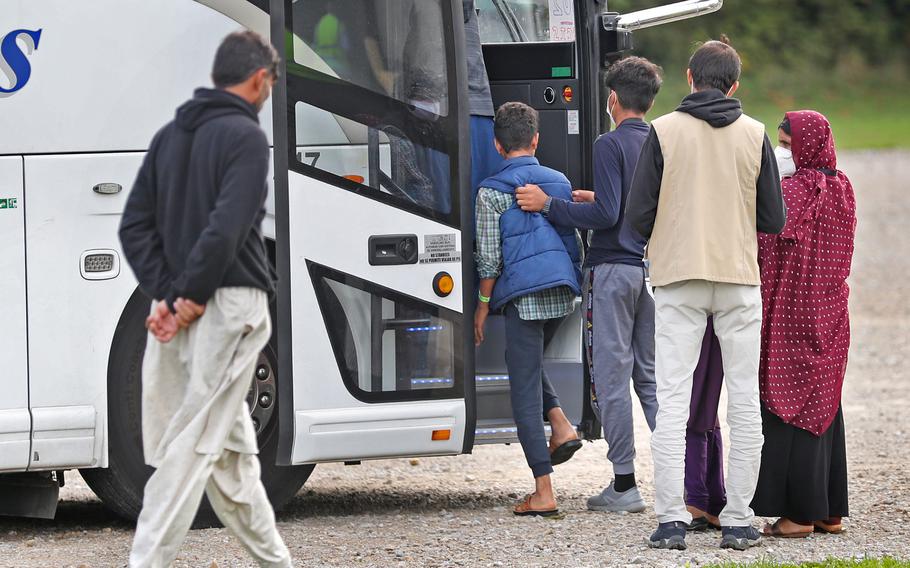 Operation Allies Welcome evacuees get on a bus to take them back to their communities Thursday, Oct. 14, 2021 at Camp Atterbury in Edinburgh, Ind. (Kelly Wilkinson, IndyStar/TNS)

EDINBURGH, Ind. (Tribune News Service) — Amid a collage of cartoon characters and princesses, drawings of Afghanistan's black, red and green flag decorated a wall at a United States Army base in Central Indiana.

Across the room, "Welcome" was scrawled in Farsi on a white board.

Hundreds of young Afghan children drew the flags and filled in the coloring pages while their parents discussed their uncertain futures at Camp Atterbury in Edinburgh, Ind.

"This is one of the first stops that people get an opportunity to kind of share their experience and what happened," Aaron Batt, federal coordinator for the Department of Homeland Security, told reporters at the camp Thursday.

In just over a month and a half, government officials and aid organizations have transformed one of Indiana's major military training sites into a temporary home for some of the men, women and children who fled Afghanistan as the Taliban swept across the country in August.

"The goal of our facility here is to have as efficient of a process as possible," Capt. Nigel Liefveld, who handles evacuee reception at the facility, said. "We understand that the guests are tired. They've traveled a long way."

The Indiana site is one of eight across the country hosting evacuees as part of Operation Allies Welcome, a Homeland Security effort offering refuge to Afghans in the aftermath of the Taliban takeover. More than 70,000 people have settled at the sites across the country, and the majority of the evacuees worked alongside the United States during the 20-year war in Afghanistan. 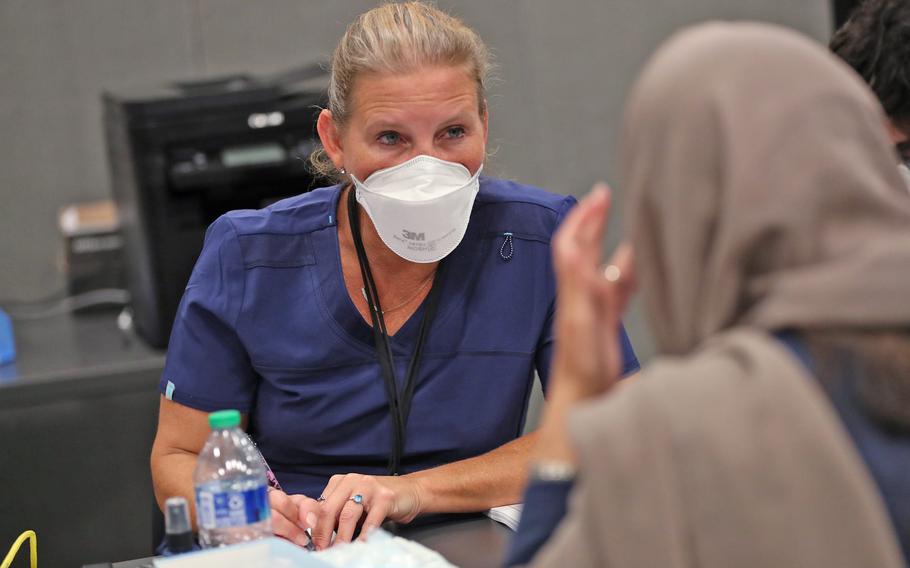 A medical professional speaks with an evacuee in the acute medical building as part of Operation Allies Welcome, Thursday, Oct. 14, 2021, at Camp Atterbury in Edinburgh, Ind. (Kelly Wilkinson, IndyStar/TNS) 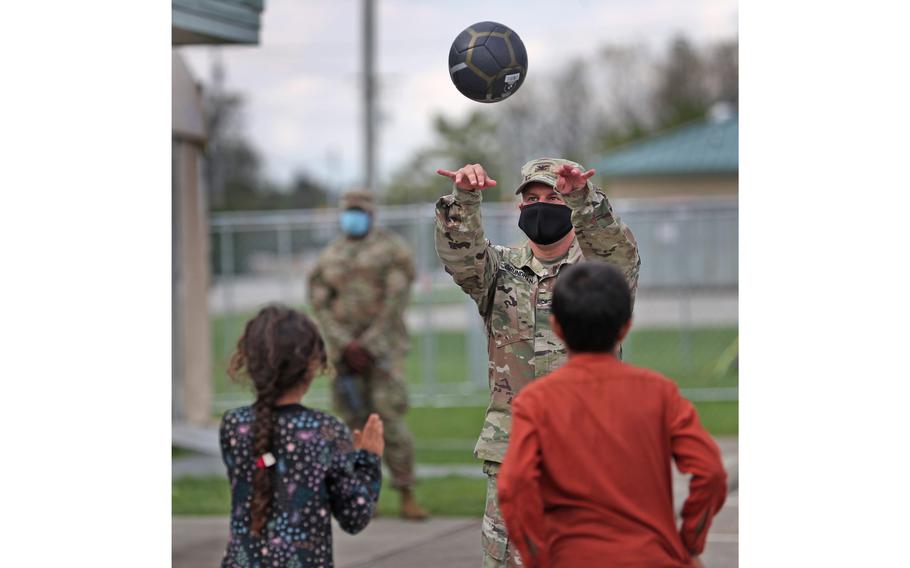 Many evacuees have large families

During the height of the camp's intake process, anywhere from 80 to 200 evacuees arrived every hour, greeted with a flood of paperwork and medical screenings. Some spoke English, and others relied on translators. Many came with large families — the average family size is between seven and eight people.

In the past few weeks, that rush and logistical scramble has largely slowed. More than 6,700 Afghan evacuees are currently being housed across six makeshift neighborhoods at the base.

"We have gone through lots of testing and health exams," Aziz Sabat, a 58-year-old former Afghan government worker said of the camp. "But this is a very good place for everyone. (Everyone) is very generous, and we have good services available all the time." 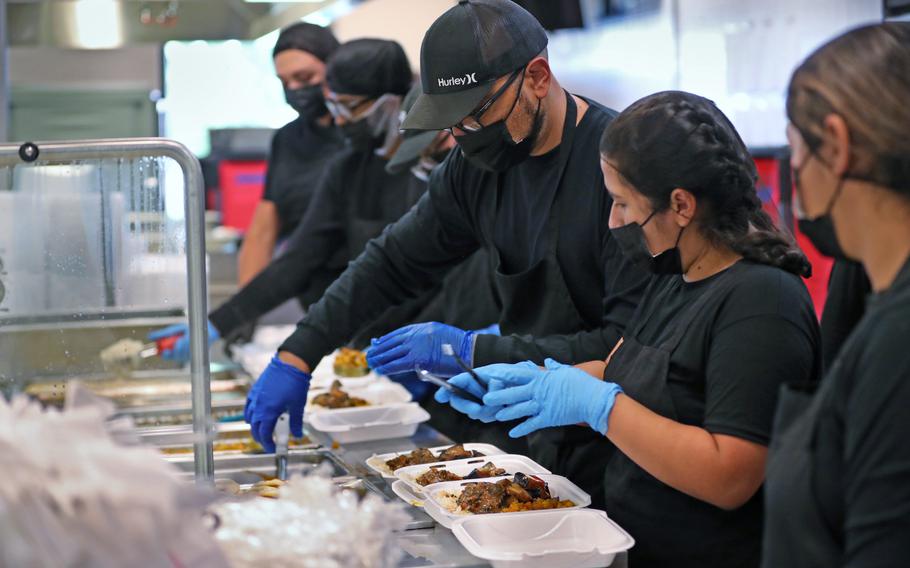 Food is readied for lunch in the dining hall as part of the Operation Allies Welcome program Thursday, Oct. 14, 2021, at Camp Atterbury in Edinburgh, Ind. (Kelly Wilkinson, IndyStar/TNS) An Afghan family walks to a bus to take them back to their community at the Operation Allies Welcome Afghan evacuees settlement Thursday, Oct. 14, 2021, at Camp Atterbury in Edinburgh, Ind. (Kelly Wilkinson, IndyStar/TNS) 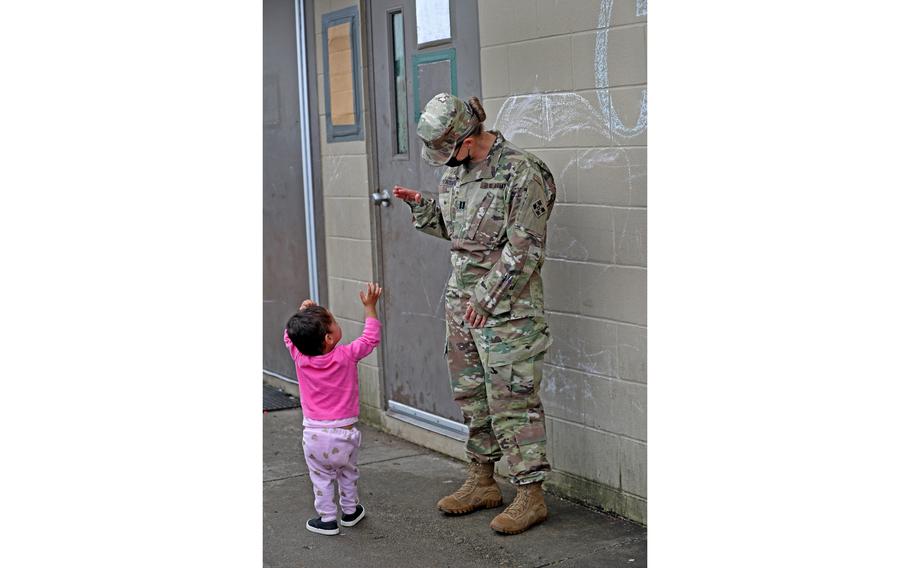 The evacuees live in 68 single-story barracks, sprawled across a portion of the base's 36,000 acres. Men and women are housed separately, though officials said they try to keep families as close together as possible. The camp's two dining halls serve traditional Afghan food, including naan flatbread and kafta kebabs. Snack vendors are stationed throughout the neighborhoods.

The camp has initiatives to involve the evacuees, too, officials said, hosting neighborhood town halls and food council meetings as a way for Afghans to offer input at their temporary living situation. Some of those meetings have already led to significant changes, including switching to Basmati rice, for example, and making it easier for people to receive donations.

Both adults and children take English language learning classes, and soldiers teach American culture courses each week. Evacuees learn about everything from how to cross a street at a crosswalk to how to use medical services to facts about different states.

Most of the evacuees tend to ask questions about costs of living and access to jobs in different states, Staff Sgt. Steven Davidsmeyer, one of the teachers, said.

They call him "ustaad," which means "teacher" in Farsi.

"We've developed very deep relationships with some of these people," Davidsmeyer, who was stationed in Afghanistan in 2019 and 2020, told IndyStar. "I'm very passionate about this mission."

That connection he has to the Afghan people, Davidsmeyer added, makes it hard for him at times.

"The hard part is knowing that some of their family members are still over there. They worry about that," he said. "There's no class I can teach to them (about that). I can tell them about the future here in America and how great it's going to be for them. But always in the back of their minds it's that call to their families back there."

On Thursday, children could be seen playing basketball and volleyball with soldiers in the streets. Some sat outside their barracks and chatted on the phone. Still others waited outside a United States Citizenship and Immigration Services building to apply for work authorization.

And when the evacuees are not in classes or completing the necessary steps to continue their process of resettlement, they are often attending activities like movie nights and art classes hosted by camp officials and volunteers. Anything to "ease the stress" and "get them back to living that normal day to day life," Capt. Ken Cummings explained.

"It's a great time to be able to watch them and just see how happy and earnest they are in learning about America." An Operation Allies Welcome evacuee gives a thumbs up to touring members of the media, as he sits outside one of services buildings Thursday, Oct. 14, 2021, at Camp Atterbury in Edinburgh, Ind. (Kelly Wilkinson, IndyStar/TNS) 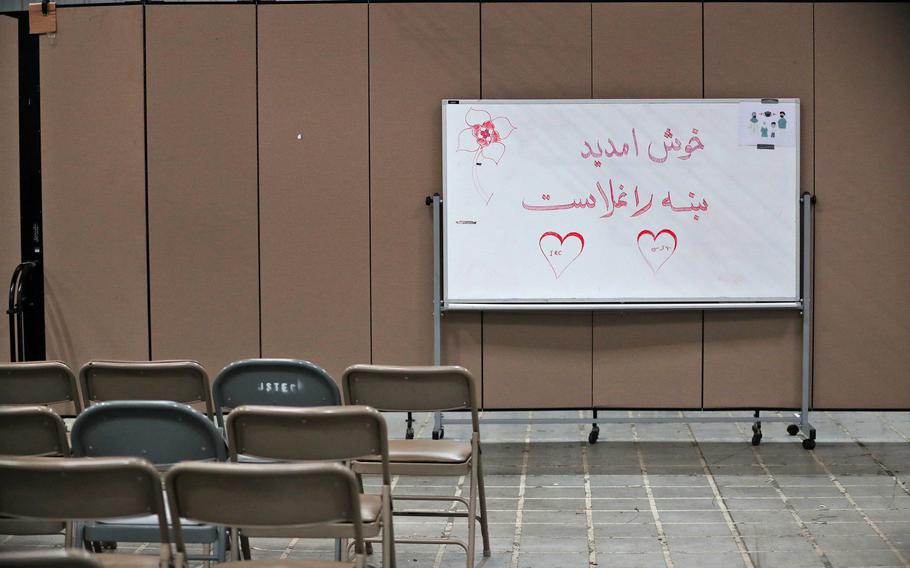 A translated welcome sign is ready to greet evacuees at the IRC as part of Operation Allies Welcome, Thursday, Oct. 14, 2021, at Camp Atterbury in Edinburgh, Ind. (Kelly Wilkinson, IndyStar/TNS) Children’s drawings line the walls in the IRC where evacuees go through processing when they arriive for Operation Allies Welcome in Camp Atterbury. Photo taken Thursday, Oct. 14, 2021 at Camp Atterbury in Edinburgh. In the middle of these drawings, one drawing of an American flag with the words, “I love u army,” is seen. (Kelly Wilkinson, IndyStar/TNS)

So far, about 330 Afghans have left the camp to resettle elsewhere across the U.S. Evacuees can leave once they've fulfilled their resettlement conditions and have work authorization, or if they've relocated near family and friends who are already living in the U.S.

When they leave the camp varies on a case-by-base basis, officials said. It could be weeks or months after their arrival. One man who had been at Camp Atterbury for more than a month said he was "counting down the days" until he and his family could find a permanent home.

But back in the room where migrants discuss their resettlement plans, a drawing of an American flag hung among the sketches.

Written across one of its white stripes were the words: "I love u Army."