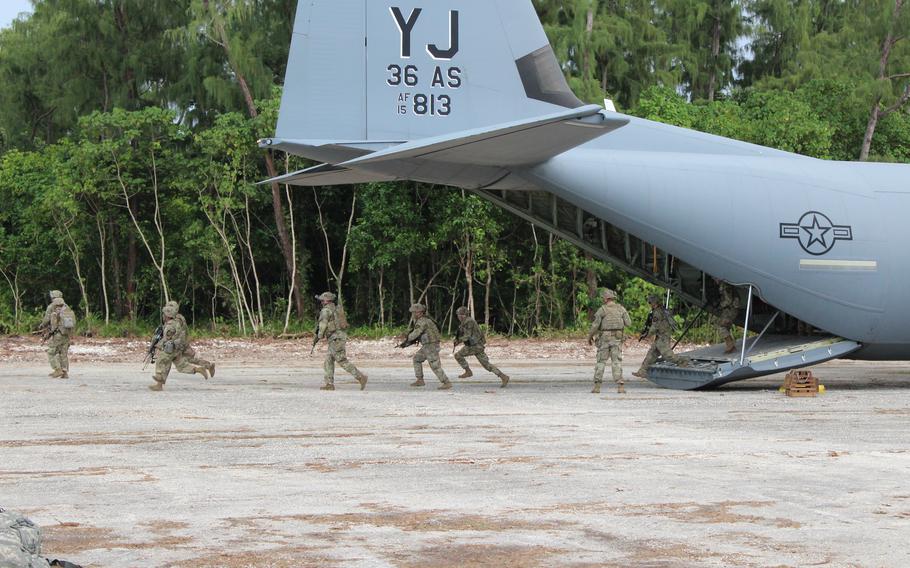 The 240,000-acre Joint Readiness Training Center is one of the Army’s premier proving grounds, but Fort Polk is not jungle and ocean, like Hawaii is, or part of the Pacific where the 25th Infantry Division would fight its next fight.

With that logic in mind — and a cost savings that will likely run into the millions of dollars — the Army intends to break the paradigm and set a new precedent by holding the first-ever Home-station Combat Training Center evolution, in this case in Hawaii.

For fiscal 2022, which started Oct. 1, the Army as a whole is planning 20 combat center rotations for brigade-sized formations, but for the first time, it will have one focused on jungles and maritime in Hawaii, and another in Alaska to boost Arctic capabilities.

The Joint Pacific Multinational Training Center will run Tuesday through Oct. 28 on Oahu and Hawaii island focusing on training for the 3rd Infantry Brigade Combat Team at Schofield, which has about 4,000 soldiers, alongside about 200 Indonesian and Thai soldiers.

All Hawaii active-duty forces are now focused on training to deter China from invading Taiwan or expanding elsewhere militarily in the Western Pacific. The Army is retooling to become a missile-firing force.

Training staff from the Joint Readiness Training Center will come out to Hawaii to participate in the large-scale exercise.

“We will be the first — and we will learn a lot through this iteration,“ said Lt. Col. Jamie Dobson, a spokeswoman for the 25th Division, adding the model likely will be repeated in the future.

“I think we’ll try to do it again because I think we’ll find that having this realistic training environment, having the amphibious assault exercise, being able to work with our partners and the joint force here in this environment, we’re going to see a lot of benefit,“ Dobson said.

A full 60% of the approximately 12,000-soldier 25th Infantry Division is expected to participate in one way or another between the force getting the training — the 3rd Brigade — and opposing force and additional enablers such as helicopters, logistic and artillery.

A much more staggered approach is being taken for the upcoming large-scale training in Hawaii to keep community impact to a minimum.

The exercise approach falls within the Army’s new Regionally Aligned Readiness and Modernization Model, or ReARMM, that seeks to better balance the need to project power with scheduled times for modernization and training, which is supposed to give soldiers and families more predictability.

“In the future, a unit’s rotation through a combat training center might not be the only requisite for mission readiness as leaders acknowledged the value of specialized training,“ the service said in March.

The Hawaii experiment also comes with the Army in May releasing a $173 billion budget proposal for fiscal year 2022 reflecting a $3.6 billion reduction from last year’s enacted budget.

Those combat training centers are at Fort Polk, at Fort Irwin National Training Center in California, and at Hohenfels Training Area in Germany.

“We have not cut any (JRTC rotations) — two have moved to exportable,“ Maj. Gen. Sean Swindell, assistant deputy chief of staff, said in a June Army release. “We recently published our Arctic strategy, and we are going to come up with an Arctic rotation in fiscal 2022. We are also looking at a ( U.S. Indo-Pacific Command ) exportable rotation out in Hawaii.”

The Association of the U.S. Army said the Arctic training would occur in Alaska.

The 25th Division said in a release that the new Home-station Combat Training Center effort in Hawaii “will save significant resources and time while maximizing training in the challenging jungle and maritime environment.”

The big exercise also takes the place of Lightning Forge in Hawaii, an annual brigade-level precursor to the rotations through the Joint Readiness Training Center, officials said.

Training will include the use of blank ammunition and explosive simulators during day and night hours at Dillingham Army Airfield, Kahuku Training Area, Kawailoa Training Area and in Helemano and Schofield Barracks East Range.

Additionally, Pohakuloa Training Area on Hawaii island will be used. The Army did not want to reveal the exercise’s amphibious components to ensure soldiers get the full training benefit, but one possibility is the use of Army Logistics Support Vessels at Joint Base Pearl Harbor-Hickam.

The big transport vessels are used to make equipment runs to Hawaii island and have been increasingly tested in Hawaii and the Pacific to offload missile-firing trucks that could strike adversary ships at sea in the event of conflict in the Western Pacific.

In a throwback to World War II, both the Army and Marines are training in Hawaii to become 21st century island-hopping forces. Long-range precision missiles and artillery are the Army’s No. 1 modernization priority.

Between 1943 and 1947, the Army acquired 2,545 acres in Kahana and Punaluu valleys for training, according to the Army Corps of Engineers. Part of the push came after Guadalcanal—where the 25th Division earned its “Tropic Lightning“ nickname — demonstrated the need for jungle training. A big camp was set up in Kaaawa.

Basic jungle warfare was conducted at the “red“ and “blue“ courses. Advanced jungle warfare training and instructor training took place at the “green “ course. The Army Corps said Japanese villages and pillboxes were built along with temporary barracks, a mess hall, a bakery and shower facilities.

The facility was so big, comedian Bob Hope paid a visit in 1944, firing a belt-fed machine gun from the hip.

Two days after that, the Army Logistics Support Vessel LTG William B. Bunker out of Hawaii pulled up on the beach there carrying two High Mobility Artillery Rocket System trucks to practice “force projection and expeditionary sustainment,“ the Army said.

Hawaii residents can expect an increase in helicopter and unmanned aircraft flights and convoy traffic during the upcoming exercise, the Army said.

“The 25th Infantry Division appreciates the community’s understanding and continued support for local military training,“ the service said in a release. “While sometimes loud, the sounds of training represent how the military ensures the nation’s service members are ready to accomplish the mission and return home safely.”