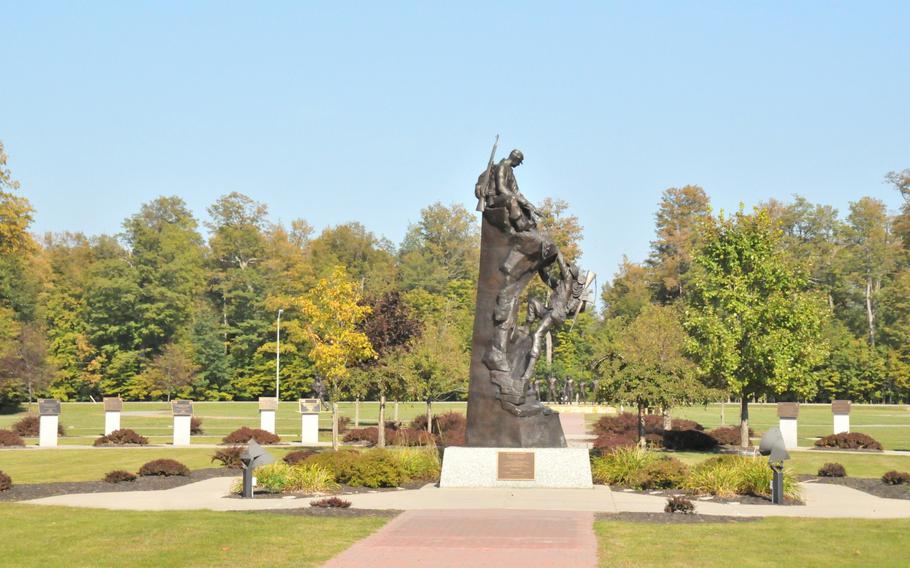 FORT DRUM, N.Y. (Tribune News Service) — From the unit’s reactivation in 1985 to having recently been pulled from Afghanistan, and the efforts of division veterans in World War II and beyond, the rich history of the 10th Mountain Division spans generations.

Part of that history, a link between the World War II veterans and their modern counterparts from the division’s reactivation, is Fort Drum’s Military Mountaineer Statue, which turns 30 years old this year. Monday marks the anniversary of its unveiling.

The statue was unveiled on Oct. 4, 1991, and has become a symbol for the soldiers of the 10th Mountain Division, both past and present.

The idea of a monument for the division was conceived by World War II veterans. Leading the charge were members of the National Association of the 10th Mountain Division and, in particular, the late Arthur “Art” F. Thompson, a 10th Mountain veteran and the co-chair of the committee to build the monument.

According to Art’s son, Thomas “Tommy” A. Thompson, his father and the late Kansas Sen. Robert J. Dole were the co-chairs of the fundraising committee and raised $135,000 to build the monument. The National Association of the 10th Mountain Division was the sponsoring organization, and the fundraising efforts were overseen by the 10th Mountain Division Foundation, a separate organization.

“We’re very proud of the work that he did to raise the money for the statue; it was one of a number of efforts,” Thompson said of his father on behalf of the family. “To us, it was just dad being dad, he was always helping people and doing things. He was extremely proud of his service in the 10th and he was extremely proud that the Army chose the 10th Mountain Division as its designation for this new light infantry division they established in 1985.”

Thompson’s father was in Italy in 1945, and for 25 years after the war, he would say very little about it. Around 1970, a couple members of his squad found him and told him about the National Association of the 10th Mountain Division, and he was very active in the association up until a few years before he died in 2014.

The elder Thompson entered the army in May 1943, and was discharged in September or early October 1945. He was promoted to the rank of sergeant when he was made squad leader at just 19 years old. He was combat-wounded and was awarded the Bronze Star twice, once for valor in action in Italy.

His unit of the 10th Mountain Division landed at Naples, Italy, on either Dec. 23 or Christmas Eve, 1944, and fought through to the end of the war, leading the Allied breakout in the spring of 1944 through the North Apennine mountains, into and across the Po Valley and up Lake Garda. They were on their way to the Brenner Pass, which connects Italy and Austria, when the war ended in Italy.

“His service was that, as he put it, just another one of the 16 million people who helped save the world in World War II,” Thompson said of his father. “I know that he was very proud of having served, and very proud of what his unit accomplished.”

He added that his father thought it was extremely important that what was then the brand new 10th Mountain Division understands where its name came from and what its forebears had done.

The 10th Mountain Division, the “Ski Troops” as they were called during the war, did some interesting things despite coming into combat very late, Thompson said of his father’s unit. They were the last U.S. combat division committed to the European theater before the end of the war, but for the period they were in combat, they accomplished as much and lost a higher percentage of people than any other combat division at the time.

With the reactivation of the 10th Mountain Division in 1985, division veterans, Thompson’s father included, wanted to salute new generations of mountaineers and create a permanent link between veterans that trained at Camp Hale and the men and women of the modern light infantry division.

Featuring a World War II infantryman helping a modern infantryman up a mountain, the 17-foot-tall sculpture was created by Colorado-based artist Susan Grant Raymond. The search for an artist began in early 1989 with fundraising officially kicking off at the Association’s national reunion later that summer. Raymond’s interpretation of the concept art was selected as the best representation of the connection between the World War II veterans and the modern soldiers.

Originally set on the corner of Mount Belvedere Boulevard and Memorial Drive South, now Enduring Freedom Drive South, the statue was moved on March 30, 2007, as part of a larger planned park project that was completed across the street from Hays Hall, Division Headquarters.

The Military Mountaineer Statue was soon joined in the Memorial Park by some of Raymond’s other masterpieces, The Fallen Warrior and Hope for the Future monuments. Other monuments and memorials have since been added to the park. Ms. Raymond also created the North Country Honors the Mountain monument in Thompson Park.

“I didn’t expect my relationship with the 10th Mountain to sort of be ongoing and have so many facets to it,” Raymond said. “There’s some wonderful friendships I made back there, and I love Watertown and Fort Drum and all that area which I never would have known about or been able to enjoy if it hadn’t been for those monuments; they’re all very different and came at different times in my life.”

Before the monument undertaking, Raymond said she associated the 10th Mountain Division mostly with skiing. She grew up in Colorado learning about Camp Hale, which was established in 1942 in Colorado to provide winter and mountain warfare training during World War II. It was the late Thompson who let her know that they were no longer to be seen only as ski troopers, that they were mountain troopers, when looking over her original mock-up for the monument.

She eliminated the skiers that were originally incorporated into the design and changed the upper soldier to a World War II soldier, which expanded the concept to the old helping the new — exactly the concept those involved in the effort were looking for. So, Raymond got the job.

Not alone in her efforts, Raymond was assisted from start to finish by her friend Sandy Hildner. Even Raymond’s kids got involved, with her son tasked with enlarging the weapons of the two soldiers and her daughter working on the 10th Mountain Division logo on the bottom. Ms. Raymond recalled that right before the sculpture was finished, her son asked if he could put a peace sign on one of the weapons, which she originally thought was a horrible idea but didn’t say anything.

“I asked him to show me what he meant, and it was in the barrel of the M-4 and pointing down so it could hardly be seen,” she said. “When it was all cast, General Arnold said that the peace sign was OK with him because they were just coming at peace from a different direction, which I thought was pretty cool.”

The peace sign remains on the monument to be seen by those lucky enough to find it.

The creation of the monument took countless hours in total, from getting everything together and going to Colorado’s Fort Carson to watch soldiers on the climbing wall, to getting material together to make sure they got the details right, and everything in between. Raymond based the statue’s modern soldier on one of the Fort Carson soldiers who helped them.

The then-commanding general of Fort Drum and the 10th Mountain Division, Peter Boylan, selected the late Thompson as the Non-Commissioned Officer of the Year for 1992 for his work to bring the monument to fruition.

A few years after the unveiling, the younger Thompson served for 23 years on the board of the 10th Mountain Division Foundation and retired from the position in 2016. Present for the unveiling ceremony, along with most of his siblings and, of course, his father, Thompson said the statue was incredibly well received in 1991.

The division band was present, along with Gen. Boylan and his senior staff, and the Association had sent out an invitation to all of its members in Northern New York and around the country. An estimated 60 people, between veterans and their spouses, showed up.

The monument’s home, Memorial Park, was described by Thompson as a moving sort of place. When his father died, he was cremated, and Thompson had the mortuary hold out a couple of vials of ashes, one of which he scattered at the base of the Military Mountaineer Statue.

Doug Schmidt, Association historian, has his own personal history with the statue. Shortly after he was stationed on Fort Drum in December 1998, his family came for a visit and his mother snapped a picture of him sitting on the base of the statue. She later framed it for his great-grandfather, known as Grandpa Bob, who was a World War II veteran of the division and an inspiration to Schmidt.

Schmidt, who now has the picture in his own house, said his Grandpa Bob kept the picture on a shelf until he died.

An artist for life, Raymond still creates out of her Colorado studio, though she is no longer making monuments. The Military Mountaineer Statue remains her tallest work.

The soldiers featured on the monument are 1.2 times larger than the average human, and the large structure had to be created in two sections as Raymond’s workshop is only 12-feet high.

With four of her pieces prominently featured in the north country, and the Military Mountaineer Statue being the one to set off a chain of events, Raymond remembers that while the day of the unveiling 30 years ago was grey, rainy and muddy, it was still a day full of happiness and positive energy.

“The dedication, around the clearing, there were soldiers standing all around just stock still,” Raymond said. “When I see those pictures and remember that vision, I think of what Mike Plummer said about the sun never sets on the 10th Mountain Division.”

Retired Col. Michael T. Plummer served at Fort Drum as assistant division commander after the division’s reactivation in the 1980s.

“I think of that scene as sort of symbolic of that,” she said.