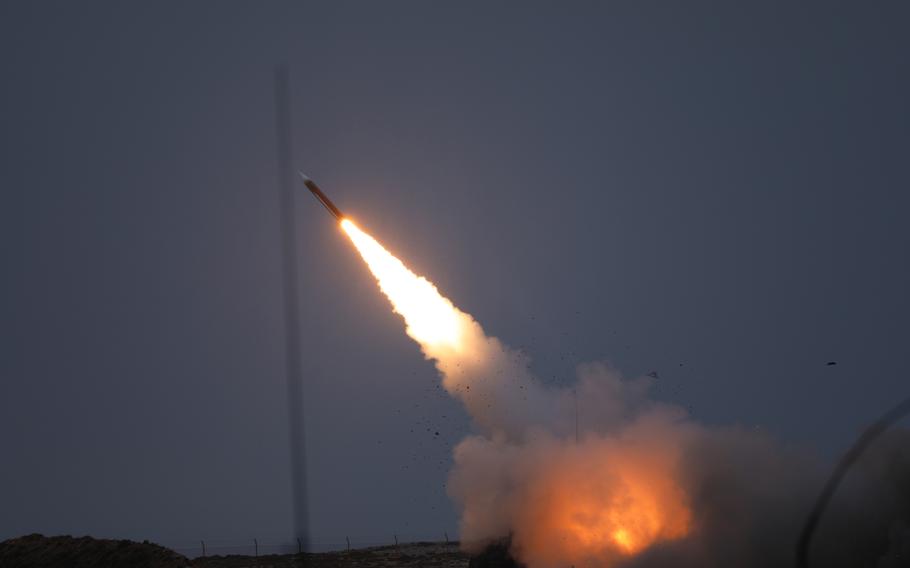 A Patriot missile is fired during an exercise on the Greek island of Crete, Nov. 23, 2020. (Vincent Wilson/U.S. Army)

HONOLULU (Tribune News Service) — With little fanfare, the U.S. Army earlier this month fired from Hawaii for the first time two Patriot missiles — the kind used by 15 nations for defense — knocking out two simulated cruise missile threats at a range of about 20 miles.

Taiwan, South Korea and Japan use Patriots as part of their air defenses. The South China Morning Post reported that Taiwan has purchased over 400 Patriot missiles from the United States since 1997.

The island nation is buying Patriot Advanced Capability 3 (PAC-3) Missile Segment Enhancement missiles, with deliveries starting in 2025, as a further hedge against Chinese threats and the possibility of invasion, according to news agency Reuters.

Bi-khim Hsiao, Taiwan's de facto ambassador to the United States, told the Honolulu Star-Advertiser during a recent trip to Honolulu that Taiwan is in "no position to engage in an arms race with China, but we do have to be smart about our asymmetric defenses," adding that means forces that are mobile, nimble, stealthy, harder to detect and in greater numbers "that would make any consideration of an actual invasion too painful."

The truck-mounted PAC-3 is the Army's premier guided air and missile defense system, capable of countering aircraft and sophisticated tactical ballistic and cruise missiles. Each missile costs over $2 million.

The Sept. 1 live-fire test of PAC-2 interceptors from the Pacific Missile Range Facility on Kauai was not intended as a defense-of-Hawaii scenario, and in fact followed a simulated Patriot launch during an exercise near Okinawa, Japan, and the actual firing of two Patriots in July during exercise Talisman Sabre in Australia.

The Australia live fire — with the 38th Air Defense Artillery Brigade knocking out two drones — also was a first.

"We are trying to demonstrate our ability to quickly move our units around the Indo-Pacific to be able to counter any threat that is out there," Army Col. Matthew Dalton, commander of the 38th Brigade, said at the time.

The 94th Army Air and Missile Defense Command, headquartered in Hawaii, conducted the Kauai Patriot launch Sept. 1 along with an Avenger live fire using a Humvee mounted with short-range Stinger missiles that can be used against cruise missiles, helicopters and drones.

The target missiles also were fired from the Pacific Missile Range Facility. Soldiers from the 1st Battalion, 1st Air Defense Artillery Regiment out of Kadena, Japan, deployed to Kauai to conduct the Patriot missile firings.

"Deploying our forces across the Indo-Pacific theater and then integrating them into a joint fires architecture with the Navy is vital to our mission of ensuring peace and prosperity across the Indo-Pacific, " Brig. Gen. Mark Holler, the 94th commander, said in a release. "Our ability to fight and win our nation's wars rests on our capacity to function as a team of teams."

Patriot since January 2015 has intercepted more than 150 ballistic missiles in combat operations around the world, according to Raytheon Missiles &Defense.

The Patriot missile road show is intended to demonstrate to Pentagon planners looking at the defense of Guam and Pacific nation allies that the missile is a viable and mobile candidate for the job, said Bryan Clark, director of the Center for Defense Concepts and Technology at the Hudson Institute.

"This is all about the Army showing its relevance for the Pacific theater," including the defense of remote installations in the island chain that runs through Japan, Taiwan and the Philippines, Clark said in July.

The Army also is trying to make the case that Patriot is "part of the solution maybe for Guam — because right now there's a big debate in D.C. about the defense of Guam and how best to do that," Clark said.

Riki Ellison, chairman of the nonprofit Missile Defense Advocacy Alliance, said the Army is "getting pushed out right now" from air defense of the Pacific, and "they want to show that they are a player to distribute missile defense" alongside the Navy and Air Force.