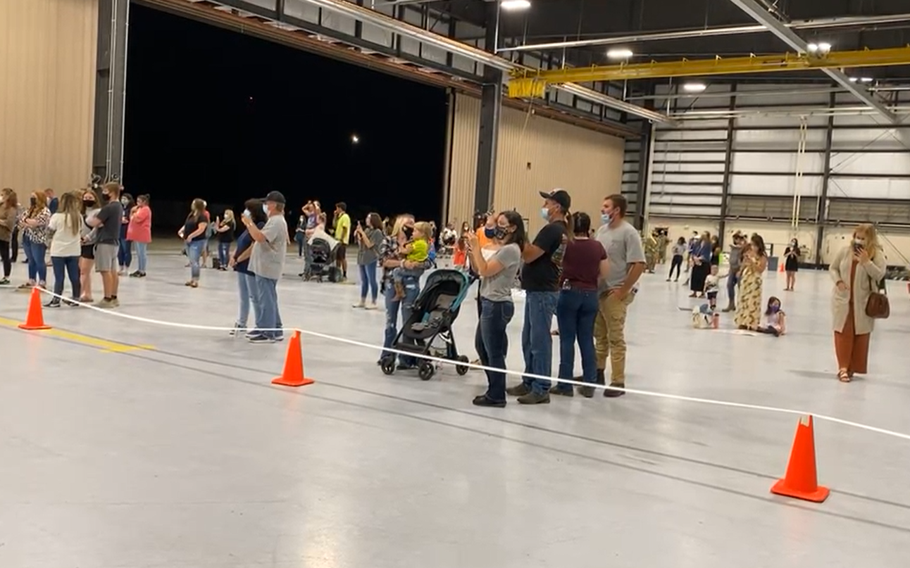 Soldiers with Fort Riley’s 1st Squadron, 6th Cavalry Regiment, 1st Combat Aviation Brigade were greeted by their families as they stepped onto Kansas soil late Friday night. The group of 125 soldiers, who are part of the 1st Infantry Division, returned from a nine-month deployment to South Korea.

As part of an Army redeployment ceremony, the group of soldiers disembarked from large buses at Marshall Army Airfield and marched in formation into the hangar where their families waited. After the chaplain’s prayer and a few words of support from commanding officers, the soldiers — wearing their black Cavalry hats — dispersed to find their loved ones.

Hannah Wurtz said “it’s been a long seven months” without her boyfriend, Sgt. DJ Jones. She was among about 150 other people waiting in the hangar.

“It’s very exciting,” Wurtz said. “It feels like we’re all one big family.”

Wurtz held a sign that said, “I’d wait for you forever, but 7 months was long enough.” Other families also sported handmade signs.

“Mine says, ‘Hand over my daddy,’” said 5-year-old Miranda Browning.

Miranda was joined by her mother, Kali Browning, and her little brother, 1-year-old Zane, as they waited for her father, Sgt. Larry Browning.

Holly Hemminger and her son, 9-month-old Braxton, waited alongside the Browning family with their own sign.

“So, there’s a story behind it,” Hemminger said. “The day that my husband left, Braxton had a onesie on that said, ‘Don’t worry Daddy, I’ll take care of Mommy.’”

Hemminger’s sign Friday night read: “Don’t worry Daddy, I took good care of Mommy, but it’s your turn now.” She said her husband, Spc. Michael Hemminger, was gone for about seven months instead of nine to allow for some family leave when Braxton was born.

Fort Riley officials said several hundred soldiers from the battalion left for Korea in December as part of a rotational force mission in that country. The first group of soldiers arrived on post earlier in September, and the entire battalion is expected to return by late November.

They will be replaced as part of the rotational mission by the 4th Squadron (Heavy Attack Reconnaissance), 6th Cavalry Regiment, 16th Combat Aviation Brigade from Joint Base Lewis — McChord in Washington.

The group who returned Friday night was originally scheduled to arrive on post at Fort Riley around 12:30 a.m. Saturday but landed sooner and were able to leave with their loved ones by 11 p.m.