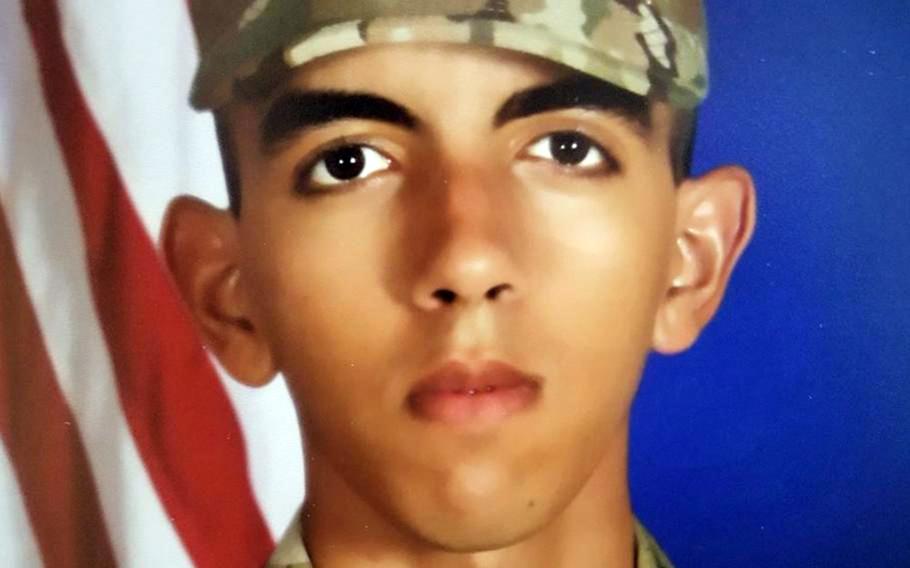 SCHOFIELD BARRACKS, Hawaii – A Hawaii-based soldier was sentenced to 62 years in prison on Tuesday for bludgeoning and then stabbing his sleeping wife to death early this year.

Spc. Raul Hernandez Perez, 23, an intelligence analyst assigned to the 500th Military Intelligence Bridge, confessed to the premediated killing of Serena Roth, 25, inside her Schofield Barracks home on Jan. 10. It was part of a plea bargain that called for a sentence of 50 to 65 years.

“I would like to apologize for what I’ve done,” he told the court and Roth’s family members. “I don’t expect them to forgive me.

“During the time I will be locked up, I will do everything I can to become a better human.”

Col. Mark Bridges, a judge in the 25th Infantry Division Staff Judge Advocate’s Office, also sentenced the soldier to a concurrent two-month sentence for disobeying his first sergeant’s order to have no contact with Roth.

Bridges, who also ordered the soldier to be reduced in grade to E-1 and dishonorably discharged, made his ruling after two days of testimony from Hernandez Perez, family members and friends of the couple.

Hernandez Perez displayed little emotion as he answered questions about his background and relationship with Roth from defense attorney Capt. Brian Tracy.

Hernandez Perez and Roth married on Jan. 9, 2020, but their marriage was rocky, with frequent quarreling, according to evidence presented at an Article 32 hearing in May. Hernandez Perez filed for divorce in October 2020 and later obtained a restraining order against her. He moved out of their home and into barracks at Schofield. But the couple got together for their first anniversary on Jan. 9, went to a movie and were out late.

Hernandez Perez told the court on Monday that he woke up in the middle of the night, grew angry and decided the only way of getting her out of his life was to kill her.

He described how he used a baseball bat to smash the back of Roth’s head, then stabbed her in the back four times. He then stuffed her body into a garbage can, where military police discovered it three days later after family members requested a welfare check for Roth.

Hernandez Perez’s family and friends painted a picture of an introverted and quiet person who had no history of angry outbursts or violence.

“I’ve always looked up to him, and I always will,” said his younger sister, Rosemary Hernandez, who testified via speaker phone from Naples, Fla.

“He was never mad; he was a happy kid,” family friend Sergio Camarava told the court over speaker phone from Miami-Dade County, Fla. “He was always really respectful, always a good kid.”

Hernandez Perez’s mother, Carmen Perez, who sat in the gallery directly behind her son, prefaced her testimony with an apology to the dozen Roth family members attending the sentencing.

“There is nothing that justifies an act like that,” she said through a Spanish-language interpreter. “I myself have a daughter, and I put myself in their shoes. From the bottom of my heart, I am sorry.” In his closing summary, prosecutor Capt. Benjamin Koenigsfeld expressed outrage that Hernandez Perez “spent 25 seconds apologizing to this family” while using the next 30 minutes to talk about himself and how he expects to make the best of prison life.

“From January to today, he hasn’t shown one ounce of remorse,” Koenigsfeld said. “He’s not sad at all for what he put these people through.”

Hernandez Perez will receive 244 days toward his sentence for time served in pre-trial confinement. He will be eligible for parole after 10 years.