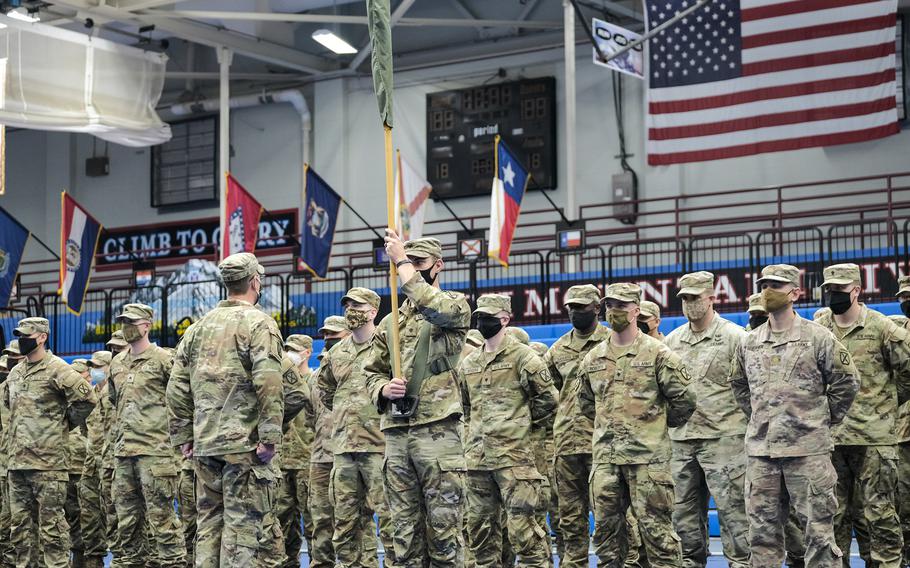 FORT DRUM, N.Y. (Tribune News Service) — The sign that 4-year-old Hunter Topham held on Monday afternoon said exactly what he wanted to do with his father now that he's home from a 9-month deployment in Afghanistan.

And the Fort Drum soldier better be ready for lots of playtime with the toddler and his little brother Logan.

The staff sergeant joined some of the last 10th Mountain Division soldiers to come home from Afghanistan after many deployments during the past 20 years of America's longest war.

On Monday, family members and friends welcomed home about 140 soldiers with the 4th Battalion, 31st Infantry Regiment, 2nd Brigade Combat Team, during the ceremony in the McGrath Sports Complex.

Their plane touched down at Wheeler-Sack Army Airfield at about 3 p.m. Before going to finally see their family and friends, the soldiers had to be processed, check their weaponry and complete other paperwork at the Rapid Deployment Facility.

They then boarded three buses that took them over for a short ride to the gym, where about 200 family members and friends crowded some bleachers.

It was a historic occasion because the group of soldiers — known as the "Polar Bears" — protected the Kabul airport during the tumultus evacuation of more than 120,000 people who left the country fleeing the Taliban.

After they marched into the gym, Maj. Gen. Milford H. Beagle Jr. called the soldiers heroes, emphasizing that all of the Polar Bears returned home safely.

"You did everything that your nation asked of you," Gen. Beagle said.

They helped so many people escape during those waning days after the U.S. military withdrew its forces, leaving about 5,600 Fort Drum soldiers, U.S. Marines and members of the Air Force to complete the excavation efforts.

Before the homecoming ceremony, Lt. Col. Christopher Rowe, commander of the 4-31, told reporters about the experiences that his soldiers faced after the Afghan government and its military collapsed.

His soldiers were mainly assigned to provide security at the North Gate of the Kabul airport after some of them also evacuated the staff of the U.S. embassy.

While at the Kabul airport, some of those soldiers had direct contact with the Taliban, describing it as a "very surreal" experience, Lt. Col. Rowe said.

The two armies had fought against each other for so many years and then the Taliban fighters were there facilitating Americans and others to the gate so they could leave the country.

That first contact, he said, turned into a bit of a staring contest between the two enemies.

At times, the 10th Mountain soldiers had to leave the confines of the airport to go "on side missions" and venture out about 500 meters to get people unable to get to the gate on their own.

While the war has ended, Lt. Col. Rowe said it almost feels like that they will be headed back for another deployment. It's a bit hard to comprehend that Fort Drum's involvement is over, he admitted.

The soldiers helped many people through the gate and got them on C-17 cargo planes to leave the country, Capt. Swasey Brown said. On that first night after the government fell, they saved about 400 people, some from the Japan and Indian embassies, he said.

"That was definitely a crazy day," he recalled.

But the soldiers have now returned home.

Capt. Brown's wife, Jena, two-year-old daughter Sadie, and the newest member of the family, 3-month-old son, Quentin, were waiting for him to walk through that gymnasium door to welcome him home.

"This is the first time I'm seeing him," he said.

Mariah Warren pointed out how her husband spent those final days in Afghanistan helping people at the airport, while Mrs. Topham's husband got people from the U.S. Embassy to the airport.

Sgt. Topham promised his 6-year-old son they would play trains with each other as soon as they got home.

"Are you ready? Are you ready to take Daddy home?" his wife said before the family headed for their car.

The 10th Mountain Division Public Affairs office said that the 140 soldiers who returned home on Monday are not the last. An undeterminable number are still in Qatar waiting for their deployments to end.