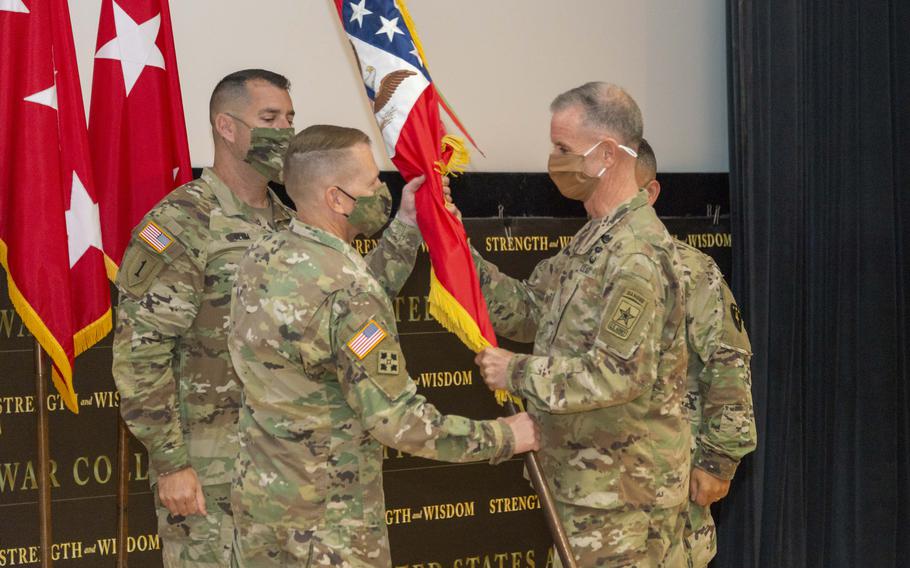 During a ceremony Tuesday, Hill took over command from Maj. Gen. Stephen J. Maranian, who first assumed the duties of Army War College commandant in July 2020.

A certified project management professional, Hill comes to the Army War College from his immediate prior assignments as the deputy chief of engineers and deputy commanding general of the U.S. Army Corps of Engineers. His prior operational assignments include Operation Desert Shield/Desert Storm, Operation Joint Endeavor and Operation Iraqi Freedom.

A Massachusetts native, Maranian was commissioned a second lieutenant in the field artillery from Bucknell University in Lewisburg in 1988.

Maranian was reinstated as commandant of the Carlisle Barracks and U.S. Army War College in July after the Army announced that an investigation determined no probable cause existed to support an allegation that he committed an offense of abusive sexual conduct prior to assuming command of the War College.

Maranian was suspended in February — seven months after taking over as commandant in July 2020 during a change-of-command ceremony for outgoing commandant Maj. Gen. John Kem.

There were media reports in February that the allegation being investigated by the Army did not occur at the Carlisle post nor was it related to Maranian's position as commandant of Carlisle Barracks or U.S. Army War College.

During the investigation, Hill served as acting commandant of Carlisle Barracks and War College. Before that appointment, Hill was deputy commander of the Army Corps of Engineers.

Prior to coming to Carlisle, Maranian served as the deputy commanding general of education at the U.S. Army Combined Arms Center. He was also provost of the Army University and deputy commandant of the Army Command and General Staff College at Fort Leavenworth, Kansas.