‘Rocking the foundation of our unit’: Soldier dies in Alaska hunting accident 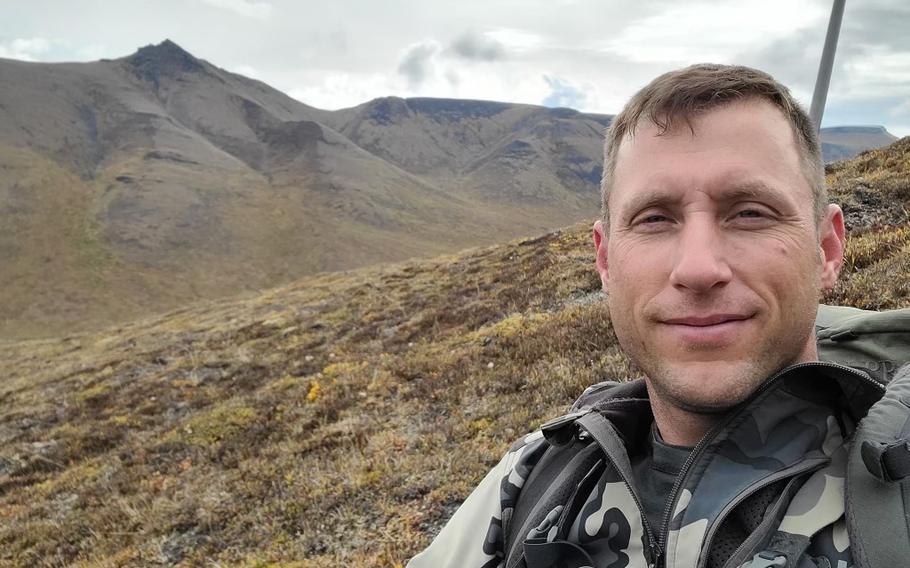 Sgt. 1st Class David Frederick White, a 40-year-old combat veteran and Purple Heart Medal recipient, was found dead Saturday in Wrangell-St. Elias National Park and Preserve. Searchers who found his body believe he attempted to cross a creek, but was swept away by the current. (Photo provided by Joint Base Elmendorf-Richardson)

An Army noncommissioned officer and Purple Heart recipient assigned to Fort Wainwright, Alaska, was found dead in a nature preserve Saturday after he was reported overdue from a hunting trip, according to officials at Joint Base Elmendorf-Richardson.

Sgt. 1st Class David Frederick White, 40, served as an explosive ordnance disposal specialist with the 65th Explosive Ordnance Disposal Company, according to base officials. He was a 19-year Army veteran who deployed four times to the wars in Iraq and Afghanistan.

“The loss of Sgt. 1st Class White came as a shock, jarring the heartbeats of everyone and rocking the foundation of our unit,” said Capt. Joshua Johnson, 65th EOD Company commander. “We send our deepest sympathies and condolences to his family and friends, especially his son, and hope that we can all look back at the many memories and wonderful examples of how he has impacted all of our lives to partially fill the holes left by his passing."

Before setting out on the trip to Wrangell-St. Elias National Park and Preserve, White agreed to check in with a friend periodically, the base said. However, White stopped communicating after an Aug. 12 check-in, causing the friend to become concerned. They contacted the National Park Service on Aug. 16, according to the park service.

A search began the following day with Alaska wildlife troopers assisting park rangers. By Aug. 20, White was considered “officially overdue” by the park service, which then began using helicopters and fixed-wing aircraft to assist in search efforts. Meanwhile ground teams continued to look for signs of White.

A team searching waterways found White’s body at about 2:30 p.m. Saturday on the banks of Jacksina Creek, officials said. White’s final communication stated he intended to cross the creek and officials believe he got swept away by the current, according to the park service.

His body was sent to the Alaska State Medical Examiner’s Office, according to the park service.

White of Tallulah, La., joined the Army in 2002 and served at Fort Irwin, Calif., Redstone Arsenal, Ala., Fort Drum, N.Y., Fort Knox, Ky., and Fort A.P. Hill, Va., before reporting to Alaska in July 2017, according to Joint Base Elmendorf-Richardson officials. He deployed three times to Iraq and once to Afghanistan for a total of 48 months in combat.