Fort Bragg needs boots for memorial display, All American Week to be held this month 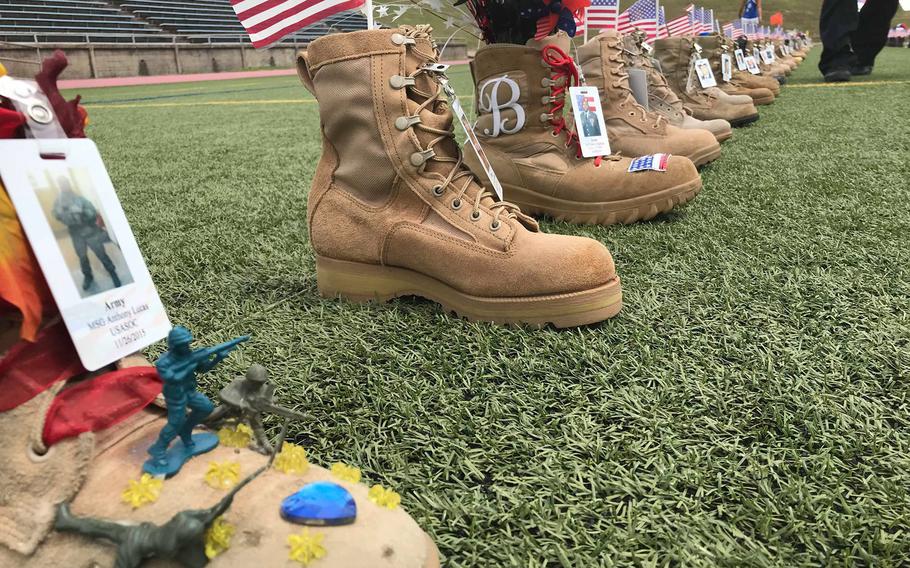 Boots at displayed during All American Week at Fort Bragg in August, 2019. (U.S. Army)

FORT BRAGG (Tribune News Service) — As the 82nd Airborne Division is finalizing its plans for All American Week, Fort Bragg officials are seeking boots for a memorial display.

The boots are set up Hedrick Stadium each year and usually coincide with All American Week and Memorial Day.

All American Week, which is traditionally held in May to celebrate the 82nd Airborne Division’s history, was canceled last year because of the COVID-19 pandemic. This year’s event will be at the end of August.

According to a news release, the boot memorial will coincide with the “Run, Honor, Remember 5K” memorial run Aug. 28, and the 82nd Airborne Division’s All American run on Aug. 30.

Fort Bragg officials put out a request on social media seeking boots for the memorial.

The boot memorial display started in May 2014 to honor “the legacy of those who have paid the ultimate sacrifice since 9/11,” a Fort Bragg news release stated.

The display will start Aug. 27 and remain on the field until Aug. 3.

Volunteers carefully prepare each individual boot with an American flag and an identification tag of a service member who has died since Sept. 11, 2001, said Charlotte Watson, Survivor Outreach Services coordinator.

“It takes about 7,500 boots to be placed across the field at Hedrick Stadium,” Watson said in the news release.

Weather in prior years have damaged about 4,600 boots, which is why more than 1,000 military-type boots in good condition are needed, Watson said.

Boots can be dropped off at the following locations at Fort Bragg by Aug. 13:

According to an All American Week schedule, this year’s event begins Aug. 30 and runs until Sept. 2.

The week starts with the division run early in the morning of Aug. 30.

The Hall of Fame induction ceremony, which honors paratroopers who have served throughout the division’s history, is 10 a.m. Sept. 1

An 11 a.m. memorial ceremony to honor the lives of fallen paratroopers during the past year will follow the same day.

Competitions such as tug-of-war and tactical games, will be scheduled throughout the week, along with dinner and lunch events for veteran paratroopers.

Officials with the 82nd Airborne Division Association, which cohosts the events, are asking veterans who plan to attend the dinners and lunches to register online by Aug. 13 before the fee increases.

Times for the airborne review, which is usually held at the end of the week, are still being finalized.

The review is generally open to the public and features static displays, a division jump, tactical, aircraft and fires demonstrations and a veteran’s march.

Though the Department of Defense has issued a directive related to wearing masks indoors because of the surge of the delta variant, a spokesman for the division said Monday that All American Week is still scheduled because most events are held outdoors.

Individuals without Department of Defense identification and civilians who plan on attending the events are encouraged to obtain visitor passes in advance to ensure traffic isn’t backed up at the visitor’s center, said Lt. Col. Brett Lea, a spokesman for the division.

Lea said more information about All American Week will be posted to the division’s social media pages as plans are finalized.