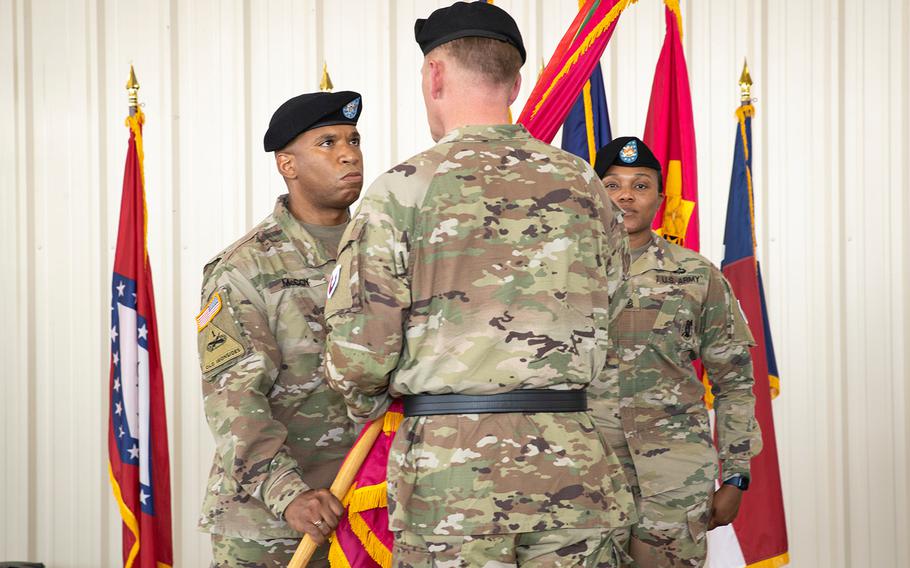 Col. Marvin Walker, who took command of the depot almost exactly two years ago, passed that leadership role on to Col. Eric McCoy, a Maryland native who came equipped with a resume of distinguishing honors to match Walker’s own.

Local government and economic leaders gathered with depot employees beneath the roof of the Nichols Industrial Complex at the depot to watch the exchange, ignoring the sweltering Alabama heat to give Walker a sendoff into retirement.

McCoy introduced himself before the ceremony with warm smiles and handshakes for visitors, but spoke during the ceremony in a booming, forceful voice. He told staff and dignitaries that he would maintain the depot’s success and refine it, as well.

“When it comes down to life and death between you and the enemy and you pull the trigger, the difference between a click and a bang is logistics,” McCoy said.

McCoy, a native of Baltimore, Md., began his career in 1998, working at the Pentagon and overseas after earning degrees in mental health, administration, policy management and strategic studies — a list not including an extensive military education, as well.

Walker, the retiring commander, spoke with a mix of mirth and sincere emotion as he considered his two years at the depot and his 26 years with the U.S. Army, sharing both laughs and tears with the audience.

During his tenure, Walker said, the depot was the Army’s national leader among the 26 depots, arsenals and ammunition plants that comprise its Organic Industrial Base, which manufactures and resets Army equipment.

Walker, a native of Mobile, had said in 2019 that the Anniston depot had been his first choice for his next assignment. The depot capped off a career that took Walker to locales as varied as South Korea, Kuwait, Iraq and Afghanistan, earning numerous medals and promotions.

Walker left his staff with assurances of his faith in his successor.

“You guys could not be in better hands,” Walker said.

Visit The Anniston Star (Anniston, Ala.) at www.annistonstar.com