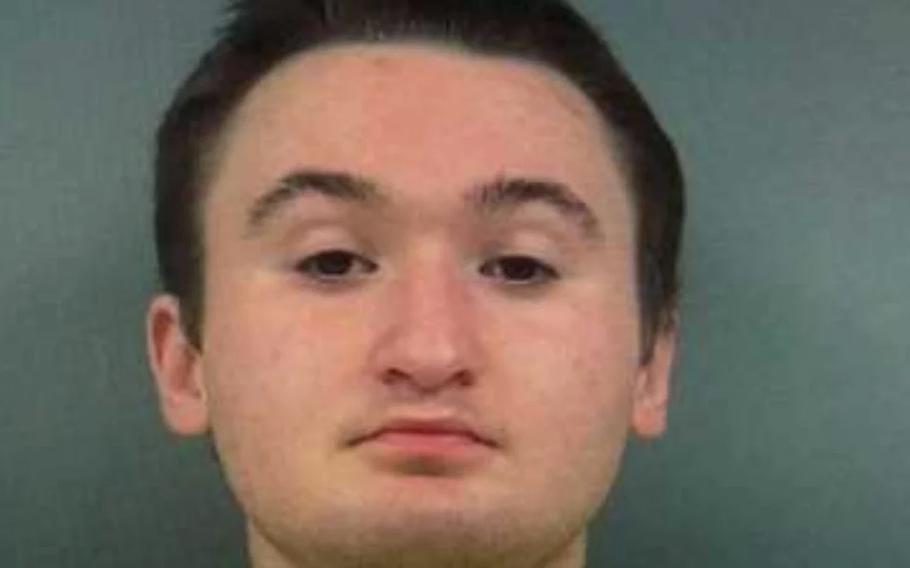 Tres Genco, who is part of a misogynistic community that advocates violence against women, was arrested Wednesday after federal investigators said he was planning to storm a university and kill thousands of people. (Highland County Sheriff’s Office)

NEW YORK (Tribune News Service) — A former U.S. Army recruit from Ohio who is part of a misogynistic community that advocates violence against women was arrested Wednesday after federal investigators said he was planning to storm a university and kill thousands of people.

Tres Genco, 21, began working on his plot about two years ago after enlisting in the Army and stocking up on weapons and tactical gear, including a machine gun and multiple boxes of ammunition, according to the Justice Department. He eventually chose an identified university as his target and conducted surveillance there in January 2020, authorities said.

But federal agents foiled his plot just months later when they searched his home in Hillsboro and found the arsenal of weapons, a disturbing manifesto stating he would “slaughter” women “out of hatred, jealousy and revenge” and a note saying he hoped to “aim big” for a kill count of 3,000 people, according to prosecutors.

The suspect is a self-identified “incel,” or “involuntary celibate,” which comes from a fringe online movement of predominantly men who harbor anger toward women, the Justice Department said in a news release announcing Genco’s arrest. Incels promote violence in support of their belief that “women unjustly deny them sexual or romantic attention to which they believe they are entitled,” according to the release.

Genco, who now faces federal hate crime charges, maintained profiles on a popular incel website, often posting about his hate for women, authorities said. In one post, he detailed spraying “some foids and couples” with orange juice in a water gun.

“Foids” is an incel term short for “femoids,” which refers to women, and the bizarre orange juice attack relates to a similar incident by “incel hero” Elliot Rodger, the college student who murdered six people and wounded more than two dozen others in a shooting and stabbing attack at UC Santa Barbara in May 2014.

As they reviewed Genco’s electronic devices last year, investigators learned he had searched for sororities and topics including “how to plan a shooting crime” and “when does preparing for a crime become attempt,” according to prosecutors.

In August 2019, Genco allegedly drafted a manifesto titled, “A Hideous Symphony a manifesto written by Tres Genco, the socially exiled Incel," in which he detailed how his plans to join the military would contribute to his violent plans, according to the Justice Department.

“I would hope these words resonate in sweet familiarity to fellow incels, either cognizant of their situation or not,” Genco wrote. “I am already set to go into the U.S. Army… this training will be for the attainment of one reality, the death of what I have been deprived most, but also cherish and fantasize at the opportunity of having but has been neglected of; Women. I will slaughter out of jealousy, hatred, and revenge… I will take away the power of life that they withhold from me, by showing there is more than just happiness and fulfillment, there is all encompassing death, the great equalizer that will bear all of us into its seductively calm velvet of silence and serenity.”

That same month, Genco began Army Basic Training in Georgia. However, he was discharged from the Army in December 2019 for poor performance and conduct, according to the indictment.

In January 2020, Genco allegedly wrote a another document entitled “Isolated” that he described as “the writings of the deluded and homicidal” and signed it as “Your hopeful friend and murderer,” authorities said.

The investigation also showed he had bought a Bowie knife, a skull face mask, tactical gloves, a bulletproof vest, a hoodie featuring the word “revenge,” two Glock 17 magazines and other items he would have used in an eventual attack, the Justice Department said.

Authorities eventually brought the case to a grand jury and the panel agreed to charge Genco with one count of attempting to commit a hate crime involving an attempt to kill and one count of illegally possessing a machine gun. If convicted, he could face up to life in prison.

It was not immediately clear Wednesday if Genco has an attorney.