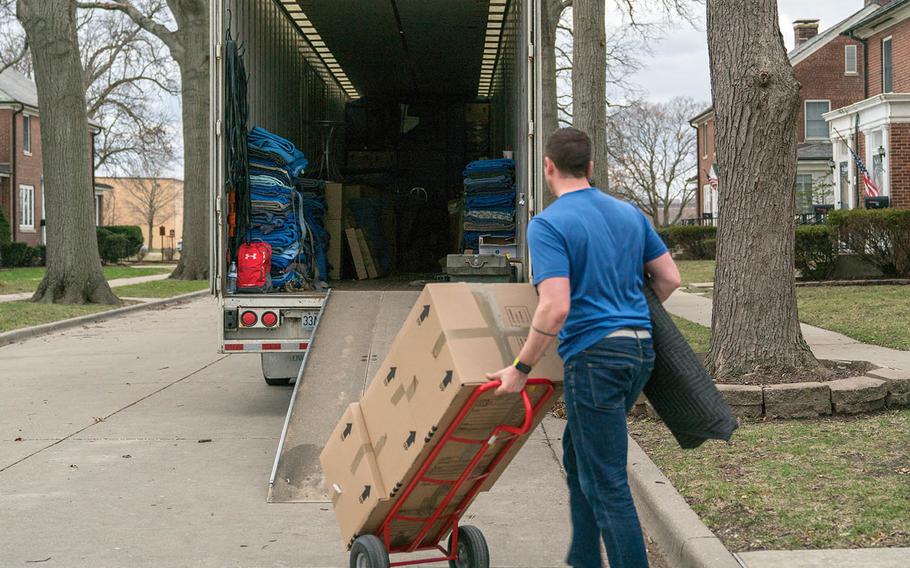 A contractor loads a moving truck with household goods during the permanent change of station move at Scott Air Force Base, Ill., March 7, 2018. (Oz Suguitan/Defense Department)

A shortage of moving personnel and a limited U.S. housing market has helped create obstacles and delays for some of the 54,000 soldiers scheduled to move to new installations during summer, an Army general said Thursday.

The Army reported some 4% of the about 72,000 shipments for permanent change of station moves, known as PCS, that the service had completed since April had been delayed, noting many soldiers use more than one shipment for each move. The delays, at least in part, can be attributed to a coronavirus pandemic-induced shortage of truck drivers and packers, said Army Maj. Gen. Omar Jones, the deputy commanding general for Army Installations Management Command.

“PCSes are hard. Those are one of the most challenging pieces of military life — all the stresses associated with moving whether it’s across the country or across the world,” said Jones, who completed a PCS this month from the Washington, D.C., region to IMCOM headquarters at Fort Sam Houston, Texas. It was his 15th military move. “This year is especially hard … with the unique challenges … as we are not out yet of this pandemic.”

Jones said Joint Base Lewis-McChord in the state of Washington has been the hardest hit by serious PCS-related issues. He cited especially a lack of available movers in the area and a shortage of available off-post rental properties and homes for sale. Similar issues have plagued soldiers moving to and from Fort Drum, N.Y, Fort Knox, Ky., and Fort Irwin, Calif., he said.

The general said top Army leaders are working to solve the problems and smooth the moving process for its troops. He also said top Army and Pentagon leaders had recently signed off changes meant to aid troops with the moves during summer.

Those changes include allowing a flexible reporting date for soldiers scheduled to arrive at a new installation between July 6 and Sept. 30. Jones said soldiers can check in with their units as early as 30 days before their scheduled report date or 20 days later to help them avert moving challenges.

The Pentagon has also reached an agreement with IHG Army Hotels, which runs on-post hotels in partnership with the private military housing company, Lendlease, to allow soldiers who cannot immediately find permanent housing to stay in their hotels at their Basic Allowance for Housing rate, Defense Department and hotel officials said this week. That rate is far less expensive than the typical per diem rate on-post hotels charge per night, the officials said.

Troops moving this summer can also receive a 100% reimbursement for self-moves, which had been reimbursed at a 95% rate since 1998, the Army announced in March. To date, about 13,000 soldiers have conducted self-moves, officially known as personally procured moves, Jones said. That rate, about 25% of soldier moves to date, is on par with recent years. Last year, about 23% of soldiers moved themselves up from about 21% in 2019 and 2018, Army officials said in March.

Jones said he was not surprised more soldiers are forgoing moving themselves even amidst a slowed process through the traditional military PCS program. But he said it is important soldiers know they have the option and their expenses would be entirely covered, if they choose it.

“As much of an incentive as the financial piece is, it's also a lot of work,” he said. “So, each family, each soldier, has to make that calculus, that decision for themselves.

“No family should ever feel like they have to do a personally procured move, [or] have to buy a home, or have to live off-post if what they really want to do is live on the installation. … There are tools and resources out there to help [soldiers] solve these problems.”

Meanwhile, Jones said the Army is informally studying its PCS moves to determine whether soldiers are moving too often, considering the stresses of those moves.

Senior leaders, the general said, are examining whether soldiers need to move as often as they do. Jones did not predict when the service might reach a conclusion on the issue.

“Could we move less frequently and still meet our requirements, given where technology is today and those kinds of things? I don't think there's an answer yet,” he said. “But as the Army looks … to make sure that we're taking care of our people both today and in the future, that is one of the things being considered … by our leadership — trying to find that right balance for both the Army, and for our folks.”