‘It’s a really cool way to close out your time on Fort Bragg’: Father and son jump together 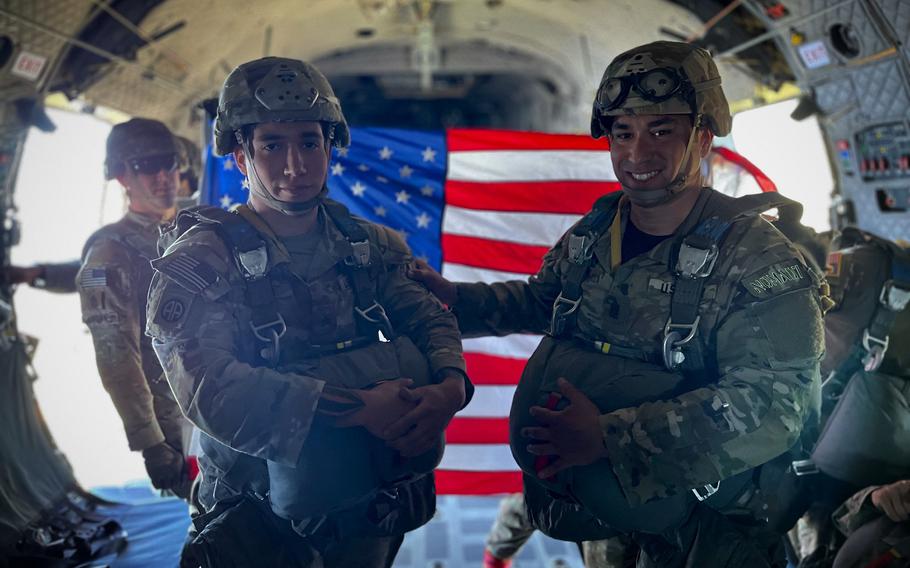 Sgt. Maj. Towns, who is in his early 40s, was assigned to the 3rd Special Forces Group Support Battalion.

His son, who is in his 20s, is part of the 2nd Battalion, 501st Parachute Infantry Regiment, 1st Brigade Combat Team, 82nd Airborne Division.

The jump was right before Father’s Day weekend on the St. Mere Eglise drop zone.

Command Sgt. Maj. Towns conducted the jumpmaster personal inspection for his son, who was the first jumper out of the C-27 aircraft.

“I watched him get out and was like holy (expletive) that just happened,” Command Sgt. Maj. Towns said. “He was gone, and when I saw him again, he was on the ground. It was a pretty cool feeling to walk it in with the kid.”

Sgt. Maj. Towns, who is originally from Mount Pleasant, Texas, enlisted in the Army in June 1998.

His uncle, who was in the infantry at Fort Benning, Ga., inspired him to want to become a soldier after high school.

In 2000, he encountered a group of Rangers overseas and decided to switch his military occupation specialty.

“I thought I needed to be with them, and they looked like they had their stuff together, and in order to do that, I had to go to airborne school,” Command Sgt. Maj. Towns said.

Jumping into Father's Day weekend, literally. Had the honor and privilege to send my son out of an aircraft. Big thanks @82ndABNDiv @KleisnerTeddy for helping make this happen. #FathersDay2021 #Airborne #paratrooper @1st_SF_Command @16thSMA @3rdSFGroup pic.twitter.com/c0Svfm2iEG

“He would always go to work with me whenever the opportunity arose, and I think it was about his freshman year when he made up his mind to go toward the military,” Command Sgt. Maj. Towns said. “Then, he obviously enlisted just liked I did out of high school, and I told him if you’re going to join, you should go all the way and go airborne and experience being an airborne infantryman and hopefully get your Ranger tab.”

“It was definitely to follow after him,” Sgt. Towns said. “I looked up to him and everything he did, and kind of wanted to be like him in a way, so I joined as soon as I could to try to follow in his footsteps.”

Although Command Sgt Maj. Towns is aware there are a select number of airborne installations in the Army, he didn’t consider his Army career path crossing with his son’s.

“I wanted to go somewhere else simply because I wanted him to live his life without having his father nearby,” Command Sgt. Maj. Towns said. “I wanted to give him his own personal space.”

Sgt. Towns arrived at Fort Bragg before his father, in summer 2017.

His father arrived in September 2019.

“I thought it was hilarious,” Sgt. Towns said of learning that his father would be at the same duty station. “It was even funnier, because my mom was stationed here. So, when she left, he immediately showed up, and it was like I couldn’t get away from my parents.”

After learning he’d receive his next assignment to Mississippi, Command Sgt. Maj. Towns wanted to take advantage of being at the same installation as his son while they are both on active airborne status.

He spoke to his own leadership and his son’s leadership to get the green light.

Leadership identified when one of the battalions was conducting a routine jump and allowed Command Sgt. Maj. Towns to get his own chalk — group of paratroopers — to be a jumpmaster for the aircraft his son was aboard.

Sgt. Towns said he was on board when his dad asked him about the jump because he knew it was important to his father.

“He was the jumpmaster for our door, so it was pretty cool, and I knew he was going to be meticulous,” Sgt. Towns said.

Sgt. Maj. Towns said it was somewhat daunting because it was the first time his son used an MC-6 parachute that maneuvers differently from the T-11 parachute his son normally uses.

He had flashbacks of becoming injured the first time he used the same chute.

The father and son each landed smoothly.

It was one of the many countless jumps for the elder Towns and No. 15 for his son, but it will be one of the most memorable for both, they said.

“We were both pretty excited,” Sgt. Towns said. “He landed a little further away from me and was laughing because I guess he’s used to running, and I walk it off on the drop zone. But it was a good time. We had some laughs and talked about the jump.”

Sgt. Maj. Towns, who just arrived for his new assignment with the 2nd Battalion, 410th Brigade Support Battalion at Camp Shelby, Mississippi this past week, said it was likely the last jump of his Army career.

“There probably won’t be any airborne units when I become available to become a brigade command sergeant major, so this most likely was my last hoorah as a paratrooper,” he said. “It’s a really cool way to close out your time on Fort Bragg.”