FORT DETRICK, Md. (Tribune News Service) — Col. Dexter Nunnally stood at attention on the glossy floor of Fort Detrick’s auditorium Thursday morning, his back nearly as straight as the flag pole he clutched in his two hands.

After two years of service, this was the last act Nunnally would take as commander for the U.S. Army Garrison on the military base. With a small smile, he passed the gold and red flag of the garrison to Davis Tindoll Jr. — director of the U.S. Army Installation Management Command Sustainment — who in turn handed it to Col. Danford Bryant II.

Just like that, with the completion of a 246-year-old ceremony, Bryant took charge of the fort’s garrison. He grinned broadly as he passed its colors to Command Sgt. Major Jason Gusman — his first action as the base’s commander.

“You got an awesome team that includes the garrison, all of the mission partners, the families on the installation, the veterans and the retirees in the community,” Nunnally told his successor. “Take care of them like family, and they will take care of you.”

Before joining the Army, Bryant was enlisted in the U.S. Navy from 1988 to 1993 and was deployed in support of Operations Prime Chance, Earnest Will and Desert Storm. His first Army post came five years later when he was assigned as a chemical officer to the 7th Chemical Company at Fort Polk, Louisiana. He later served with the 319th Airborne Field Artillery Regiment, 82nd Airborne Division at Fort Bragg, North Carolina.

The incoming commander kept his remarks short Thursday, expressing his gratitude to Nunnally and everyone who has so far helped him and his wife acclimate to life on the base.

“Thank you all for your dedication and professionalism. And if I haven’t met you yet, I will soon,” Bryant said, smiling as he added, “You’re going to get very tired of seeing me, probably.”

At the start of the ceremony, Tindoll extolled what Nunnally and his team had accomplished during the outgoing commander’s tenure. Over the past two years, Tindoll said, Nunnally led the garrison through an onslaught of challenges, including the coronavirus pandemic and budget cuts. Through it all, Tindoll added, the commander remained committed to transparency.

In doing so, Nunnally enhanced trust between the garrison and those who live on the base, Tindoll said.

“Ladies and gentlemen, I contend that the integration and synchronization of 57 base office services is a difficult task,” Tindoll said. “ Col. Nunnally has made this complex challenge appear routine.”

Before shaking Bryant’s hand, Tindoll pulled Nunnally in for a hug. Then, the outgoing commander took his turn at the podium, looking out at the crowd seated before him. Two years ago, shortly after assuming command of the garrison from Col. Scott Halter, Nunnally remembers realizing that he had no idea what he was doing. The Army had trained him how to lead, but not how to steer garrison operations. He felt like he was a brand new second lieutenant all over again.

“And now, after two years, I can honestly say I still don’t know what I was doing,” he said, making the audience laugh. “But I had a great team that kept me out of trouble.”

The members of the garrison are rock stars, Nunnally said. Every two years, they have to weather the turbulence that comes with a new commander — and they have to hope the fresh face won’t come in and “mess things up.”

Earlier this year, Nunnally’s team was further tested when a Navy Hospital Corpsman stationed at the military base reportedly shot two naval sailors while they were working inside a government-leased military warehouse at a Frederick business park. After the shooting, police say the gunman drove to Fort Detrick, where he was shot dead by the military base’s civilian police force about half a mile from the Nallin Farm Gate.

That day, law enforcement in Frederick and on the base worked seamlessly with the FBI and other local agencies to minimize casualties and protect the community, Nunnally said, perfectly exemplifying the close relationship Fort Detrick has with the surrounding city. 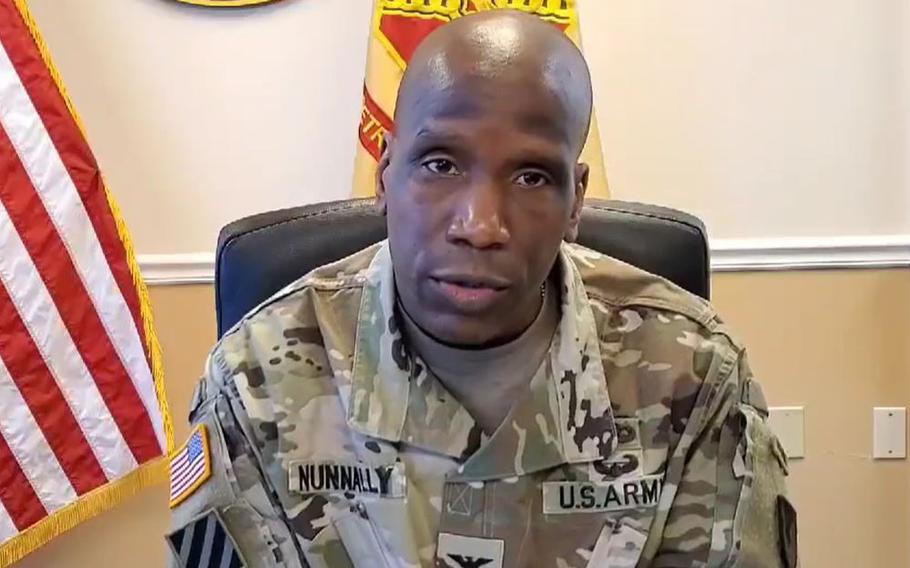