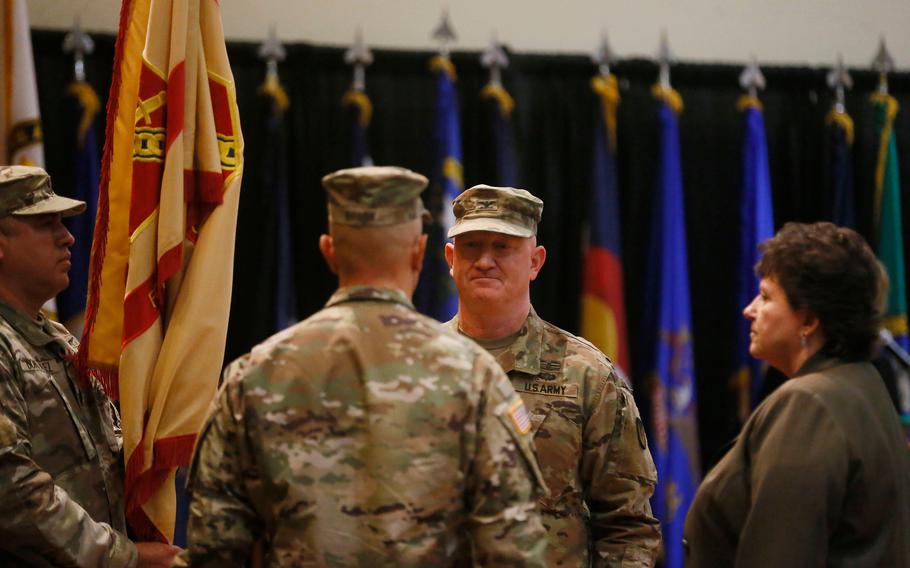 Brady took over command from Col. Stuart James in a ceremony Thursday at the Centennial Banquet and Conference Center on base.

Fort Bliss is not new to Brady. He served at the installation after he enlisted in the U.S. Army Reserves in 1992. He entered the U.S. Military Academy a year later and graduated in 1997.

“I know many things have changed over the years,” Brady said during the ceremony. “However, the great qualities of this region remain the same, and that is the people and the culture,”

James, who was garrison commander for two years, said his relinquishment of command ends nine years of service with the 1st Armored Division out of Fort Bliss —nicknamed “Old Ironsides.”

Before the change of command, James received the Legion of Merit award in recognition of his service.

James, who is being assigned to a leadership position in Pennsylvania, was commended by Major Gen. Sean Bernabe, Commanding General 1st Armored Division at Fort Bliss; and Brenda Lee McCullough, director of U.S. Army Installation Management Command Directorate-Readiness; for his response to and navigation of the COVID-19 pandemic.

Other attendees at the change in command ceremony included Brady’s and James’ families. Brigadier Gen. Eric Little, who took over White Sands Missile Range earlier this year, was also in attendance.

Brady, a graduate of Mayfield High School, is moving back to the Southwest after most recently serving as the director of operations for the XVIII Airborne Corps at Fort Bragg, North Carolina.

“I really can’t wait to work with this great team to improve the strong foundation that already exists,” Brady said during the ceremony. “I intend to maintain a high level of trust throughout my tenure.”

Brady is the son of retired Col. Ed Brady of Las Cruces and is father to Edward Thomas Brady, who received an appointment to the U.S. Military Academy earlier this year.