Army to upgrade 60 medals for ‘Black Hawk Down’ soldiers 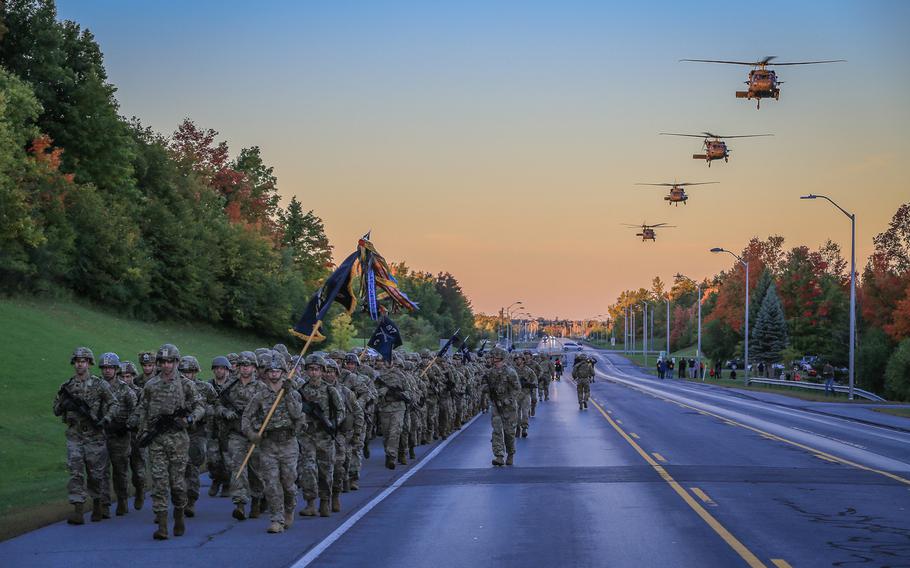 Current and former members of 2nd Battalion, 14th Infantry Regiment, 2nd Brigade Combat Team, 10th Mountain Division gather at Fort Drum, N.Y., in October 2018 to commemorate the participation of the 10th Mountain Division in the Battle of Mogadishu. The Army announced on Friday, July 2, 2021, that 60 soldiers who fought in the battle will receive upgraded awards. (Matthew Pargett/U.S. Army)

Sixty American soldiers who fought in the infamous Battle of Mogadishu will receive upgraded awards later this year for their valorous efforts 28 years ago in the brutal running battle through the streets of Somalia’s capital, the Army announced.

Army Special Operations Command officials will award 58 Silver Stars and two Distinguished Flying Crosses to soldiers who fought in that hourslong battle. The decision to upgrade the medals follows a review of awards ordered in 2020 by former Army Secretary Ryan McCarthy, service officials said Friday. The Oct. 3, 1993, battle was immortalized in Mark Bowden’s best-selling 1999 book “Black Hawk Down” and its 2001 adaptation to film by director Ridley Scott.

The recipients of the awards will receive their upgraded medals in ceremonies hosted by the units that they were assigned to at the time of the battle, said Bonita Riddley, a USASOC spokeswoman. Riddley declined to provide the names of the soldiers whose awards will be upgraded or the units in which they served.

“We are not releasing any specifics as there are still many particulars to be worked through as well,” she said Friday.

Eighteen American troops died in the ensuing 18-hour battle, including three of the four pilots in the downed Black Hawk. The fourth pilot was captured and later released. Two Delta Force operators — Master Sgt. Gary Gordon and Sgt. 1st Class Randy Shughart — were posthumously awarded the Medal of Honor for their actions to secure the site of one of the Black Hawk crashes to recover survivors.

Both operators died in the battle.

In all, 73 U.S. troops were injured in the fight, according to the Army. The botched mission left a long-lasting mark on American foreign policy after television news broadcast images of an American soldier’s body dragged through Mogadishu’s streets as locals cheered.

The defense secretary at the time, Les Aspin, would resign his post in wake of the battle. Ultimately, former President Bill Clinton elected to end the mission to capture Aidid, called Operation Gothic Serpent, and he removed all U.S. forces from Somalia by March 1994. U.S. troops would not return to the country until 2007.

The Silver Star is the third-highest award for battlefield heroics. The Distinguished Flying Cross recognizes heroism or extraordinary achievement while participating in aerial flight.

Riddley did not say Friday when the Army expects to conduct the ceremonies to award the upgraded medals.