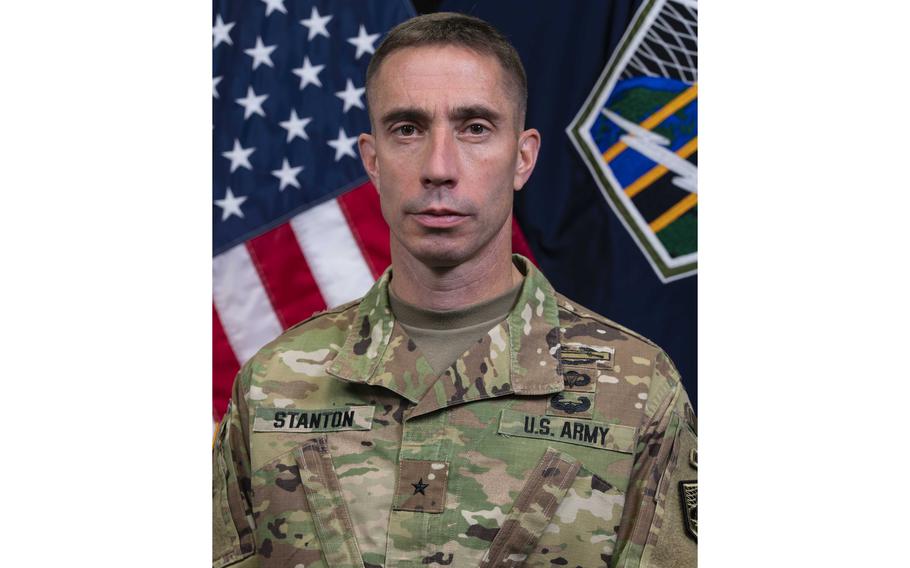 FORT GORDON, Ga. (Tribune News Service) — Brig. Gen. Paul T. Stanton is ready to step into his new role as commander of Fort Gordon and the Cyber Center of Excellence.

"Emotionally I don't know that I could be more charged than I am currently," he said just after the ceremony. "I've had the chills all week, but I had the chills this morning especially, even fighting through the heat and humidity here on Barton Field."

"The Army chose the right leader at the right time," Hersey said in his remarks during the ceremony.

Hersey outlined some of the future of Fort Gordon, including new classrooms and labs for training soldiers in the future of cyber.

"From my perspective Fort Gordon is a leader for positive change now and in the future," Hersey said. "As the Army codifies its role in multi-domain operations, Fort Gordon will play a significant operational and institutional role in developing the information component of that."

Stanton said he is happy he is able to continue working with Hersey.

"Maj. Gen. Hersey and his wife, Dr. Kathy Hersey have done a fantastic job with the installation and the Cyber Center of excellence," Stanton said. "I have an easy shoulder to lean on. Maj. Gen. Hersey and I have known each other for a while, I know exactly where his office is because I just vacated it."

Lt. Gen. Theodore D. Martin, commanding general of the Army Combined Arms Center and Fort Leavenworth, also participated in the handoff ceremony. He particularly praised Hersey and his team for their leadership during the pandemic.

"This Army did not miss one beat," he said. "The job that was done by the leaders at Fort Gordon, Cyber Center of Excellence, has not been matched by our entire Army."

Stanton's first priority as the new commander is making sure that soldiers are receiving training in cyber security that matches evolving threats.

"The biggest thing is insuring we retain the connectivity between current operations and what we teach in the schools, because things do change very, very rapidly, we can't develop curriculum and let it stagnate for five years," he said. "That won't work in our domain."

Fort Gordon is uniquely suited to do that, according to Stanton.

"Our mission at the Cyber Center for Excellence is to educate and train our soldiers," he said. "Fort Gordon is a fantastic place for us to do that because not only do we train here but we execute the mission here."

Part of keeping up to date on the curriculum also includes working with other organizations — other service branches, the National Security Agency, and civilian organizations, according to Stanton.

"We have to stay current," Stanton said. "We can't do that by ourselves. That requires very strong partnerships."

Those partnerships include institutions outside the government, including academic and industry across the region.