The two new leaders are now at the helm of Northeastern Pennsylvania’s largest industrial employer.

The ceremony, which culminated with a passing of Tobyhanna’s flag, was presided over by Maj. Gen. Mitchell Kilgo, Commanding General of the U.S. Army Communications-Electronics Command. Depot employees, representatives of state and local government, and family members witnessed the event.

McDonald’s next assignment is with the Joint Staff Operations Directorate at the Pentagon. In his parting remarks, he promised to never forget his time at Tobyhanna Army Depot.

“My assignment here at Tobyhanna has been, without a doubt, the best and most broadening I have experienced in my career,” McDonald said. “I will take and share the Tobyhanna legacy with anyone who will listen.”

Horn earned a Bachelor of Science in Business from Pacific Lutheran University in Tacoma, Wash. Horn also has Masters of Science degrees in Supply Chain Management from Kansas, and Strategic Studies from Army War College. 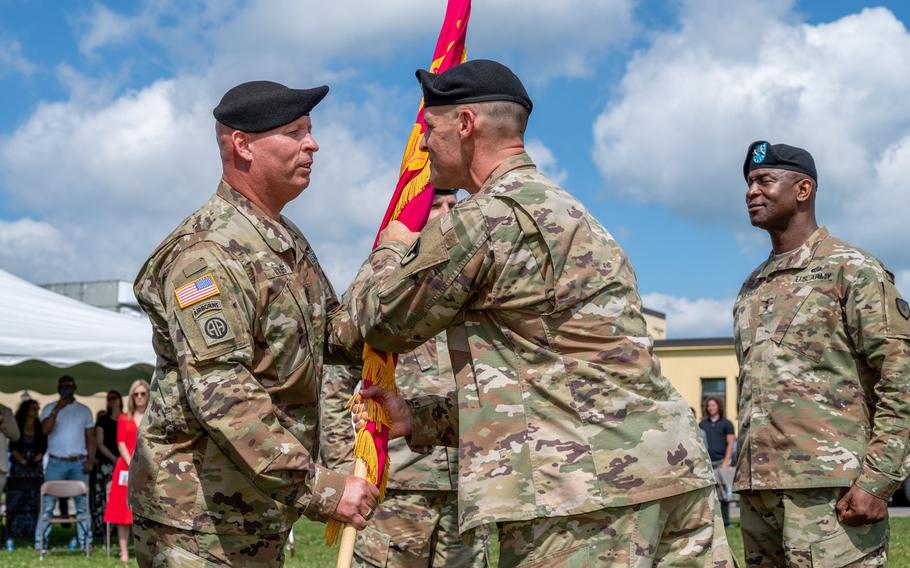 Wiles is the depot’s 21st sergeant major. His most recent assignment was as the chief mechanical operations sergeant major for the 3rd Infantry Division at Fort Stewart, Ga. He has served in staff and leadership positions at stateside and overseas military installations including the Republic of South Korea; Fort Bragg, N.C.; Fort Hood, Texas, and Fort Lee, Va.

As sergeant major, Wiles serves as the voice of the warfighters who use equipment repaired by the depot. He advises the commander on all matters relating to Soldiers, the civilian workforce and their family members.

In his first address as depot commander, Horn expressed his excitement at joining Team Tobyhanna.

“When I learned that commanding Tobyhanna Army Depot was my next assignment, I was elated that I’d be leading such a skilled and dedicated workforce,” Col. Horn said, “You have a reputation for strategic planning and innovation.”

Horn added that he holds the mission of Tobyhanna close to his heart.

“As Army civilians, you have what many other people do not — a sacred purpose behind your work,” Col. Horn said. “What you do matters. You matter. Like any job, there will be good days and frustrating days. But when you get home at night, I hope you’ll remember that your work helps our warfighters keep America safe. And I hope you’ll be as proud of that as I am.”

About 3,700 personnel are employed at Tobyhanna, which is located in the Pocono Mountains of northeastern Pennsylvania. Tobyhanna Army Depot is part of the U.S. Army Communications-Electronics Command. Headquartered at Aberdeen Proving Ground, Maryland, the command’s mission is to empower the Soldier with winning C5ISR capabilities.