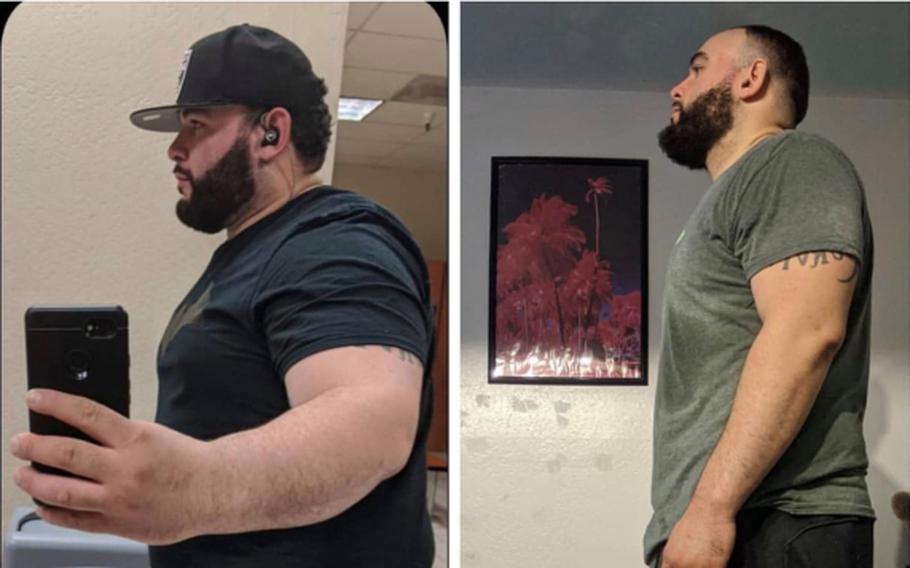 VALLEJO, Calif. (Tribune News Service) —Aaron Stevenson could feel it walking up stairs, getting out of bed, or merely breathing. He couldn’t bend down and touch his toes.

He was overweight. He knew it.

If he was 6-foot-4, those 350 pounds wouldn’t have anchored him to the bottom of misery ocean.

“I would have been able to carry it,” Stevenson said.

But, at 5-foot-9, merely walking became tough. If there were stairs to be had, “I’d probably look for the elevator,” he said.

Stevenson was king of the casserole while conquering the triglyceride trio of soda, candy and ice cream. Local fast-food eateries practically knew Stevenson by his first name.

“I was eating everything. I let myself go a little bit,” he understated. “I was eating out three times a day.”

But it didn’t stop the 32-year-old from pursuing his dream of joining the military, following in the genetic footsteps of many. However, when he told the recruiter via phone call of his size, “he would tell me I was too big,” Stevenson said. “They wouldn’t give me a chance. Some wouldn’t even return my calls.”

Stevenson wouldn’t surrender. And, inspired by his son’s birth two years ago and motivated to change by the death of a heavy-set 30-year-old best friend, Stevenson started working out, and watching his consumption. He dropped down to 285 pounds — and found a sympathetic ear in Staff Sgt. Andrew Romano, a Vallejo-based California Army National Guard recruiter.

“He gave me advice and encouragement to ‘keep it going.’ Just to have someone believe I could do it and someone who would give me the opportunity is all I needed,” Stevenson said.

On Monday, Stevenson was officially sworn into the California Army National Guard. He will be a Motor Transport Operator for the 2632nd Transportation Company in Sacramento after he completes Basic Training and Advanced Individual Training at Fort Leonard Wood in the Missouri Ozarks.

Stevenson will help with natural disasters, wildfires, floods, earthquakes and other major events that the Guard is called upon for, Romano said.

“I’ve worked this job for a long time and it is extremely rare to see someone accomplish the amazing feat that he has,” said Romano. “His drive and determination are truly awe-inspiring.”

When Stevenson signed his six-year Guard commitment, “it was an amazing feeling,” he said by phone Thursday. “I felt so proud, so honored to have the opportunity to serve my country, my community, my state. It’s one of the best feelings I’ve had in my life.”

“Everyone should be inspired by Aaron Stevenson’s story because it mimics the recipe found in our most-loved inspirational fables and movies,” Aliga said. “He’s had to first fight through various adversities — losing a friend, his commitment to lose weight — just so he can start on his goal to serve our community via the National Guard.”

McConnell, a Vietnam veteran, said that “Vallejo is privileged to have among our residents giving and motivated individuals such as Aaron Stevenson.”

“He was willing to work with me,” said Stevenson, adding that “there’s still work to be done” after losing 130 pounds.

“Grinding is the beautiful part of the journey,” said Stevenson, a 14-year butcher at Safeway.

Yes, said Stevenson, when his best friend of 20 years died a few years ago, “that was big. It was a changing point in my life. We did everything together. He was on the bigger side and had a heart attack. It was eye-opening for me, that I had to make some changes.”

Stevenson wished his friend was alive to see him sworn in as a member of the California Army National Guard.

“He would be so happy for me,” Stevenson said.

Reaching the destination was far from easy, he said. There were 5 a.m. workouts. And eating right. And working eight hours a day while raising his son with his fiancé.

“It was mentally taxing,” Stevenson said.

When he finally signed the papers as a member of the California Army National Guard, “it was a huge weight off myself,” Stevenson said. “I thought, ‘Wow! I did this.’ If I could it, anybody could do it. Put hard work in and you can make anything happen.”

While millions of Americans put on weight during COVID-19, “it actually helped me,” Stevenson said. With the lockdown, there was nobody around tempting him with unhealthy food or drink. And with the extra time, Stevenson researched the best approach to losing weight.

From November 2019 to November 2020, he dropped 100 pounds. No more gluten, dairy — and especially no more chips. It was all fruit, vegetables and healthy proteins “and I quit eating out,” Stevenson said.

Saying “no” to temptation “was super hard,” he said. “It’s a whole mentality change, a change of my whole mindset.”

Compared to his peak at 350 pounds, Stevenson’s nearly petite at 215.

“Right now, I’m at a good weight. I’m trying to get down a little bit more before I ship to basic training,” he said.

The commitment to the Guard is weekends, though full-time could be the plan, Stevenson said.

“I’ll get my feet wet and see what I’m walking into,” he laughs.