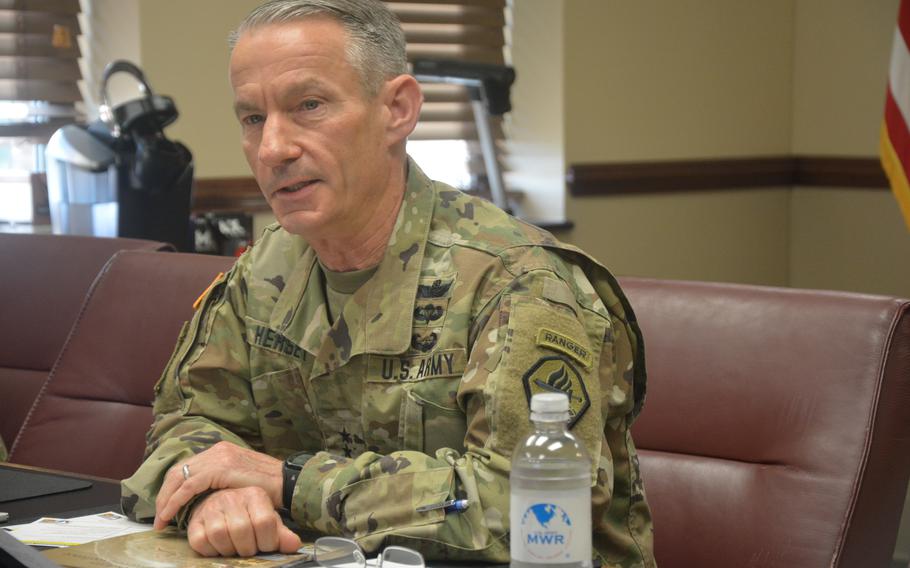 AUGUSTA, Ga. (Tribune News Service) — Although Maj. Gen. Neil S. Hersey will relinquish his role as commanding general of the U.S. Army Cyber Center of Excellence and Fort Gordon next week, he’ll get to continue to serve his country on familiar ground and remain in Augusta.

“I’ve been serving in the Army for 34 years now and I’m very familiar with the cultures of the other services and they are awesome but I think the Army is one of the most awesome places anyone can work, have a career,” he said. “I’m just proud to serve. I’m proud to be part of this team.”

Hersey said the Army likes to cycle generals on a regular basis to ensure they have an understanding of different sides and aspects of the work they are doing.

“I think it’s a very healthy thing for the Army force to rotate folks between the institutional and operational side periodically because you have to have an understanding of both sides of the equation, in particular when you are senior officer,” he said. “For general officers, they want to balance assignments between working at the enterprise level, working at operational units and working at the institutional side.”

Hersey began his Army career more than 30 years ago in Texas after being commissioned through ROTC out of Stephen F. Austin State University. He said it was the ROTC leaders who inspired him to join the Army but it has been the experiences and working with great leaders throughout his career that have kept him in.

During his two years as commanding general, Hersey has mainly focused on the institutional side, being responsible for the cyber school, signal school, as well as for ensuring Fort Gordon met and maintained the requirements for cyber space and signal capabilities. His focus has been to ensure soldiers that come into the Army get proper training and education.

He will now focus entirely on the operation side of Army Cyber.

“Army Cyber Command is a great organization so very much looking forward to working over and doing a different mission over there,” Hersey said. “I’m moving from building the car in the factory and fine tuning it to getting to drive it on the racetrack.”

He said Fort Gordon is focused on training and educating some of the most tech-savvy and smartest soldiers in the Army in order to run the networks, defend the networks and use the networks against their adversaries. He said it’s important for people to get educated about cyber security.

Hersey is glad to be staying at Fort Gordon. After arriving in 2017, he has grown fond of the area, which he and his family now consider home after selling their house in Maryland. He said his family likes living in Georgia and are glad to continue being part of the community.

In terms of the work he has done, Hersey credited the more than 32,000 around Fort Gordon, including enlisted soldiers, officers, sailors, airmen, civilians and their families, for being able to keep the installation running even in the midst of a pandemic. Hersey said he simply feels honored to be working with great leaders and great people.

He is confident Stanton will continue the great work being done at Fort Gordon as he assumes command.

“ Gen. Stanton is a proven leader in multiple levels in the Army. He has commanded in combat, as I have as well,” he said. “I have no concerns whatsoever. He is going to do great. He’s got a great team that he is going to be taking the helm of and the mission is great as well.”