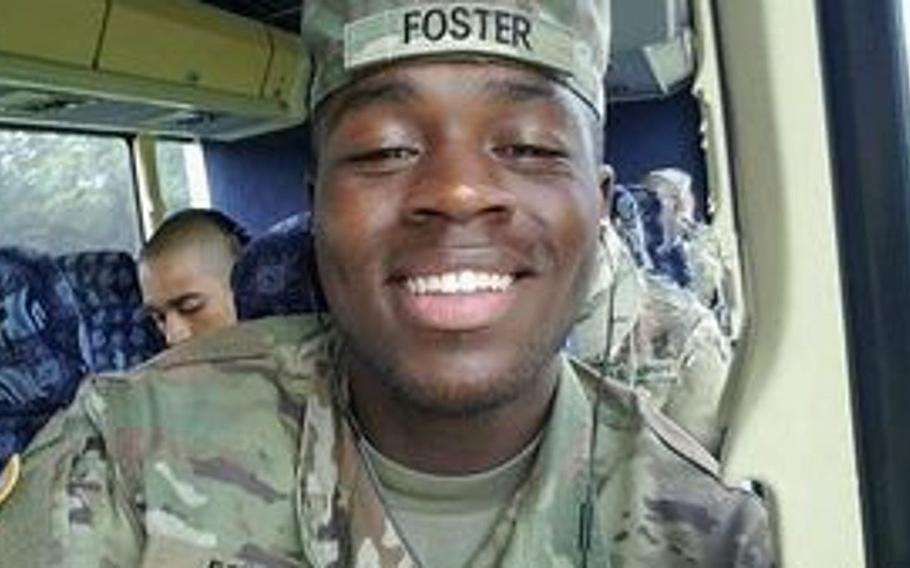 Daquan Foster, a soldier stationed at Joint Base Lewis-McChord, was shot and killed outside of a Tacoma, Wash. nightclub on Oct. 29, 2017. (Facebook)

TACOMA, Wash. (Tribune News Service) — Daquan Foster and Randy Donaldson both seemed to be trying to better their lives.

Foster was serving his country in the U.S. Army while stationed at Joint Base Lewis-McChord. Donaldson was an ambitious musical artist. Both were young fathers who had challenges in their upbringings.

“It looks to me like both of these men were looking for a way out,” Judge Bryan Chushcoff said Monday.

Foster’s loved ones told the court they were incredibly proud of his military service and of the loving father and husband he’d been.

He’d planned for better, they said, and did not deserve what happened to him.

They reiterated that Donaldson didn’t even know him and said they were angry, hurt and confused.

A letter his wife wrote described Foster as a selfless, tolerant, sensitive, humble man with integrity and genuine character.

“Some days I don’t know where my next breath comes from,” said the letter, which deputy prosecutor Jesse Williams read in court.

He called the shooting tragic and beyond senseless.

“I have found this case incredibly haunting,” Williams told the judge.

Foster was a good person, the prosecutor said, who was with good people.

Foster had to be prodded to go out that night, Williams said, because he’d been in the field and wanted to spend time with his son.

That night Donaldson and Marshall Marion Wilson also were at the club. Donaldson is a local rap artist, and Wilson is a music promoter, The News Tribune has reported.

As Foster was walking to his car he and Wilson had some sort of exchange, punches were thrown, then Wilson and Donaldson fired, the prosecutor said, putting others in danger. Wilson was previously sentenced.

Foster was shot several times, and his wife was shot in the thumb.

Defense attorney Thomas Balerud told the court he found his client to be kind and cooperative from the start of the case.

“Where is this monster?” he said.

He said Foster did not deserve to die, and that another man was already in prison paying for that.

Wilson was sentenced to 43 years, four months in prison in 2019 after jurors convicted him.

At the time the court ordered a mistrial regarding Donaldson after the jurors couldn’t come to a decision in his case. Last year a second mistrial was ordered following juror conflicts and excusals. Donaldson’s latest trial started in April.

Balerud said one trial, let alone three, is a lot for someone to go through.

He asked for a mid-range sentence and argued any standard range sentence (34-1/2 years to 45 years, four months) would mean his client will be an old man when he’s released.

“He’s not going to be much of a risk to society based on his age,” the attorney said.

Donaldson’s loved ones maintained his innocence, told the court that he’s been a great father and father-figure to many, and said that he was not the person he’d been made out to be. They described how he had encouraged others to succeed.

When it was Donaldson’s turn to speak, he apologized “to anyone that’s had to deal with this situation.”

Before handing down the sentence, Chushcoff spoke about Foster’s generous spirit. He said he remembered from the trial that Foster had lagged behind at some point that night to talk to a homeless man about getting him a meal. How many of us would do that, the judge wondered?

Chushcoff also said it didn’t surprise him that Donaldson had good qualities. As an attorney, the judge said, he met others in Donaldson’s position who were funny, smart, caring people who were also guilty.

It seemed Donaldson wanted to be successful, he said, and that he was a caring and attentive father.

While loyalty to friends can be a good quality, the judge said, putting it before other things is perhaps what brought Donaldson down.