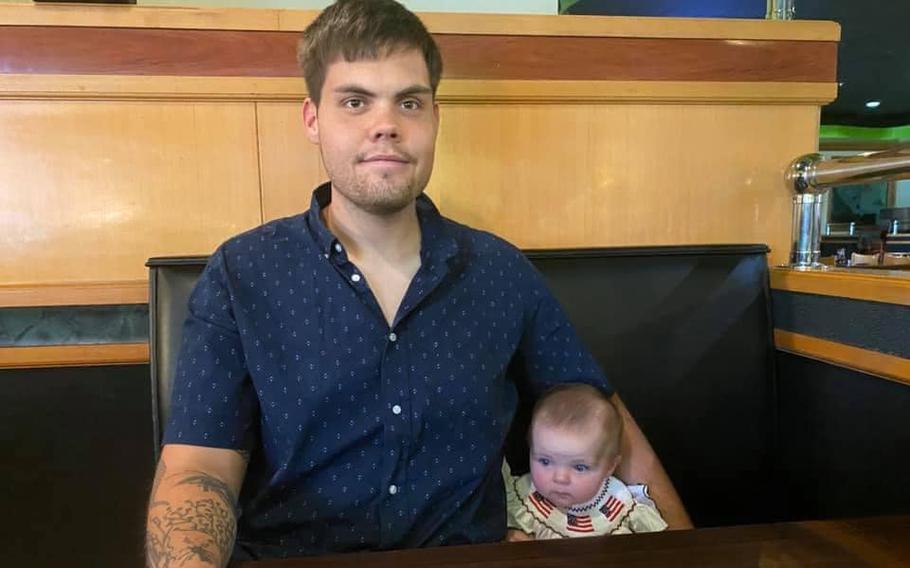 Fort Benning officials are looking for information on the whereabouts of Spc. Jared Ziehm, who went missing around 12:30 p.m. on Father's Day. (4th Ranger Training Battalion/Facebook)

Fort Benning officials were seeking help Monday locating a soldier who went missing from the Georgia base on his first Father’s Day as a dad.

“We are looking for information that would lead to the whereabouts of SPC Jared Ziehm,” the Benning-based 4th Ranger Training Battalion said in a Facebook post late Sunday.

The base outside Columbus, Ga., is home to the Army’s Ranger School, as well as Airborne, armor and infantry training. Maj. Gen. Patrick J. Donahoe posted the plea for help to Twitter early Monday.

Ziehm went missing around 12:30 p.m. when he went to sign in for work, leaving his phone and wallet at home, his wife said in a separate Facebook post earlier in the day.

“He has yet to sign-in or be seen/heard from by anyone,” Gussy Ziehm wrote. “He is in a 2008 red Corolla with black front/back bumpers. He’s in a green tie dye Helen shirt with flannel plush pajama pants.”

The vehicle’s license plate is AYT1142, she said. She had contacted his chain of command, Army Criminal Investigative Command, military police, local hospitals, jails, “any and everyone.”

Ziehm had his military ID card and withdrew about $200 from the couple’s joint account, she said.

“I am worried since it’s Jared’s first Father’s Day and we have plans today to celebrate but no one has seen him,” she wrote. “I’ve driven around for an hour and a half and his chain of command is also concerned.”

Anyone with information about his possible whereabouts should contact the Airborne and Ranger Training Battalion staff duty at 706-544-6980.