Fort Jackson acknowledged a moment of significant change on Friday as Brig. Gen. Patrick Michaelis assumed command of the installation. Michaelis takes the helm of the Army’s premier training post after a three-year stint in which it was led by Brig. Gen. Milford “Beags” Beagle.

Beagle, an Enoree native and South Carolina State University alum, is now headed to be the commanding general of the Army’s 10th Mountain Division at Fort Drum in New York.

There was a change of command ceremony Friday on sprawling Hilton Field at Fort Jackson, an event that was referred to as an “ancient ritual.” Michaelis is now the 52nd commanding general of Fort Jackson.

Fort Jackson trains the majority of all soldiers entering the Army, including two-thirds of the enlisted women. It has basic training graduations 46 weeks out of the year, and more than 40,000 people train there annually.

Michaelis brings a decorated military career to Columbia. His most recent assignment was as a deputy commanding general for the Army’s Recruiting Command Center. He has served at military installations across the nation and overseas and fought in Afghanistan as part of Operation Enduring Freedom. A graduate of Texas A&M University with a degree in history, Michaelis also got a masters in public administration from the Harvard Kennedy School of Government.

Michaelis was effusive in his praise of Beagle — “How do you follow an action figure?” he wondered during Friday’s ceremony — but noted he will work to put his own stamp on the job as Fort Jackson’s commanding general.

“What I think I can do is bring a fresh perspective to Fort Jackson, in line with its priorities, that I will stay with,” Michaelis told reporters. “This is the premier basic training facility in the United States. We want to make sure we focus on the future of the force in leader development. We want to make sure the quality of life for our soldiers, their families and the civilians that work on Fort Jackson every single day is the best it can possibly be.”

With Beagle’s exit, the Columbia installation bids farewell to a commander who has strong Palmetto State roots and who enjoyed an easy relationship with leaders across the capital city. Just last month, Columbia Mayor Steve Benjamin lauded Beagle as an exceptionally effective communicator and someone who is “deeply involved” in the local community.

During a final address at the change of command ceremony, Beagle noted his connection to South Carolina helped enhance his time as Fort Jackson’s top leader.

“It is an advantage when you are at home,” Beagle said Friday, referencing the numerous hometown friends and family members, including his mother, who were in attendance for the program. “I call that home field advantage. You will hear more cheers than you hear boos. That’s the advantage of being at home.”

Michaelis arrives at Fort Jackson at an interesting moment. In the last few months, a pair of off-post incidents have grabbed national headlines. In one, a white sergeant was arrested after a heated encounter with a Black resident on the sidewalk of the Summit neighborhood, an incident that was captured on video and went viral. And on May 6, a Fort Jackson trainee was arrested after authorities said he left post with an unloaded rifle and briefly hijacked a bus filled with elementary school kids. No one was physically injured in that incident.

Fort Jackson’s new leader said he learned of the incidents in the time leading up to his arrival in Columbia.

“Like everybody else, I saw it in the national news, and I saw it in the local news here. So, there was not a sense of anxiety,” as he prepared to move to Columbia, Michaelis said. “There was a sense that the relationship between Fort Jackson and the local community here is strong enough to weather those instances. I will continue to maintain that relationship to weather through them.” 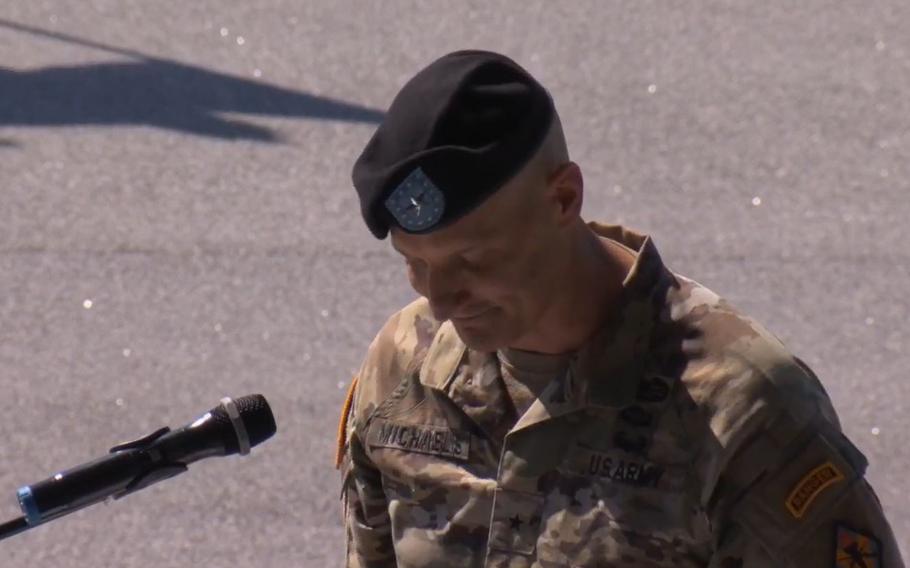