Hawaii soldier pleads not guilty to murder in wife’s death

by
William Cole
• The Honolulu Star-Advertiser • June 18, 2021
This story has been corrected. 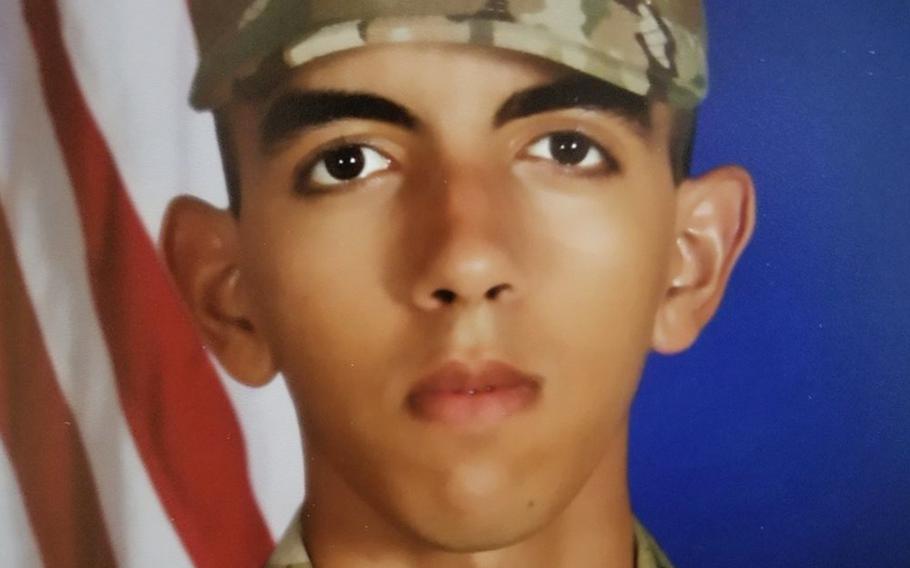 HONOLULU (Tribune News Service) — A 23-year-old Schofield Barracks soldier pleaded not guilty this morning in military court to a charge of first-degree premeditated murder in the on-base beating and stabbing death of his wife, Selena Roth, after their one-year wedding anniversary in January.

Spc. Raul Hernandez Perez also pleaded not guilty through his Army-appointed counsel, Capt. Brian Tracy, to the only other charge: disobeying a noncommissioned officer’s order that he have no contact with his wife.

Col. Mark Bridges, the military judge, set a trial date of Nov. 8. If convicted of the murder charge, Hernandez Perez faces life in prison without the possibility of parole.

The couple was going through a divorce initiated by Hernandez Perez as the soldier rekindled a relationship with a high school sweetheart in Florida, according to an Army prosecutor.

Despite that, on Jan. 9 — the day of their anniversary and referred to as “Raul Day” — the couple spent the day together and went to Pearlridge mall, where they were seen on camera footage holding hands, Army prosecutor Capt. Matthew Bishop said at a May 20 Article 32 hearing similar to a preliminary hearing in civilian court.

Hernandez Perez, a signals intelligence analyst assigned to the 500th Military Intelligence Brigade, obtained a temporary restraining order against Roth, 25, claiming “psychological abuse,” but Bishop said the soldier, who lived in barracks housing at the time, would go to Roth’s house on base and have sex with her, leave and call police to say she was violating the restraining order.

On Dec. 15 he made himself the beneficiary of a $100,000 life insurance policy on Roth, the Army said. Early in the morning on Jan. 10, Hernandez Perez Googled in Roth’s home how many swings it took to kill someone with a bat, and then beat and stabbed Roth to death, Bishop said at the Article 32 hearing.

“He wants to make sure she is dead,” Bishop said at the time.

The body of the Army veteran, also a one-time signals intelligence analyst and mother of a young daughter, was found on Jan. 13 stuffed in an outdoor trash bin that had been moved just inside the two-story house, Bishop said. Evidence photos show one arm and hand of Roth’s visible poking up through a towel and sheet rolled up and thrown on top of her.

Hernandez Perez is being held in the brig on Ford Island. He appeared in court today at Wheeler Army Airfield wearing his camouflage uniform.

Bridges, the judge, said the charges were served on the defendant on June 11. Maj. Gen. David Wilson, commander of the 8th Theater Sustainment Command, approved the charges.

At the Article 32 hearing, Bishop acknowledged that Hernandez Perez and Roth had a “very rocky” relationship. “More importantly, he wanted to be with” his high school sweetheart in Fort Myers, Fla., “and Selena was in the way of that,” Bishop said.

Hernandez Perez and the Florida woman were planning a life together and he had taken engagement steps. He also had checked into flights to South America, Bishop said.

Roth was still in love with Hernandez Perez and she was angry about his relationship with the Florida woman, “but he is no longer in love with her,” the prosecution said. The discord led to “multiple domestic incidents.” The defense made no statement, and no witnesses were called.

The night of Jan. 9 the pair returned to Roth’s house and had sex, and Hernandez Perez was there from just after midnight to about 8 a.m., Jan. 10 with the soldier later denying he was there, and then admitting he was, Bishop said.

Aubrey Rangel, Roth’s sister, previously said on Facebook that “my family and I knew something was wrong because we had not heard from Selena in days,” and Rangel called military police to request a wellness check.

What police were greeted by on Jan. 13 was “truly horrific,” Bishop said.

The master bedroom had blood splattered on all four walls and the ceiling, Bishop said. Blood had heavily stained the spot on the bed mattress where her head would be.

Bishop said Roth was a woodworker. Her garage was strewn with leftover pieces of wood, and Bishop said Hernandez Perez retrieved a several-foot piece of two-by-two to beat her on the back of her head and used a kitchen knife to stab her four times in the back.

Roth was probably lying on the bed early on the morning of Jan. 10, most likely on her stomach, “showing there was no threat to the accused,” Bishop said. There were no defensive wounds on her hands, he said.

The Honolulu Medical Examiner’s office found that Roth died as a result of blunt force trauma to her head with stab wounds as a contributor, according to Bishop.

In the backyard, the ground was found freshly dug in roughly a “grave shape.” Bleach, vinegar, Lysol and paper towels were in the kitchen. On Jan. 11 and 12, Hernandez Perez returned to Roth’s house and Googled trash pickup days, the prosecution said.

A cutline in a previous version of this story listed an incorrect age for Spc. Raul Hernandez Perez. He is 23.
Justice