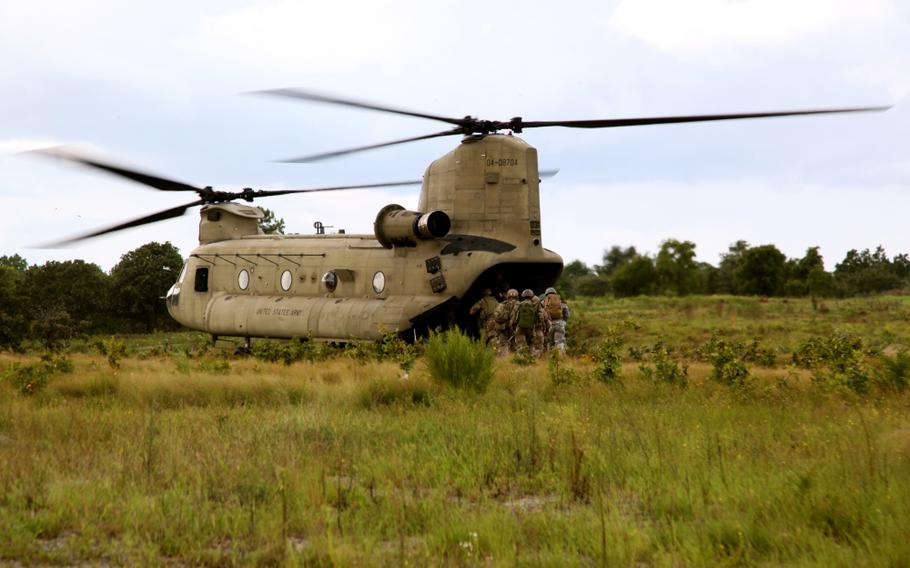 Others, intrigued by the late-night displays of military might, looked skyward. Some living close to the action pulled lawn chairs to the street to get a better view of combat and aircraft exercises around the old Night Moves strip club on South Walnut Street late Monday and into Tuesday morning.

People are left wondering: Should there have been advance warning of training such as this, which shook more than windowpanes as worried and sometimes scared residents wondered what the heck was going on?

Other than paper flyers Bloomington Police Department personnel stuck in doors at businesses and apartment complexes adjacent to the training site, there was no prior notice given to citizens that the loud training over night Monday was going to happen.

Unlike city and BPD officials, Monroe County Sheriff Brad Swain put the word out, warning people living in Bean Blossom and Richland townships that the training was planned late that night and would involve military aircraft and loud noises.

While city officials tried to limit advance knowledge of the training, Swain used the sheriff’s department’s Facebook page to inform citizens ahead of time on Tuesday afternoon.

“Important notice” said big red letters in a box that marked the post.

“Special attention to Richland and Bean Blossom Township residents. The military will be conducting a training exercise later this evening, northwest of the town of Ellettsville, and is expected to last for a few hours. Local law enforcement agencies and our dispatch center have been made aware. Expect to hear loud noises periodically during the training scenario.”

Swain supports the simulated combat training, and said he welcomed the presence of U.S. armed forces personnel in town. But it’s important to inform citizens about the training, he added, and what it entails.

“We were aware of the upset caused to some from the activity the previous evening,” he said, referring to the Army training near Night Moves and other locations in Bloomington.

Swain said he didn’t find out about Tuesday night’s training mission until that afternoon when a representative from the special forces command called to say “they were training that night in an area under my jurisdiction,” Swain said.

“While I appreciated the call, I cautioned that they should advise the sheriff of every county they train in, regardless if it occurs inside city or town boundaries.”

The sheriff said “giving notice to the folks within possible sight and sound of the actions was a courtesy to them, and a hope to minimize 911 calls tying up the communications lines.”

Bloomington Mayor John Hamilton said he learned of the Army’s plan to train locally a few months ago.

He said an Army public affairs officer said early notification could put the safety of onlookers at risk, so the city delayed public notification until the day of the training. That’s when flyers were left at apartments and businesses adjacent to the city-owned former strip club site.

Yael Ksander from the mayor’s office said 40 people in the city called 911 during the five hours of active training exercises that began late Monday.

She said the city didn’t agree to host the training but “did not object” when Army officials contacted Bloomington saying they intended to use city-owned property for late-night training.

“It would be inaccurate to suggest that the City of Bloomington could prohibit a federal government training event,” Ksander said. “Even if the city had not been asked about the use of these properties, the training could have gone on nonetheless.”

Hamilton apologized for the upset the training caused around Bloomington.

“We recognize that Monday evening’s interruptions were concerning to some residents, and apologize for any inconvenience or worse,” he said in response to a question from The Herald-Times last week. He promised better communication in the future.

Neither he nor neighbors in the area were informed of the 10 p.m. to 2 a.m. maneuvers that involved loud explosions that damaged the building and scared people living nearby.

“I was not pleased to learn of this after the fact,” Swain said last week.

Seven Oaks officials issued a statement back then saying they had been told notification would be made ahead of time to people in the neighborhood.

“We were disappointed that notice was not given and that the noise levels far exceeded what we had been led to expect,” the 2018 statement said. “Out of respect for our families and neighbors, we will not allow military training to take place on campus in the future.”

Contacted after Monday night’s training in Bloomington, an Army spokeswoman initially said Army officials organizing training such as this around the country advise local cities and police departments to provide advance notice through social media and local news outlets.

But Hamilton said the city was asked to limit public notice of the training event. “The military requested that broad public notification not be issued in order not to compromise the safety/security of the exercise,” Ksander said in a statement Tuesday.

The Army spokeswoman then revised her initial statement about widespread advanced notification “after talking to folks on the ground for this training to clarify.”

Elise Van Pool said in an email that “we specifically recommended what is known as a reverse 911 message, a text message that goes out to users who sign up for notifications from their local law enforcement agencies,” she said. But it didn’t happen.

“Again, we would like to apologize to the citizens of Bloomington,” she said, reiterating the importance of the keeping soldiers well trained.

“We understand the impact this training can have and appreciate the support of the community as we balance keeping the training safe and alerting residents to training-related impacts.”

Sybil Eakin lives on the city’s north side, near Griffy Lake and a few miles from the former Night Moves building. She described training-related impacts from that night when she didn’t have an explanation for what was going on outside.

“We heard a noise like a very large tank going down the street at 10 p.m. It shook our windows. Looking out, we could see the shadowy shape of the copter moving towards the IU athletic fields.”

She wishes someone had warned her about the training.

“Given the tense atmosphere in so much of the country right now, it does seem to me that the citizens not only of Bloomington but perhaps of the surrounding county should have had some forewarnings from the Army or the city,” she said in an email to the newspaper inquiring about the noise.

“In the middle of the night, as the house shook, such thoughts of violence couldn’t be totally disregarded,” she wrote.

The Army often fields complaints about off-base training and the lack of notification to people in the vicinity.

An April 2019 Army Times article examined the issue after people living near downtown Raleigh, North Carolina, went into an uproar about unannounced military training at the abandoned Capital Plaza Hotel.

Witnesses described being disturbed by low-flying helicopters and loud explosions, .