All soldiers must achieve rank of corporal before becoming sergeants, Army announces 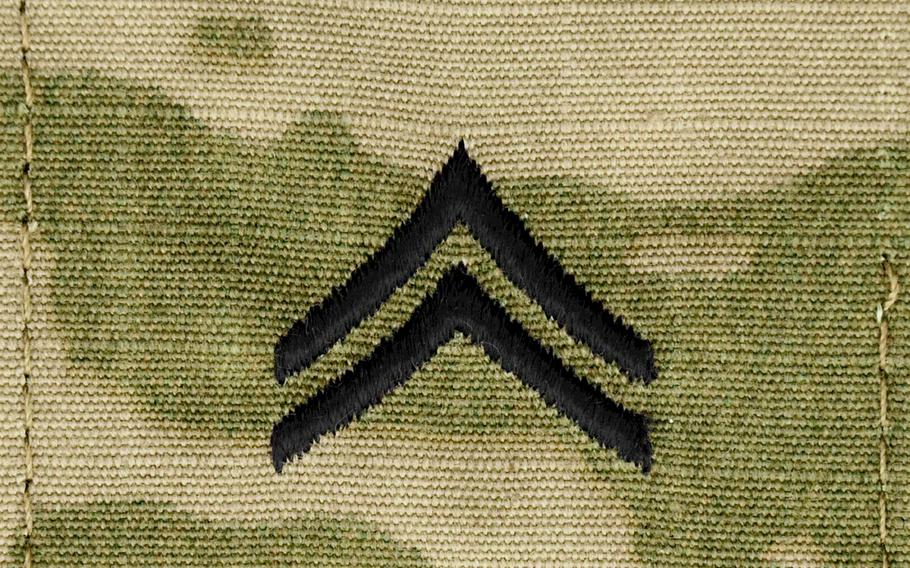 Starting July 1, soldiers with the rank of specialist will be laterally promoted to corporal if they've been recommended for advancement and have completed the Basic Leader Course. (File)

All junior enlisted soldiers now need to achieve the rank of corporal before getting promoted to sergeant, a move aimed at developing leadership skills earlier, the Army said in a statement.

Starting July 1, soldiers with the rank of specialist will be laterally promoted to corporal, a junior NCO position, if they have been recommended for advancement and completed the Basic Leader Course.

The change means soldiers “will shoulder the responsibilities of noncommissioned officers earlier in their careers,” the Army said in a statement last week.

“We want to get after leading, teaching and mentoring our junior enlisted Soldiers early,” Sgt. Maj. Kenyatta Gaskins of the Army’s personnel management directorate said. “This is a junior leader development process and that’s how we’re looking at this.”

Corporals earn the same pay as specialists, but outrank them as NCOs due to extra responsibilities like leading small teams and overseeing soldier training.

Soldiers who already hold the rank of corporal also will be required to meet a higher standard. Current corporals must qualify for the promotion board and graduate from the BLC course to remain corporals, or they will be assigned back to specialist, the Army said.

The change doesn’t involve a pay bump when making corporal. Likewise, those required to transition back to specialist won’t lose any of their base salary, the Army said. The length of time spent as a corporal before moving on to sergeant will vary.

“This is a change in culture,” Gaskins said. “This is not something we’re used to.”

The directive applies to all active duty and Active Guard Reserve soldiers. The instruction takes effect for reservists Oct. 1.

In the past, corporal was a rank for soldiers identified as having special leadership potential. But it has become more common over the years for most soldiers to make the leap directly from specialist to sergeant. The Army said the shift is connected to a push by Sgt. Maj. of the Army Michael A. Grinston to bolster the junior NCO corps.

“We rely on junior leaders to build cohesive teams that are highly trained, disciplined, and mentally and physically fit,” Grinston said. “In many cases, a specialist is charged with that responsibility. This allows us to recognize their role as a noncommissioned officer and ensure they’re getting the coaching and mentorship they need to be successful.”

The hope, Gaskins said, is to develop leadership traits earlier in military careers to prevent “corrosives” to the force, such as sexual assault and harassment, discrimination and suicide.