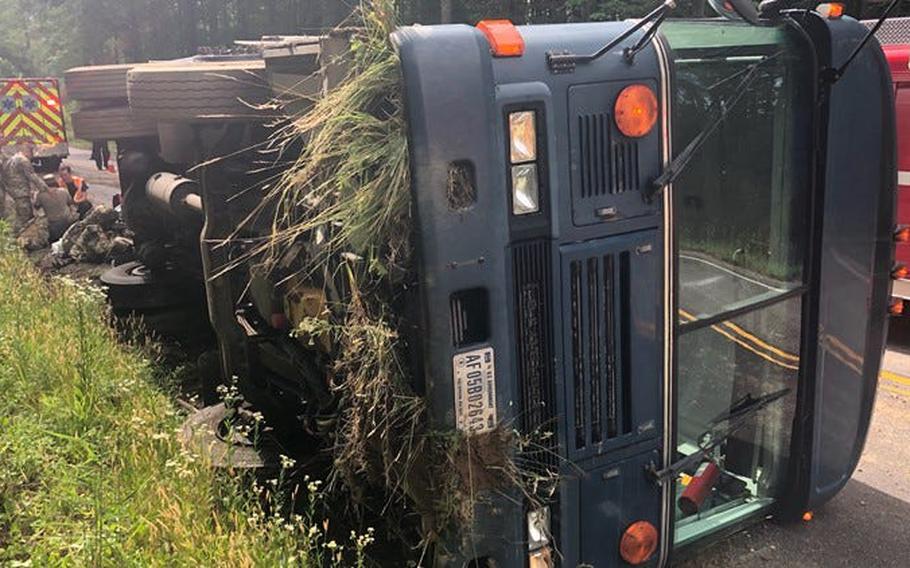 This photo shows a military transport bus that wrecked on state Route 10 in Prince George, Va., Monday, June 7, 2021. The bus was carrying 25 members of the Air National Guard 192nd Security Forces from Joint Base Langley-Eustis in Hampton to Fort Pickett near Blackstone when the accident occured. (Prince George Police)

PRINCE GEORGE, Va. (Tribune News Service) — An investigation is under way to determine what caused a military transport bus carrying National Guard personnel to crash on a Virginia road Monday morning. Fourteen people were injured, four of which were taken to local hospitals for observation.

The accident happened shortly before 10 a.m. along Route 10, Prince George Police Officer Alexis Grochmal said. The bus was westbound near Salem United Methodist Church when it ran off the right side of the road, hit a ditch and turned over onto its driver side.

The bus was carrying 25 Guard members from Joint Base Langley-Eustis in Hampton to Fort Pickett in Nottoway County, Grochmal said.

Grochmal said 10 of the 14 people injured in the crash were treated at the scene. Four were sent to local hospitals for additional treatment, but the extent of those injuries was not known.

Prince George is being assisted by Fort Lee Military Police and the Virginia State Police in determining why the bus wrecked.

The unit leadership is closely monitoring the condition of all personnel injured in the incident and will continue to coordinate with local and state law enforcement in the investigation,” Reeves said by text late Monday afternoon.