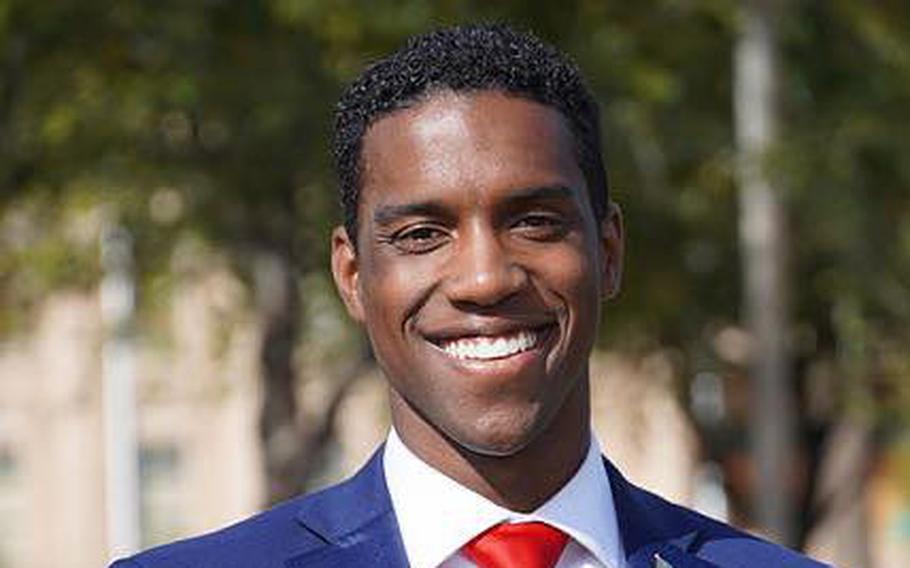 First Lt. Alex Stovall is chaplain candidate in the Army Reserve who has announced he is running as a Republican for a House seat representing Arizona’s 9th Congressional District. The Army is investigating him for wearing his uniform while promoting his campaign for Congress on a right-wing television network and making statements that denigrated President Joe Biden. (Alex Stovall for Congress Facebook)

The Army is investigating a Reserve officer for wearing his uniform while promoting his campaign for Congress on a right-wing television network and making statements that denigrated President Joe Biden, service officials said.

First Lt. Alex Stovall, 26, is a chaplain candidate in the Army Reserve who has announced he is running as a Republican for a House seat representing Arizona’s 9th Congressional District. A spokesman for the Army Reserve said Tuesday that the service was aware Stovall had appeared in his combat uniform during an interview about his campaign on the One American News Network last month and he had publicly questioned Biden’s legitimacy as commander in chief.

“We are aware of the situation and are investigating,” said Army Lt. Col. Simon Flake, an Army Reserve spokesman. “The U.S. Army Reserve follows the Department of Defense's long-standing policy regarding service member involvement in partisan political campaigns to avoid the perception of DoD sponsorship, approval, or endorsement of any partisan political candidate, campaign, or cause. Standard procedural steps are being taken to ensure the investigation is conducted in a timely and thorough manner and appropriate rights will be afforded to all involved.”

Flake declined to detail specifics Tuesday about the probe into Stovall's actions.

Service members serving in a Reserve capacity are allowed to run for partisan political office, though they must not appear in uniform as part of their campaign or use their military service to imply Defense Department “sponsorship, approval or endorsement” of their activities, according to department directive 1344.10.

Stovall’s appearance in uniform, which he told OANN during the interview occurred after he “got a last-minute call” to military duty, violated that directive, according to Mikey Weinstein, the founder and president of the Military Religious Freedom Foundation, which advocates for the separation of church and state within the military.

Weinstein also accused Stovall of illegally denigrating the president. In an April 14 appearance on the streaming radio network Gun Freedom Radio, Stovall said he did not consider Biden a legitimate president.

“We saw the inauguration of the — well, I don’t think he’s president — [what]ever, you would call this sleepy guy in office,” Stovall said on the radio program.

In a May 29 tweet, Stovall also attacked comments made by Biden about a young girl. The first lieutenant wrote: “Resident Biden believes a 6 year old looks 19[.] In or out of uniform I will never accept these comments as normal or acceptable[.] How many people feel good about his statements ? .. [I’ll] wait. I said what I said.”

The tweet was in reference to Biden's apparent attempt one day earlier to compliment a young woman on stage with him during a speech that he gave at Joint Base Eustis-Langley, Va. Biden told the crowd the young woman with her family at the event "looks like she's 19 years old, sitting there like a little lady with her legs crossed." According to the New York Post, the girl 'appeared to be elementary-school age."

Stovall did not respond to a request for comment Wednesday. In an interview with Military.com, he defended his actions, telling the website that he had not broken any rules or regulations. Military.com reported Tuesday that Stovall ended the interview abruptly after he was asked about specific allegations.

In an open letter to Biden, Weinstein called for Stovall to be prosecuted under the Uniform Code of Military Justice, labeling his actions “one of the most repulsive acts of criminal contemptuousness towards a U.S. president by a uniformed member of the Department of Defense (DoD) we at MRFF have ever heretofore witnessed.”

“Mr. President, MRFF is respectfully asking you to ensure, as our American military’s commander in chief, that [1st Lt.] Alex Stovall is justly, expeditiously, aggressively, and visibly punished for his incredibly reprehensible actions, as detailed in this open letter to you,” Weinstein wrote in the letter to Biden dated Tuesday. “Sir, we simply cannot have Army [first lieutenants] bragging and boasting about calling our president a pedophile and illicitly leveraging their military status to win elections to Congress in blatant violation of DoD regulations, directives, instructions, and the UCMJ!”

Stovall’s service records show he first enlisted in the Army in 2013. They also show he has received an Overseas Service Ribbon, indicating he has deployed outside the United States.

Stovall, in campaign material and broadcast appearances, has said he is running for Congress in Arizona to oppose Rep. Alexandria Ocasio-Cortez, D-N.Y., who he labeled in a campaign advertisement as a socialist who "hate[s] ... God and America.”

“I don’t fight for this country to watch it be taken over by AOC,” Stovall said in the ad, using Ocasio-Cortez’s initials.

Stovall’s Army records show he has not served in combat.

If Stovall wins the seat — in a district that voted 61% last year to reelect Democratic Rep. Greg Stanton — he would become the youngest Black Republican ever elected to Congress.