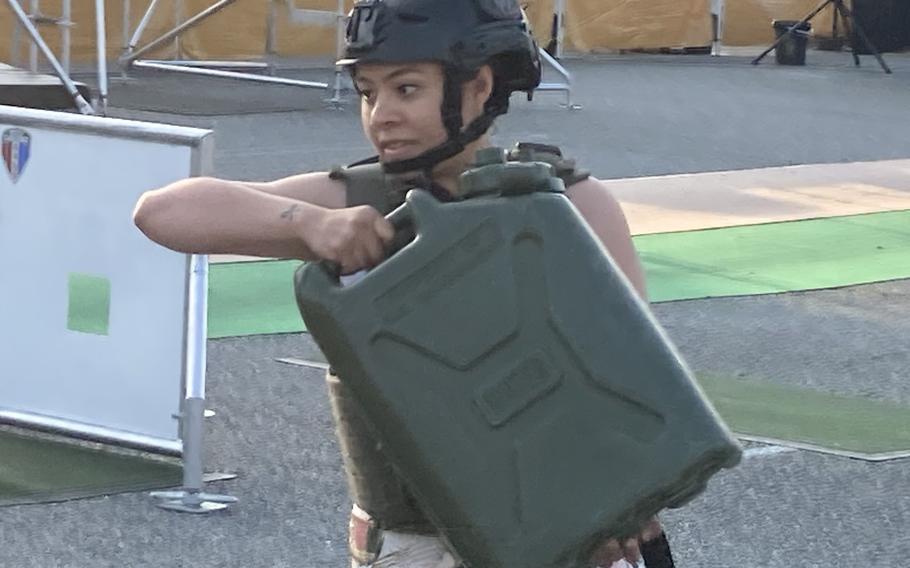 NEWPORT NEWS, Va. (Tribune News Service) — It was the ninth event — dragging a 200-pound dummy some 33 yards to the finish line — that was the toughest at Fort Monroe’s “battle challenge” obstacle course contest.

A minute and a half earlier, Sgt. Patricia Martinez had sailed through the jerrycan lift and shift – carrying five full, 40-plus pounds to a shelf – and she nailed the next two shooting events, hitting a target with a laser-fitted rifle from a kneeling and then prone position. At that point, she was pretty much neck and neck with the soldier she was racing against.

Some soldiers running the course earlier, like Col. Chesley Thigpen, the “mayor” of Fort Eustis, had opted for a two-at-a-time approach to the jerry-cans, aiming for speed.

But Martinez was a one-at-a-time competitor.

“I shifted a lot of these at my old unit ... I decided to do one at a time,” said Martinez, who is now with the “Beachmasters” of the 97th Transportation Company, specialists in bringing all the supplies soldiers need up rivers and across beaches.

She knew that for her – with the shooting events coming right afterwards – it’d be faster to do one at a time and her arms wouldn’t be trembling quite so much for for the shooting.

At that point in the obstacle course, after scrambling 13 feet up a cargo net, going hand-over-hand down a 20-foot rope, hauling themselves over a 7-foot-high wall, swinging along a 10-foot-tall set of 12 monkey bars, crawling through a 3-foot-across tunnel and doing the jerrycan lift-and-shift – all the while while carrying a rifle and 20 pounds of weights, most soldiers are breathing pretty hard. And even the most seasoned competitors, like Thigpen, have plenty of adrenaline flooding through their veins by this point.

But with all that, it’s important to focus. Part of the test is remembering to move the rifle’s safety switch to semi-automatic. The rest involves aiming through a window – a roughly 2-foot-by-2-foot space at a 1-foot square target some 30 yards away – and hitting it with each of two shots. Dashing a few yards on to the prone position shooting test really isn’t enough time to catch a breath.

“In the Army, we’ve really been thinking about reflex shooting – moving fast and then firing,” Thigpen said.

For Staff Sgt. Miguel Rowe, an instructor for the helicopter mechanics students of the 128th Aviation Brigade, that’s all about training.

Training is why Rowe, like many but not all soldiers running the obstacle course, opted for using one arm, rather than both, for the dummy drag.

That way, he could raise the rifle he still carried in his other arm, rather than placing it on the dummy, as some soldiers did.

“That’s how we’re trained; you want to be ready to fire if you need to,” he said.

The one-armed pull is actually more efficient, as well, said Paul Davis, the physiology Ph.D. who founded the group that designed the “battle challenge” obstacle course.

The one-armed drag was how Private Brian Faust, an aviation mechanic student who just joined the Army in January tackled the dummy drag in his fourth run through the course.

That time, he finished within one second, at 1 minute 27 seconds, of beating a record.

“Dragging the dummy was the toughest,” Faust said.

The course was one of several Fort Eustis events in the run-up to Memorial Day, itself traditionally a quiet day for reflection on the base.

In those events, units compete for the Commander’s Cup. But while the obstacle course sparks plenty of competitive spirit, in large part by design, it’s not only about competition.

Thigpen ran it with the top enlisted solider of his unit, Command Sgt. Major Abby Macdonald.

“I burned up a lot of energy on the wall,” she said – it was at the 7-foot wall that Thigpen drew far ahead.

There’s a system to it, Davis noted. While lots of soldiers try to haul themselves over by brute force, basically in a kind of pull-up, the best way over is to swing a leg up, catch the top with a heel and use the momentum to carry you up. Macdonald tried the pull-up approach at first; Thigpen was a leg-swinger.

By the time she reached the dummy pull, like many others, Macdonald was tired. Thigpen had finished, and was calling encouragement.

But then, when she was about halfway down the the course, yanking the dummy with both hands and leaning all her weight to move it, she tripped. Thigpen ran up. He grabbed the dummy with one hand; she grabbed it with one of hers. Together, they dragged it across the finish line.

“I wasn’t going to leave my battle buddy out there,” Thigpen said. “We’re a team.”