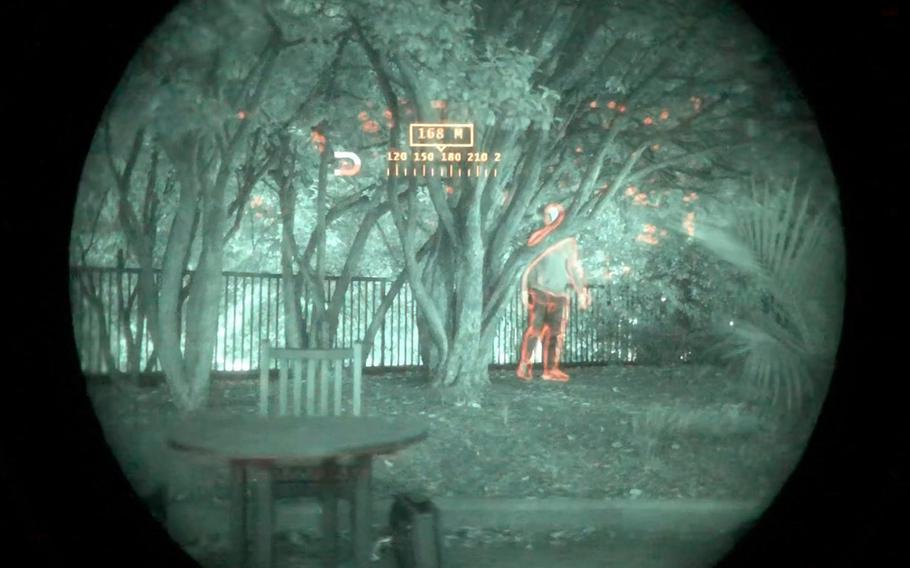 An example of the type of imagery soldiers might see through the Army's enhanced night vision goggles. (Elbit)

WASHINGTON — The Army is training with futuristic night-vision goggles that transform lurking in the dark into a video-game-like experience.

The armed forces have released a stream of videos this year showing soldiers, objects and locations after dark outlined in a glowing white light. The footage looks like scenes from role-playing video games such as "Halo," but it actually shows what the world looks like through the military's new Enhanced Night Vision Goggle-Binoculars (ENVG-B).

The product is part of a years-long push to modernize tools used by the military, officials say. The helmet-mounted device, loaded with thermal imaging and augmented reality capabilities, introduces tech found in smartphones and gaming systems to traditional night vision hardware.

"It brings in gaming capabilities that kids are used to from video games. Now, they're getting to use those when they join our military forces," said Erik Fox, general manager at Elbit Systems of America, the company behind the devices. The firm is owned by Israel's Elbit Systems, an international defense electronics company.

The goggles represent a shift away from the green-washed imagery typical of traditional night equipment, which can cause eyestrain and fatigue. The new image is easier on the eyes and provides more clarity, making targets easier to spot through clouds of smoke and in low-visibility weather. 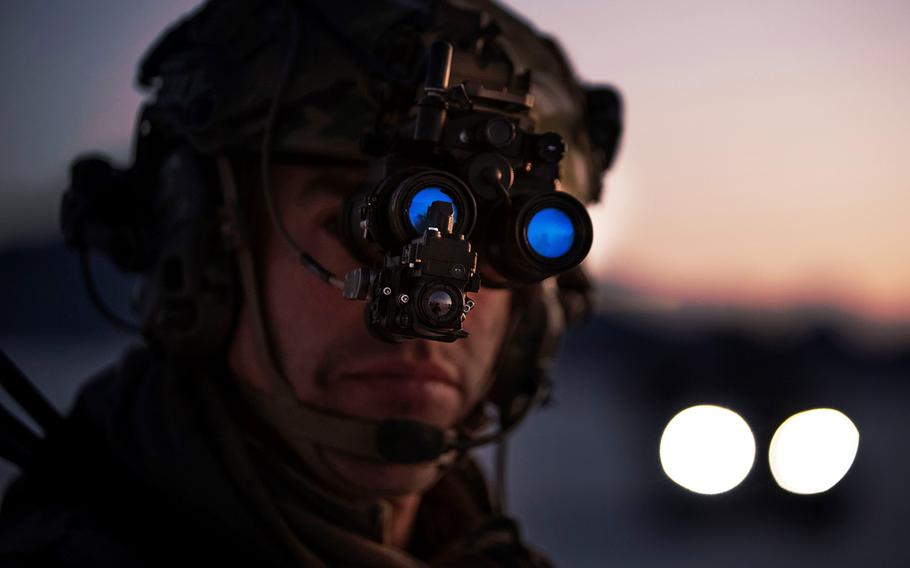 "Night vision goggles with the green tint seems cool and all, until you've actually been wearing those all night," said Blake Gaughan, infantry platoon leader at Joint Base Lewis-McChord in Washington state. "If you're running continuous night operations, it just gives you a headache." He has used the new goggles and is helping train others on how they work.

The new night vision capabilities take center stage in several videos and screenshots posted online by the military combat squad, the Lancer Brigade. In one video, soldiers are lit up under the night sky as they load ammunition into a machine gun for weapons training. In one series of photos, the soldiers are clearly outlined against a concrete wall at night.

Elbit began shipping the goggles to the Army last year in a deal worth up to $422 million for enhanced night vision systems. The company based in Roanoke, Virginia, specializes in electronics for homeland security and says its next-generation binoculars infuse the latest in connectivity with old vacuum tube technology found in black-and-white TVs.

The military's new gadget works by amplifying light that's already out there, either from the moon, stars or sources on the ground. The device senses tiny amounts of photons reflected off seemingly dark objects. Then, the photons pass over an internal surface engineered to convert light into electrons. The electrons are amplified by striking a quarter-sized glass plate that has millions of tiny holes in it. Then, they pass a screen coated with phosphor, a fluorescent substance, to create an image.

Traditionally, a green phosphor is used, which is why green-hued night vision imagery is well-known. But Elbit's latest device uses white phosphor instead, producing black and white images, which officers say creates more contrast and greater clarity at night.

"Generally, when you think of night goggles, you think of ambient green light, which is helpful, but this is an improvement on that and allows for better accuracy," said Daniel Mathews, public affairs officer for the Lancer Brigade.

The Army's latest goggles include an outline mode, which creates glowing white outlines. There's an augmented reality overlay that can display navigation instructions and maps. The goggles can also connect wirelessly to others in the platoon, so if a soldier spots something, they can mark that object in cyberspace and have it show up on other people's binoculars.

The upgrade was also built with an adjustable intensity tool to work during daylight hours, where previous generations couldn't.

"With a lot of the older models, if a flashbang went off, or if there was a bright light, you would be almost blind because the binoculars were taking in all that light," Mathews said. "These have the ability to adjust so you can use these during the day at dusk."

And it's not just the army suiting up with next-level night vision systems. The U.S. Marines also recruited Elbit to replace its existing night vision tech with a pair of binoculars for greater depth perception. The project kicked off in 2019 to replace the military branches' old monocular system with updated binoculars.

The monocular goggles meant soldiers could only see nighttime imagery through one eye. And in April, the Marines announced that Elbit would upgrade its night vision goggles through 2022. Part of that deal includes a helmet clip-on that detects infrared energy (heat) and enables soldiers to see thermal images.

The Army's version has the heat imaging system built-in, and it takes objects giving off heat and outlines them in orange, which makes enemies in the field easier to spot, soldiers say.

The army is deploying them on a rolling basis.

"It's a new piece of tech, and we want to make sure everyone has time to get properly trained" on how each of the modes work, says Gaughan, an infantry soldier who leads a battalion in Washington state. "It's an ongoing process to get people properly trained rather than just handing them all out."

If you're a serious outdoorsman, hunter or survivalist, the goggles can be yours. Elbit supplies them to Pennsylvania-based Night Vision Devices Inc., a reseller offering the latest pair online for about $7,500 plus additional costs for batteries and accessories. The firm's monoculars start at around $2,400.