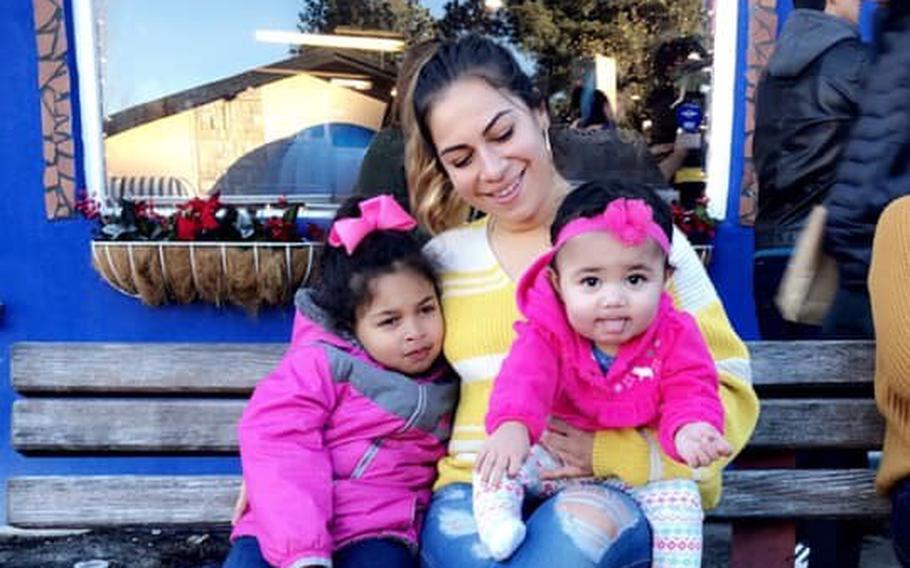 Alianna Juliet Malufau, seen with her mother Nataly Perez and sister Aaliyah, was just 10 months old when she died Jan. 19, 2019, in El Paso, Texas. Pfc. Luis Morales-Sanchez, a Fort Bliss soldier, was convicted of murder for her death at a court-martial May 10. (Nataly Perez)

AUSTIN, Texas — A Fort Bliss judge sentenced a soldier to more than 40 years in prison for murdering a child with his hands, along with a string of other charges including drug use and domestic violence, according to officials at the Texas Army base.

He pleaded not guilty to murder but was convicted by a military judge May 10 during a general court-martial. On Monday, two weeks after his conviction and sentencing, Fort Bliss released documents to specify all charges that were referred to judicial proceedings one year ago.

According to the charge sheet, on Jan. 19, 2019, Morales-Sanchez caused “non-accidental and abusive head trauma to a child under the age of 16 years with his hands.” 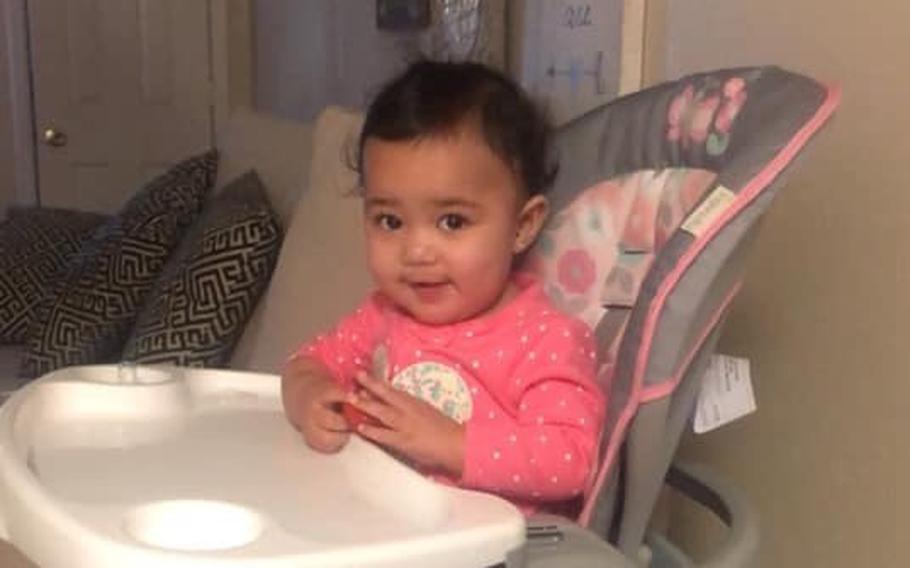 Alianna Juliet Malufau was just 10 months old when she died Jan. 19, 2019 in El Paso, Texas. Pfc. Luis Morales-Sanchez, a Fort Bliss soldier, was convicted of murder for her death and for several other charges, including aggravated assault and drug use, at a court-martial May 10. (Nataly Perez) 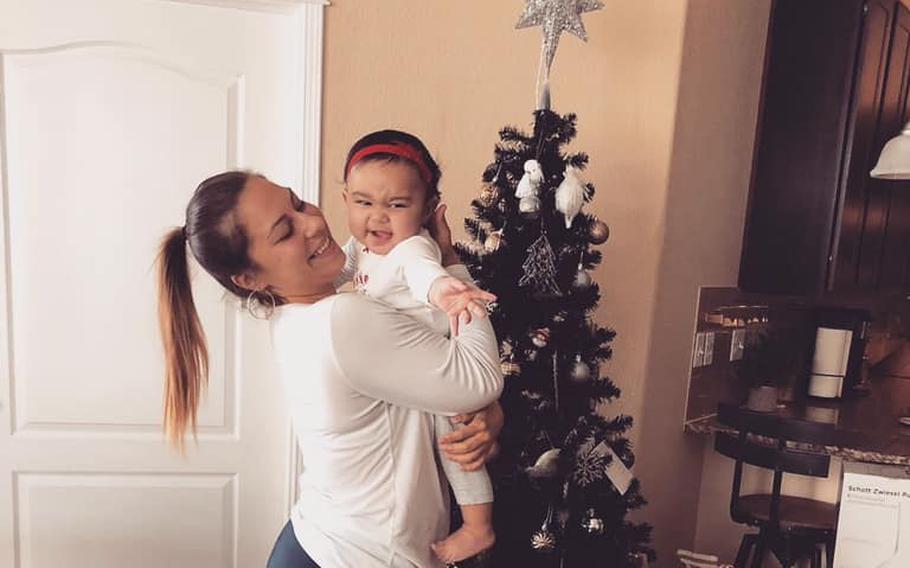 Nataly Perez was at work on Jan. 19, 2019, when her then-boyfriend, Pfc. Luis Morales-Sanchez, called her because something was wrong with her daughter, 10-month-old Alianna Juliet Malufau. Two years later, during a general court-martial at Fort Bliss, Texas, Morales-Sanchez was found guilty of murder in Alianna’s death and was sentenced to more than 40 years in prison. (Nataly Perez)

Fort Bliss officials would only confirm the soldier’s victim as “Miss A.M.” However, Nataly Perez, a 27-year-old former Army sergeant, identified his victim as her daughter, Alianna Juliet Malufau, who was 10 months old when she died Jan. 19, 2019.

“It’s like I reopened [the loss] basically all over again,” Perez said of the court-martial proceedings. She wasn’t allowed in the courtroom during the trial because she was a potential witness and had to remain in a separate room at the courthouse. Her father traveled from Puerto Rico to sit in and represent the family, she said.

The day Alianna died, Perez said she left the infant and her older daughter, Aaliyah Harvey, then 4, with Morales-Sanchez, whom she was dating. It was her second day of a new job at the El Paso International Airport.

She said the soldier called her during her shift, telling her something was wrong with the baby. By the time Perez drove home, emergency responders were there attempting lifesaving measures, but Alianna died.

The mother still doesn’t know exactly how much of the crime her older daughter might have witnessed. Aaliyah, now 7, has said she saw Alianna’s eye roll back and that she asked Morales-Sanchez if her sister was dying.

“She wakes up with nightmares. She wakes up crying. She misses Alianna and said she dreams of her,” Perez said.

A few days before Alianna died, Perez said she was folding laundry while her two daughters were playing on the bed. Chasing her sister, Alianna dove head first over the edge of the bed, but Perez said she caught her by the foot, causing Alianna’s head to swing forward and hit the frame of the bed. The impact left a bruise.

In the two years between her daughter’s death and the court-martial, Perez said she thought she was responsible for Alianna’s fatal injury and that Morales-Sanchez was only on trial for violence he had committed toward her. She said no one ever showed her evidence that linked Alianna’s death to Morales-Sanchez. Perez’s father learned of the evidence for the first time in court, and then had to repeat it back to her, she said.

“It would have been hard to hear, but as mother, I feel like I should have known as well,” Perez said. “When my dad came that Wednesday, he sat down and he started telling me and I broke. That night I ended up in emergency room with a panic attack. It was just horrible because I’ve been carrying this cross for two years that my daughter died because of me or that I inflicted her pain. I should have caught her different.”

During the trial, an expert witness presented evidence collected through the soldier’s PlayStation gaming console to show that Morales-Sanchez was online and that there was a gap in activity during his session that lined up with the time investigators believe Alianna was fatally wounded, Perez said her father told her.

“I’ve been torturing myself for two years. All of a sudden, they hit me with, ‘No, take that pain away. Put the pain in your heart that your daughter was murdered,’ which is hard, too,” Perez said through tears.

In a statement, Fort Bliss officials said that the victims in this case did not have victim advocates, but updates on the investigation were provided.

“The Army provides regular updates to crime victims through its prosecution teams and victim-witness liaisons, and did so in this case,” according to the statement. “As with all active investigations and pending litigation there are strict procedures in place to protect the integrity of the judicial process and the veracity of witness testimony.”

Perez and Morales-Sanchez were separated but still legally married to other people during their relationship. She said she had known him for some time before they began dating.

When Alianna died, El Paso, the west Texas city where Fort Bliss is located, began an investigation into the circumstances, but ceded jurisdiction of the case to Fort Bliss, according to the base. Military investigators uncovered the additional criminal behavior, including violence against Perez.

A military protective order was issued upon assuming the investigation, according to Fort Bliss. After violating that order, Morales-Sanchez was ordered into pretrial confinement Feb. 26, 2020, and he received 451 days of confinement credit to his sentence.

“I’m just so disappointed in the Army and I used to be very proud of serving,” Perez said. “I feel like a big problem with the Army and why people like this or cases like this happen is because they see the red flags and they don’t stop them.”

Morales-Sanchez joined the Army in March 2017 and served in the 1st Armored Division’s Combat Aviation Brigade, according to the charge sheet.