Army fires several Fort Hood leaders, including a two-star, following probe triggered by several deaths at the base 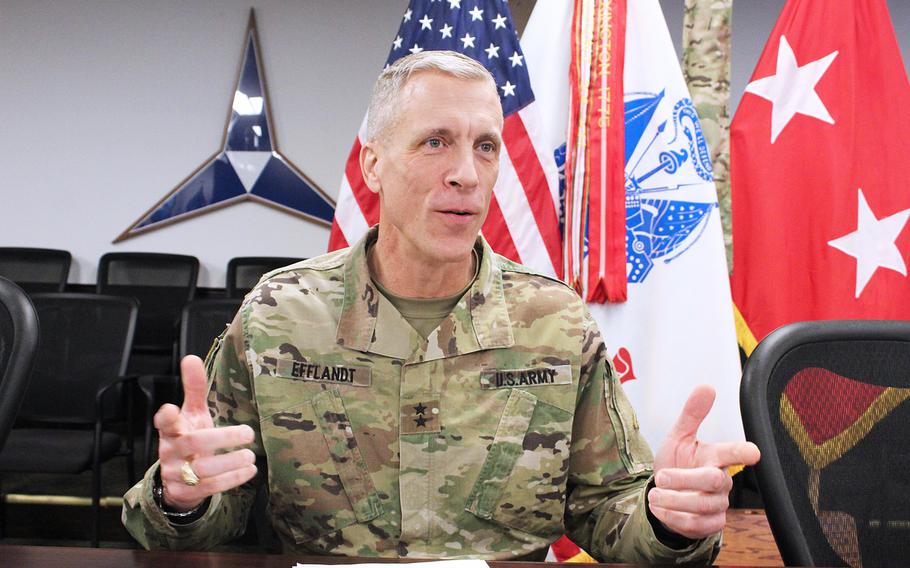 WASHINGTON — Army Secretary Ryan McCarthy said Tuesday that he had relieved or suspended 14 Army leaders at Fort Hood including a two-star general as a result of a probe into the command climate at the Texas installation launched amid a rash of deaths among soldiers.

“I have determined the issues at Fort Hood are directly related to leadership failures,” McCarthy said at the Pentagon. “Leaders drive culture, and are responsible for everything the unit does or does not happen to do. I am gravely disappointed that leaders failed to effectively create a climate that treated all soldiers with dignity and respect.”

The Army secretary said he has also suspended the leaders of Fort Hood’s 1st Cavalry Division — Maj. Gen Jeff Broadwater and Command Sgt. Maj. Thomas Kenny — pending the results of a new investigation into the unit’s command climate and implementation of the sexual assault prevention program.

Efflandt served as the base commander in the absence of its deployed top general, Lt. Gen. Pat White. Efflandt was supposed to move to Fort Bliss, Texas, during the summer and serve as commander of the 1st Armored Division. But he was replaced and remained at Fort Hood as the III Corps deputy commander for support while awaiting the results of several ongoing investigations.

White, commander of III Corps and Fort Hood, said Tuesday during a news conference at the base that he was given enough notice of the firings, which occurred Tuesday morning, to prepare a “compassion team” made up of a lawyer, a public affairs representative, a chaplain, a behavioral health representative and a cyber awareness expert.

“[Those fired] were notified with someone catching them coming out to make sure they are taken care of as well,” White said. “Now we will deal with the aftermath here in the command structure because there are people who will not be reporting to work tomorrow.” 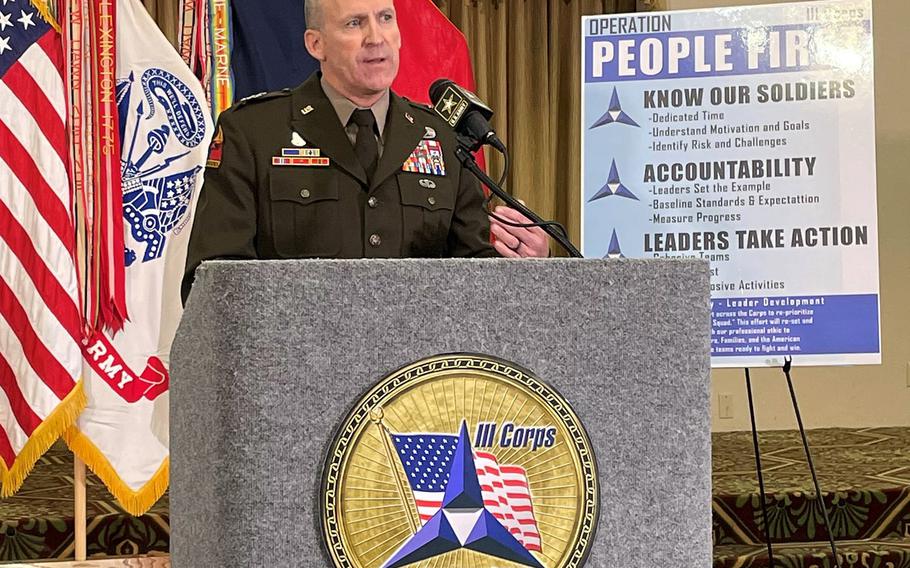 Lt. Gen. Pat White, commander of III Corps and Fort Hood, addresses the findings of an independent civilian-led report into the climate and culture of Fort Hood during a news conference Tuesday. White said he takes ownership of the findings and has already begun to take action to improve conditions for soldiers on the base. (Rose L. Thayer/Stars and Stripes)

The firings come following a release of a report from a civilian-led investigation that found Fort Hood soldiers have a lack of confidence in the SHARP program that has led to a fear of retaliation and significant underreporting of sexual assault and harassment cases, particularly within the enlisted ranks.

Fort Hood leadership knew or should have known of the high risk of harm to female soldiers, according to the report.

Army officials said Tuesday that they would not name the nine other soldiers fired or suspended after the probe because of their lesser ranks. Those soldiers serve between the squad and battalion level and face noncriminal, administrative punishments, the Army said in a statement.

McCarthy appointed five civilians to investigate the base in July as part of a Fort Hood Investigative Review Committee, which after three months identified the central Texas base to have a “deficient climate” and an “ineffective implementation” of the SHARP program.

“Soldiers assaulting and harassing other soldiers is contrary to Army values and requires a dramatic change in culture,” Chris Swecker, the committee chairman, said Tuesday. “The committee determined that, during the time period covered by our review, there was a permissive environment for sexual assault and sexual harassment at Fort Hood. We have recommended changes to the staffing, structure and implementation of the SHARP program at Fort Hood, and possibly beyond, to address deeply dysfunctional norms and regain soldiers’ trust.”

“Fort Hood and the Army as whole must do more to cultivate a culture of inclusivity and respect which values the contributions of all service members,” the investigators wrote.

McCarthy said he had accepted all of the investigation’s findings and would move for the Army to implement all of its recommendations. The Army secretary said he had established a group, dubbed the People First Task Force, to look at making those changes — many of which impact the entire Army — by March. The task force will be led by a three-star general.

The investigation was triggered by the disappearance and death of 20-year-old Spc. Vanessa Guillen, who went missing from Fort Hood on April 22 while working in an arms room with the 3rd Cavalry Regiment’s engineer squadron. Her remains were found June 30 alongside a river about 30 miles from the base.

Spc. Aaron Robinson, another soldier in Guillen’s squadron, killed her with a hammer, then moved her body, according to court documents. A second suspect, Cecily Aguilar, is in federal custody and accused of conspiracy to tamper with evidence in the case. Robinson shot himself dead July 1 when approached by civilian law enforcement in Killeen, the town just outside Fort Hood.

McCarthy said during an August visit to Fort Hood that he hoped the review committee could help shed light on why the base has the Army’s highest numbers of violent felonies, including sexual assault and homicide.

Since March, the deaths of five soldiers assigned to the Army base have been ruled homicides.

Looking back, the committee found Fort Hood’s Criminal Investigation Command detachment, known as CID, was not prepared to take on such cases. The committee found it to be “under-experienced and over-assigned,” which negatively impacted investigations of sex crimes and deaths.

The five members on the independent review committee — Swecker, Jonathan Harmon, Carrie Ricci, Queta Rodriguez and Jack White — discussed their findings during a Tuesday news conference at the Pentagon following remarks from the McCarthy and other top Army officials.

They said they conducted more than 600 interviews with soldiers at Fort Hood and surveyed another 31,000 as part of their probe. Among those interviewed were 503 female soldiers, among whom 93 revealed “credible allegations” of sexual assault. Only 59 of them reported the crime, the investigators said, citing widespread fear of retaliation against those who filed reports.

“One of the things that the soldiers at Fort Hood many of them needed was to be believed,” Ricci said. “And that was what we did — we listened. I want them to know we believe. And that was a really important takeaway was to believe them.”

The civilian committee will next face questions Wednesday from lawmakers during a hearing of the House Armed Services Committee’s subpanel on military personnel.

During White’s news conference at Fort Hood, he said he will implement as many of the report’s recommendations that he can at his level. To emphasize this to his leaders, White held a 6 a.m. formation with every battalion-level command team at Fort Hood.

“I expect you to be the change agent,” he said he told the leaders. “And if you’re not and we don’t get positive results, your work will be spoken for.”

That change includes creating an environment in which soldiers feel comfortable reporting sexual assault and harassment, White said, noting he’s posted his own phone number throughout the base to encourage victims to contact him directly if they don’t feel like their commander is listening.

McCarthy said White was not removed from his position because, during most of the time period examined by the Army, he was deployed for 13 months leading the counter-Islamic State fight in Iraq.

McCarthy also announced Tuesday that he had officially instituted a policy, creating a new category for soldiers who do not show up for duty. Instead of immediately being classified AWOL, soldiers who do not report for duty will be classified as “absent-unknown,” and commanders are now directed to launch an immediate effort to find the missing soldier.

Previously, soldiers who were missing for reasons that were unclear were automatically classified as AWOL, which Army officials said carried a negative connotation. Commanders also did not have the requirement to launch an immediate search effort for those soldiers.

Commanders can hold absent soldiers in that new status for up to 48 hours, according to the directive that McCarthy signed Nov. 17. If “a preponderance of evidence” exists that they are absent voluntarily, the soldier is to be reported AWOL. If a commander cannot determine whether the soldier has purposely not reported for duty, the soldier is classified as “duty status-whereabouts unknown,” or DUSTWUN, according to the directive.

McCarthy said the change, recommended by the committee, is meant to instill trust that the Army is serious about taking care of its people.

“This report, without a doubt, will cause the Army to change our culture,” he said. “Even though we are part of one of the most respected institutions in the world, living up to the American people's trust is something we have to do every day. I believe in this institution, and its officers, noncommissioned officers, soldiers, civilians and their families with every fiber of my being. I'm confident in our leaders’ ability to overcome this challenge, and to continue to win our nation's wars, while also caring for our people.”